Is There a Link Between Violent Video Games and Mental Illness?

I'll be the first to admit I'm a gamer. I love playing video games, especially open-world role playing games such as The Elder Scrolls series and the Assassin's Creed series. I'm even a member of the Video Game Voters Network, an organization dedicated to recognizing video games as free speech. So I make it a point to keep up on news related to video games.

You're probably wondering "What does this have to do with mental illness?" Well, according to the New York Daily News, video game addiction is often a symptom of depression or anxiety. 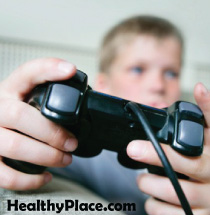 What I'm playing and how much of it I'm playing is a good indicator of my current mental health status. When I'm happy, I occasionally play a simulator or role playing game. When I'm depressed, I spend most of my waking hours playing fantasy games. When I'm starting to go psychotic, I play a video game with a dark theme or violent content, such as Grand Theft Auto: San Andreas or the Silent Scope series.

Dr. Kimberly Young, a psychologist and founder of the Center for Online and Internet Addiction in Bradford, Penn., told the paper:

"There definitely seems to be a correlation between violent game use and aggressive behavior. ... The reality is, these games must teach you something. ... When you're actively participating, looking at various weapons, getting reinforcement and recognition for your achievements from the game and from other players…I think it desensitizes you."

That said, I've never become violent due to a video game. But that doesn't mean some people don't. Dr. Michael Fraser, a clinical psychologist in New York City and professor at Weill Cornell Medical College, told the paper some people are more influenced than others.

"We wouldn't want anybody to think, when we use the term 'video game addiction' or 'compulsive gaming' that the problem lies in the video games, any more than the problem for an alcoholic lies in a can of beer," he said. "Many people can have one can of beer, and that's it. But others may have a biological predisposition towards addictive behavior in general."

Signs of a problem with violent video games

While not an official mental health diagnosis, the DSM-V contains a reference to "Internet Gaming Disorder" in its Conditions for Further Study section. The New York Daily News lists seven symptoms of a possible problem. They are:

There are many other symptoms. On-Line Gamers Anonymous offers a helpful questionnaire that may indicate whether or not you have a problem.

Why do some people have a problem?

A Chinese software association head, Liu Min, said in Play "In the hypothetical world created by such games, [gamers] become confident and gain satisfaction, which they cannot get in the real world." A paper in the Journal of Psychiatric Research argued that nearly 3 percent of gamers may experience some symptoms of pathological gaming. However, the paper argued that the games were a symptom of mental health problems and not the cause.

In other words, while there is a link between mental illness and excessive video game playing, correlation is not causation. The games are merely a symptom, not a cause.

APA Reference
Oberg, B. (2013, October 8). Is There a Link Between Violent Video Games and Mental Illness?, HealthyPlace. Retrieved on 2021, April 23 from https://www.healthyplace.com/blogs/borderline/2013/10/is-there-a-link-between-violent-video-games-and-mental-illness

The Struggle for Sanity and Sobriety: Dodging Bullets
Relearning How to Be Angry
autumn
January, 19 2016 at 7:47 am

Alot of people have addictions to video games