Self-Knowledge Is Not Enough To Treat BPD

In AA today, we were talking about the insanity behind substance abuse, a common symptom of borderline personality disorder (BPD). We agreed that self-knowledge is not enough to solve the various addictions we face in life, whether it be alcohol, self-injury or any other self-destructive behavior.

"Orange is not the new black." 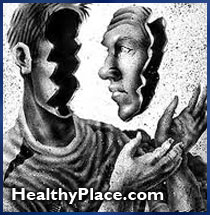 Although I've never been in jail, some people in my meeting have. For most of them, that was the wake-up call they needed to realize their addiction. As one said, "(Prison) orange is not the new black." It's not fashionable to have jails, institutions and death as your normal.

I knew I had a problem long before I quit drinking. It was serious enough that I drank myself into the psych ward a number of times. I had episodes in which I drank my grocery money. Finally, the hospital got sick of me showing up drunk and suicidal, and committed me to the state hospital system. I spent four months in the dual diagnosis unit at Richmond State Hospital in Richmond, Indiana. They were the worst four months of my life. That said, it worked--fear of getting sent back to Richmond State kept me sober for three years with no support.

Self-knowledge of my problem was not enough to solve my problem, though, and after three years I relapsed. This binge was not as severe as the last ones--I still had money for food and for the most part I managed to stay out of the hospital. But I finally checked myself in to rehab and sobered up. This time I agreed to go to AA meetings. That was four months ago. I haven't had a drink since.

"No matter how great the necessity or the wish."

The Big Book reads "Many of us felt that we had plenty of character. There was a tremendous urge to cease forever. Yet we found it impossible. This is the baffling feature of alcoholism as we know it--this utter inability to leave it alone, no matter how great the necessity or the wish."

Step One is admitting we are powerless over the negative coping skill--be it alcohol, drugs, or self-injury--and that our lives are unmanageable. This is a hard step to make, but it is also the most crucial. Admitting powerlessness and an unmanageable life will fire you up enough to do something about it, which will inspire you to go to any lengths to get relief from it. From there the rest of the steps flow naturally.

When it comes to borderline personality disorder, it is vital we realize self-knowledge, even if we acquire it, is not enough to treat the problem. We have to be willing to accept treatment, be it medication with therapy or therapy alone. We have to make an effort.

As the Big Book says, "Half measures availed us nothing." And they don't. A half-hearted effort to get better is understandable--we all know the saying "Better the devil you do know than the one you don't." But it won't work. You have to be dedicated to treatment.

That doesn't mean you'll always feel like you're making progress, but as one of my favorite movie lines says, "Even when you fall on your face you're still moving forward." You have to keep going, even when you feel like it's hopeless. Live every day like it's a reprieve from your illness, and you'll find that these reprieves turn into weeks, months, and eventually years.

Self-knowledge is not enough, but when work is added to it, the result is an abundant life.

APA Reference
Oberg, B. (2013, July 30). Self-Knowledge Is Not Enough To Treat BPD, HealthyPlace. Retrieved on 2022, June 29 from https://www.healthyplace.com/blogs/borderline/2013/07/self-knowledge-is-not-enough

A Deadly Belief: Myths About Suicide
Surviving Disruption
caroline
May, 25 2018 at 2:01 am