Operation No Restraint: How I Fought Back Against an Improper Restraint

If it had been just me, I probably could have ignored it. But it wasn't just me. During one of my many psychiatric hospitalizations, I observed what I believed was a systematic pattern of abuse of restraints. Patients were often restrained without the least restrictive means being tried and without a doctor's order or evaluation. They were often restrained for up to an hour, even if they were out of danger. I knew this was illegal. But how was I supposed to fight back?

Step One: Know the rules 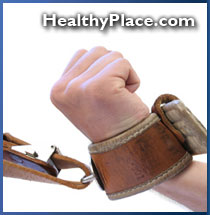 Under federal law, restraints should only be used to ensure the physical safety of the individual and/or others, and the least restrictive means must be used to restrain a patient.

1. “A physician trained in psychiatry or a LIP [licensed independent practitioner] should see the patient within one hour after restraints are initiated.”

2. “Restraints should be continued only for periods of up to one hour at a time and a face-to-face examination of the patient by the physician or LIP must occur prior to each time a restraint order is renewed.”

1. “Seclusion and restraint should be used only after other less restrictive techniques have been tried and failed, and only in response to violent behavior that creates extreme threats to life and safety.”

2. “Facilities should never use seclusion or restraint as punishment or for the convenience of staff.”

3. “Use of restraints and seclusion should always be implemented by experienced and trained staff, overseen by senior medical staff, approved by a physician, and be well-documented and justified in a consumer’s file.”

4. “Seclusion and restraining procedures should be used only for the amount of time needed to restore safety and security of the consumer and others.”

5. Consumers should be informed that specific behaviors may result in the use of restraining procedures or seclusion. Cooperation of the consumer with the procedure should be sought.

You have to know the rules in order to determine if they've been violated.

According to NAMI, a series of steps should be followed to fight back against an improper restraint:

•File a complaint with the Joint Commission on Accreditation of Healthcare Organizations (JCAHO) hotline at 1-800-994-6619 and/or complaint@jcaho.org

•File a complaint with your state’s health and hospital licensing agency.

•File a complaint with your U.S. Center for Medicaid and Medicare (CMS) regional office. The number can be obtained by calling the CMS Office of Medicare Customer Assistance, 410-786-7413.

•Consider retaining an attorney if you believe your legal rights have been violated.

After researching the law and contacting the above-mentioned agencies, I waited.

Indiana Protection and Advocacy Service contacted me about a month later, IPAS reported that IPAS and the hospital did the following: a notice was placed on all inpatient units noting that hand mitts are a form of restraint; a clarification of the definition of restraint, including the types of restraint, would be presented to all new staff in aggression management training upon hiring and annually; the chart for restraint incidents would add a category for “other” restraints not commonly used; the Behavior Care Services Restraint Committee would monitor that those changes were made.

The Indiana State Department of Health contacted me in February of 2006, and sent me a five-page report detailing all the violations they found. ISDH ruled that I was restrained without a doctor’s order, I was not evaluated within an hour of being restrained, the staff were not trained in the type of restraint they used on me, one staff member on the psychiatric intensive care unit had no crisis intervention or restraint training, and the least restrictive means were not tried. In light of all this, the ISDH cited the hospital.

Sadly, there's not always a happy ending in these situations. In that case, you have to do whatever it takes to find closure.

APA Reference
Oberg, B. (2013, June 11). Operation No Restraint: How I Fought Back Against an Improper Restraint, HealthyPlace. Retrieved on 2022, August 13 from https://www.healthyplace.com/blogs/borderline/2013/06/operation-no-restraint-how-i-fought-back-against-an-improper-restraint

In Crisis? Here Are 3 Crisis Chat Lines to Try
What To Do When Waiting for Mental Health Services
cazylady
April, 28 2014 at 9:00 am

I totally understand. In just about every hospital i have been to, they have abused the use of seclusion and restraints. ONe time I was left in restaints for almost 24 hours. I felt degraded and I also witnessed others being given injections and tied down to the bed as weell. how is this humane treatmet? It is wrong and we need to stop it. i am glad people are starting to agree with me.

I've witnessed improper use of restraint and seclusion myself as well. After admitting myself to the psych unit of our local general hospital for hallucinations I attempted to kill myself, in retaliation the staff didn't allow me food for 3 days. When I tried to complain to a nurse that what she was doing was illegal (not allowing me to the cafeteria because I was a danger to myself, but refusing to bring me food), I was told I had 30 seconds to take myself "to the padded room and stay there or someone would be happy to help me get there"... This was also right after the hospital had been in the news for a female patient being raped while secluded and restrained in one of those rooms. The only reason I was given food near the end of day three was when a nurse supervisor walked into the unit and I ran to her for help before they could grab me.
Unfortunately, the main nurse that denied me food and kept me in seclusion wasn't fired but she was written up and disciplined.

Thank you for sharing your story. Sadly, some psych staff are on a power trip. The best way to fight back against those people is to know your rights and stand up for them.