Facing My Addiction: Overcoming the Past (pt. 2)

Facing my addiction to alcohol will involve a great deal of facing my past. Like my borderline personality disorder (BPD), my alcoholism did not develop overnight and a large part of the problem lies in past trauma. Just as my BPD will impact my treatment, so will the root of the problem: my past.

Past Trauma One: Abuse

One thing that will help is knowing that I am not alone. According to I Can't Get Over It by Dr. Aphrodite Matsakis, one in four people on average develop post-traumatic stress disorder (PTSD) in response to a trauma. Sixty-five percent of those experiencing non-sexual assault, 84 percent of battered women in shelters, and 25 to 92 percent of sexual assault survivors develop PTSD. Some, myself included, believe that BPD is a type of PTSD. Knowing that other people have the same problem is somewhat comforting. It means that there is a path out of the darkness. 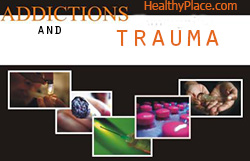 In 2008, I was committed to the state hospital system. I was sent to Richmond State Hospital in Richmond, Indiana, for dual diagnosis treatment. Unfortunately, the treatment was not a good fit for me because the unit I was on treated substance abuse, not mental illness, as the primary problem. This resulted in some of the treatment being traumatic.

For example, I have asthma. Although I had a prescription for an inhaler, the staff refused to fill it because they thought I was going to use it to get high (insert marijuana/inhaler joke here). Predictably, one day I had an asthma attack. Staff at first thought I was faking it, then told me they hadn't filled my inhaler. When it became obvious I was in danger, they opened another patient's inhaler and gave it to me. I'm not quite sure how many state laws that broke, but that unprofessional move could have cost me my life.

Another medical problem that led to psychiatric mistreatment was a back injury. I was in constant pain. You guessed it--they didn't want to give me anything for the pain because I might use it to get high. Although the pain was so bad it interfered with my ability to walk, staff refused to let me see a doctor. So I suffered debilitating pain for four months. (We found out later that my spine was out of alignment, a problem easily fixed by replacing the mattress and physical therapy--no narcotic painkillers or muscle relaxers necessary).

But the most traumatic part of the "treatment" was when I became suicidal. Although I told staff repeatedly that I was suicidal (as did my mother and other patients), they ignored me. The unit psychiatrist said that I had BPD and was making it up to get attention. I made an attempt, and only then did I get the treatment I needed.

With these incidents in mind, it's easy to understand why I'm afraid of treatment. I don't want treatment to be a replay of my stay at Richmond.

So where do I go?

So where do I go from here? I have to decide what's more important--a chaotic life without the risk of being hurt again by treatment, or a sober life with treatment. It's not an easy decision. But it is an important one. And it is ultimately mine alone.

I'll be honest--I'm scared. I'm scared I'll be mistreated again, I'm scared the stress will cause my psychiatric symptoms will come back with a vengeance, I'm scared that I'll relapse and get kicked out of the program. But I can't let fear get the better of me. I have to face my fear. And to do that, I have to face and overcome my past.

APA Reference
Oberg, B. (2012, October 16). Facing My Addiction: Overcoming the Past (pt. 2), HealthyPlace. Retrieved on 2022, August 14 from https://www.healthyplace.com/blogs/borderline/2012/10/facing-my-addiction-overcoming-the-past-pt-2

Praying for you now. I was diagnosed 11 years ago with major depressive disorder which was then changed to bipolar disorder 6 years later. I have been sober for 8 years, and about 2 years ago I was diagnosed with BPD. I have ongoing support for both my addiction and mental illness issues. You're definitely not alone.
For me, sobriety had to come first in order for my psych meds to work. Once I was sober and my meds were doing their job, then and only then, was I physically and mentally able to put forth the effort needed in counseling to begin to heal from my PTSD/abuse issues (which manifested themselves as BPD traits and anxiety/panic disorders.)
Cognitively, I couldn't get any benefit from therapy when I was still getting drunk/high and/or when my brain's natural chemicals were out of balance due to the bipolar depression.
DBT has saved me from my BPD. Still working on the anxiety disorders, however. Getting there, and hoping you will, too.