Today is my birthday, and it's left me in a somewhat reflective mood. For someone as young as I am, I've accomplished a lot. I've published a book about military desertion for reasons of conscience. I've won three awards for my writing. It's not bad for someone who hasn't yet hit 35.

But I have borderline personality disorder (BPD), and a Demanding Parent mode that says "not good enough".

What is the Demanding Parent mode? 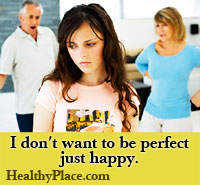 Schema therapy incorporates the belief that people with BPD have different modes of operation, such as the Punitive Parent and the Abandoned/Vulnerable Child. I have a strong Demanding Parent mode. According to SchemaTherapy.com, the Demanding Parent mode draws its strength from unrelenting standards. Unrelenting standards in schema therapy are "the underlying belief that one must strive to meet very high internalized standards of behavior and performance, usually to avoid criticism. Typically results in feelings of pressure or difficulty slowing down; and in hypercriticalness toward oneself and others. Must involve significant impairment in: pleasure, relaxation, health, self-esteem, sense of accomplishment, or satisfying relationships. Unrelenting standards typically present as: (a) perfectionism, inordinate attention to detail, or an underestimate of how good one's own performance is relative to the norm; (b) rigid rules and 'shoulds' in many areas of life, including unrealistically high moral, ethical, cultural, or religious precepts; or (c) preoccupation with time and efficiency, so that more can be accomplished."

This is basically a fancy way of saying I believe I have to work exceptionally hard to meet extremely high internal standards in order to avoid being disliked, shamed, or criticized. I feel like my best is never good enough.

You may feel the same way. So how do we fight back against this negative mode?

Arguing with the Demanding Parent

The Demanding Parent is a liar. Your best is good enough simply because it's your best. Believing this may be difficult, but it is vital. In order for the Demanding Parent to have no power over you, it is essential to recognize what it says as a lie.

No one is called to be perfect. According to my religion, the only perfect person was Jesus, and if we think we're him we've got problems a lot more serious than BPD. You are not called to be perfect. You are called to do your best and to be happy with that. Doing this means accepting your imperfections, which is another way to fight the Demanding Parent.

One imperfection I've struggled to accept is my tendency to forget the names of other people. It's embarrassing. It takes me about a month to learn someone's name and face and to put the two together, and even then it's no guarantee I'll get it right. I've accepted that I'm not good at this and readily admit it when I'm talking to a person. It's an imperfection that, while I don't like it, I've accepted.

You may have something similar about yourself that you don't like. Do your best to work with it and compensate for it. Sometimes you can overcome it, sometimes not. The important thing is to accept it as an imperfection, because acceptance limits the power of the Demanding Parent. Acceptance turns what's so into "So what?" So what if I'm bad with names and faces? I do my best and readily accept that I'm not good at it, and people are generally understanding. So what if you can't count backwards from 100 by sevens? Do your best and accept that this is a difficult feat.

The Demanding Parent does not have to run your life.

Came to this site by way of pinterest. Nice to see so much progress on such a remarkable disorder. My name is Ellen, I suffer from BPD, Major Depression, anxiety and PTSD. I have been depressed since I was a young teen and have always had problems with self worth and image. I am a survivor of abuse and other contributing factors. I was very adept at disassociation and compartmentalization, my diagnosis came after my defenses wore out. I am 70 now, better, but..still