It is with a heavy heart that I write this week's post. I recently suffered the loss of a loved one--my great-aunt Lu, my Grandma Oberg's twin sister. While this loss has been tempered by the birth of a new nephew, it made me think of how bereavement can affect psychiatric symptoms. Short version: our psychiatric symptoms can flare up when we suffer any kind of loss. 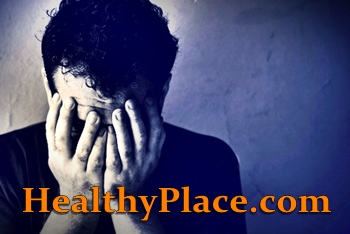 As I write this, I'm still numb to the whole thing. Aunt Lu was 95 and in poor health, so it's not like her death was unexpected. Yet it still hasn't sunk in that she's dead. I'm in denial, which is one of the first stages of grief--the other four are anger, depression, bargaining and acceptance.

Denial is a protective skill that keeps us from feeling too much pain at once. I think the main reason I'm still in denial is because a close friend of mine moved away two days before the death, and two losses at once is hard for anyone to bear, let alone someone with a mental illness. Denial, in that sense, is a coping skill. That's why so many of us feel it when we suffer any kind of loss.

Anger is another coping skill common in bereavement. It's easier to be angry at the person who died than it is to accept that death is inevitable. It is also easier to be anger at someone concrete than an abstract concept such as cancer. It's also easier to be angry at doctors than it is at life. In my case, I'm angry at myself because I couldn't make it to the funeral (I had no transportation to the state it was in). Anger--whether it's at self, the deceased, the medical professionals or
God--is normal when life punches us in the gut.

Depression is another common response to bereavement. For those of us with a mental illness, however, the depression can be more intense. We are at risk of forgetting it is possible to feel any other way, which can lead to a suicidal crisis. That's why I spent this past weekend in the hospital--I just couldn't cope with all the stress I was under. The death, coupled with my friend's moving away and a lack of sleep lasting several days, simply pushed me over the edge.

It is important to know the symptoms of depression so you can recognize it. Recognizing depression is key to defeating it. Depression is characterized by feelings of sadness, change in appetite, change in sleep patterns, significant change in weight, loneliness and thoughts of death or suicide. If you have thoughts of death or suicide, consult your psychiatrist and/or therapist immediately. Otherwise, understand that your depression is probably temporary and can be helped by talking to a bereavement counselor. Allow yourself time to mourn, but don't let it spiral out of control.

Bargaining is a symptom of loss that I know next to nothing about. But I believe the popularity of mediums and Ouija boards and the like are a symptom of this. Who doesn't want to be sure their loved one is all right in the Afterlife? It's a way of reassuring ourselves that death is not the end. It's like saying "If I could just talk to him/her one more time..." (Note: As a Christian, I don't condone the occult--this is just my observation). Truth be told, I feel that way about my friend Matt, who died by his own hand nearly twelve years ago. If I could just talk to him and know for sure he's at peace...

I've found that religious faith is immensely helpful in the grieving process. It is comforting to know that the grave is not the end, that there is something beyond this life. Yet even if you're not religious, it can be comforting to know that the suffering of the deceased is over. My great-aunt lived a long, full life, and I believe she has been re-united with her husband and twin sister. That makes it easier. But even if I didn't believe in an afterlife, I could find comfort in the fact that she's no longer sick and in a nursing home she didn't really care for.

Give yourself time to mourn. Allow yourself to feel the loss while keeping perspective. It does get better.

APA Reference
Oberg, B. (2012, August 7). Grieving a Loss: Mental Illness and Bereavement, HealthyPlace. Retrieved on 2022, May 23 from https://www.healthyplace.com/blogs/borderline/2012/08/grieving-a-loss-mental-illness-and-bereavement

Depression: Why Do I Feel This Way?
Advice to a Young Psychiatrist About BPD