The Borderline Who Cried Wolf

I recently spent three days in "Crisis Respite" at the hospital. While there, I saw something disturbing--security escorting a patient out of the psychiatric extended observation unit. Due to the confined space and raised voices, I saw a great deal of the drama.

This patient, who may or may not have borderline personality disorder (BPD), refused to follow the program rules. She refused all offers of placement in a halfway house. She even called the suicide hotline, repeatedly saying "They're going to discharge me even though they know I'm going to take my life when I leave here."

Staff called security, who escorted the woman off the unit for her discharge.

Where should one draw the line?

I've mentally replayed this incident several times. I want to believe staff knew what they were doing. But was it the right thing to do? I don't know.

In the staff's defense, she wouldn't follow program rules or accept help. She'd been evaluated by two psychiatrists, including one who is an expert in BPD--they'd recommended discharge. What more could the staff have done?

However, the situation brought back memories. When I was a patient at Richmond State Hospital in Richmond, Ind., I went through a severe suicidal crisis. The staff ignored me, as well as multiple other patients and my mother. After I recovered from the attempt, the psychiatrist explained "We had another borderline here, and every other word out of her mouth was 'suicide', so we assumed you were the same way."

On very rare occasions, a person will fake a suicidal crisis, and in these rare occasions BPD is almost always a factor. However, Suicide Prevention 101 teaches "Never take a suicide threat lightly." Where should the mental health system draw the line?

The case for automatic hospitalization 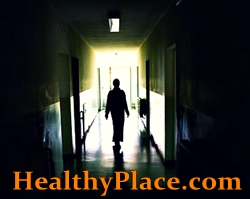 We can argue that all suicide threats result in immediate hospitalization. That's basically what the law is now. Psychiatrists are human and make mistakes, but a human life is too great a gamble.

It's a myth that someone talking about suicide won't do it. That's why mental health professionals are trained to take all talk of suicide seriously. Individuals in a suicidal crisis are the psychiatric equivalent of a person with crushing chest pain and difficulty breathing: there's a chance it's not anything serious, but the symptoms should be treated as life-threatening until proven otherwise.

The case for physician discretion

When I was a patient on the borderline unit at LaRue D. Carter Memorial Hospital in Indianapolis, staff were trained to triage our distress levels. While all threats of self-harm were taken seriously, our baseline was used to determine symptom severity.

Staff knew our history and had special training in working with patients with BPD. They used discretion to determine which patient needed what protective measures.

The mental health system has limited resources. Treatment should go to those most in need. How that is determined, however, is difficult. The system risks overextending if all threats result in immediate hospitalization. However, when human life is at stake, we can not ethically deny treatment just because of an extremely rare chance someone might be faking.

It's a classic no-win situation. What should we as a society do?

APA Reference
Oberg, B. (2011, April 19). The Borderline Who Cried Wolf, HealthyPlace. Retrieved on 2022, May 29 from https://www.healthyplace.com/blogs/borderline/2011/04/the-borderline-who-cried-wolf

When Convenience Trumps Treatment: The Abuse of Psychiatric Restraints
Borderline Personality Disorder, Personal Responsibility and Identity
Betty
May, 28 2012 at 10:30 am

I realise I'm commenting very late (!) but would like to share a thought on this, relating to the idea of 'crying wolf'. As we all know, the original story goes that the boy kept crying wolf when there was no wolf, eventually people stopped answering his cries, and when a real wolf turned up no-one came and it ate him.
But what if it was different? What if what really happened was this: There WAS a wolf, the boy cries out, and all the people come running. The wolf runs off, scared of all the commotion. Relieved to have company in the dark night, and frightened of the wolf returning, the boy is very upset when they all leave again. Later the wolf returns, and again he cries out. The same thing happens. Each time the wolf returns, he cries out for help, the people come, and the wolf runs away when it sees them coming. Eventually, they ignore the boys croes as they don't believe this IS a wolf.
Then we know what happens.

Never thought of it that way before. Thank you for sharing.

shot 'em. George W.Bush sorry. let them sit at the facility, but you must be honest with them why. The result of the why may tell a story. Otherwise, why are u asking. Use your head and make the call.