Mental Health Treatment and The High Price of Cutting Costs

I rely on public transportation, which in Indianapolis means the bus. Unfortunately, our bus system is not exactly stellar. Case in point: this bench-less bus stop next to a shopping cart corral.

The problem? Lack of funding. The result? Multiply this by several hundred and you have an idea.

Lack of funding for the mental health system is not as visible as this bus stop, but it is just as real.

[caption id="attachment_276" align="alignnone" width="315" caption="A lack of appropriate funding can affects service quality, whether it is public transportation or the mental health system."] 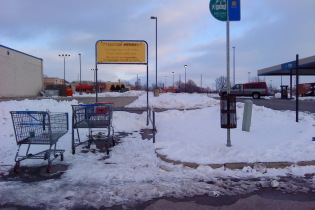 The consequences include a lack of talented mental health treatment providers, difficulty accessing treatment and an overburdened prison system.

The psychiatrist is a felon

One result is a lack of excellent mental health professionals, which results in a "fill the boots" mentality.

When I was at Indiana's Richmond State Hospital, I was assigned a psychiatrist I rarely saw. He assumed--based on my diagnosis of borderline personality disorder (BPD) and his experience with another BPD patient--that I was making up suicidal threats in order to get attention. The fact other people told him I was suicidal apparently meant nothing.

A mistake like that will not have a happy ending. I made a suicide attempt.

I later learned that he was convicted of Medicaid fraud and spent time in federal prison, allegedly billing for services he didn't provide.

Why did the State of Indiana, knowing this, give him a license? My guess is he was available and affordable.

A report by the Mentor Research Institute, Community Crisis and Emergency Services: Problems and Advantages, discusses problems with an underfunded mental health system.

"Crisis and mental health triage centers are increasingly run by businesses that make higher profits when fewer services are provided," the report states. "Services may be rationed using 'invisible' (unknown) and informal criteria driven by the organization's administrative and financial goals. These criteria can override professional judgment and recommendations."

BPD is expensive. We are often hospitalized and rely heavily on outpatient services. It's cheaper for the insurance companies to give us a death sentence and call it a pre-existing condition.

Ironically, the Mentor report observes "The cost and impact of limiting and denying necessary services can be as high as 30 percent of the total health care cost. There is considerable argument that the cost of limiting services exceeds the cost of the services denied in many cases."

Where is a person with a severe mental illness, difficulty finding mental health treatment and often not receiving the right kind of treatment going to go?

In 1992, the National Alliance on Mental Illness and the Public Citizen's Health Research Group co-authored a report titled Criminalization of the Seriously Mentally Ill: The Abuse of Jails as Mental Hospitals. The report found that nearly 30 percent of the nation's jails routinely held individuals with severe mental illness who were not facing criminal charges.

These people were not criminals being held for trial. They were people who needed psychiatric treatment, and were waiting for an open hospital bed in the only structured environment available.

Sadly, the trend continues. People are locked up because a bed at a psychiatric facility isn't available, and the only structured environment available is jail.

So what do we do about paying for mental health treatment?

Part of the problem is that our elected officials like to play shell games. The pea is tax money. The shells are access to treatment, affordability of treatment and low taxes. Taxpayers are the mark convinced they'll come out ahead, not realizing that the pea has vanished from the table.

No one's winning in this situation because no one's challenged these rules. While it may not be enjoyable to admit to being swindled, silence only ensures there will be other victims.

Funding for the mental health system is the same way. No one likes paying taxes. But if we point out the corruption of our government and demand a fair system for all, we actually have a chance. It all starts with one person speaking out.

The government has added laws and its getting crazy. I do hope that this medical reform will work out. People are already getting confused with the new things.