Sometimes you have to get creative to solve problems related to the symptoms of borderline personality disorder (BPD).

When I was in inpatient schema therapy, patients were encouraged to help each other solve problems. My friend A.B. was rapidly going broke. Like many people with BPD, A.B. had trouble refusing requests--and one patient on another unit kept asking her for money. While she was addressing this issue in therapy, how could she hang on to her money in the meantime?

I quickly scrawled a "Temporary Transfer of Funds Request", or "Form ST1D". I smiled, handed it to A.B. and said "Make her fill this out." 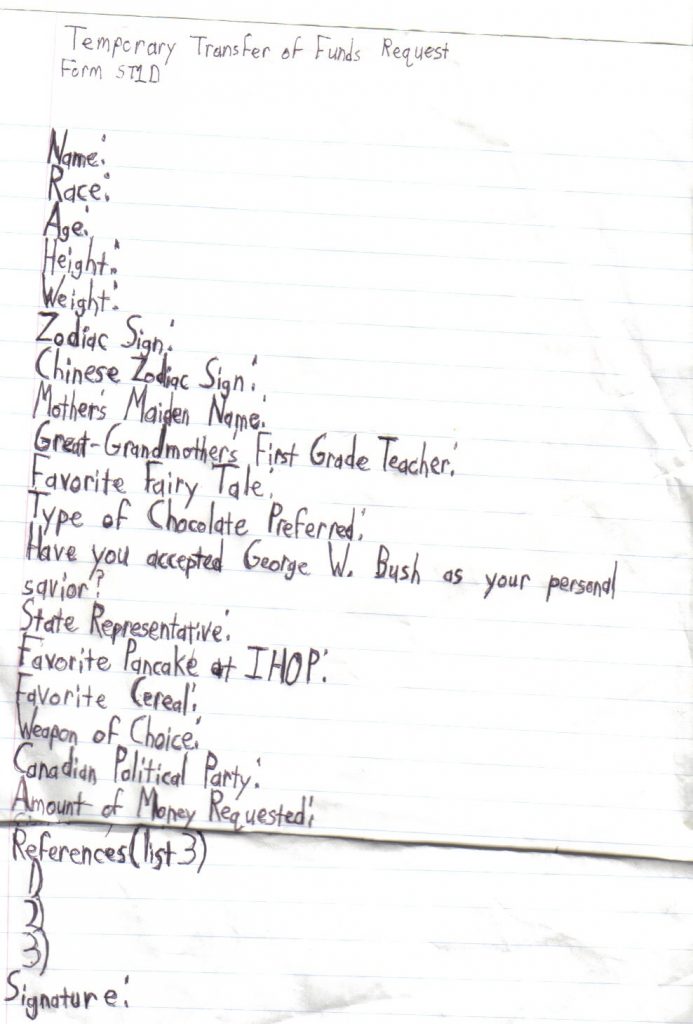 When A.B. went to the vending machines that day, she was armed with the form. When the request came, she held out the form. The patient looked at it, then at A.B., then walked away. She never asked A.B. for money again.

Some suggestions for short-term fixes

Sometimes you need a temporary solution for problems you're working on in therapy.

Smoking too heavily as a coping skill? You're not alone--according to an entry on about.com, people with BPD are more likely to smoke a pack of cigarettes per day than people without the disorder. The 1970s TV detective, Kojak, may have a solution. According to mentalfloss.com's "Amazing Fact" generator, the character sucked on lollipops because the actor was trying to quit smoking.

Be careful with that, though, as obesity is also a complication of BPD.

Do you want to self-harm? There are a number of solutions--for example, drawing on yourself with a red marker. I haven't had much luck with that, but it works for some people. Another potential solution is eating a whole clove of garlic. There's a reason for the saying "Shallots are for babies, onions are for men, garlic is for heroes."

Do you feel as if you're stupid? Sometimes, a visit to a site like DumbWarnings.com can help. These warnings often exist because someone did something monumentally stupid. You might feel better about yourself knowing you're not the inspiration behind the chain saw warning "Do not attempt to stop chain with your hands or genitals" or "Do not spray in eyes" on window cleaning solution.

By the way, you're not the only one who does this. According to Wikipedia, this is called schadenfreude, or "pleasure derived from the misfortunes of others". The musical Avenue Q even has a song dedicated to this social fact.

Short-term fixes, however, are just that--short-term. They are not meant to be a permanent solution. It is important to work on the issue behind the problem in therapy. That takes time.

Eventually A.B. learned how to say no to requests. Whatever the problem requiring the short-term fix is, you can overcome it as long as you keep working on solving it long-term in therapy.

What Can a Carrot Teach Us About Borderline Personality Disorder?
Can One Put A Price On The Right to Heal?
john
September, 17 2015 at 11:57 am

Am the happiest father on earth,my son was once suffering from the problem of Borderline personality disorder,difficulties controlling his emotions and he also have severely distorted self-image and feel worthless.which has affected his education,i have gave him different medication, but there was no solution. then i got the contact of Dr Benard and i told him about my son problem, the he sent me the cure and my son too it for two weeks and that was the cure to it.now my son is living a normal life am so happy,any one with such problem should contact him on benardleo13@gmail.com

Quiet usefull tips, especially the one about the 'feeling stupid' feeling..