The Stigma of Being Bipolar

My name is not Cristina Fender. It’s an alias I use when I’m writing. I use an alias because I’m afraid of what would happen if my real name was revealed. Would I be ridiculed for being bipolar? The stigma of having bipolar disorder is so great that I stay in hiding. I stay in hiding mostly for my family’s sake. What would happen to my children if I came out of the closet? 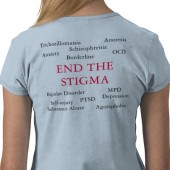 I would rather come out of hiding now, but what I’ve written is embedded in Internet Land.

I’m not ashamed that I am bipolar, but to reveal it seems shameful. Bipolar Disorder is one of the top two mental illnesses in the world. Instead of being understood, I would be berated for all I have done because of my bipolar disorder. It’s shameful that I’ve self-medicated in the past (read more about bipolar disorder and self-medication). But, in the past, it was all I could do to stay afloat.

When an article I wrote came out I was so ashamed.

People commented on how I was a horrible mother, how out-of-control I was. I was out-of-control, but my bipolar medications weren't doing their job. It was a look into my life. But, I no longer live that life. I live clean now. I drink an occasional glass of wine and that's it.

My close family knows my secret (that I'm bipolar). My in-laws and my aunts know, too. But, other friends and family do not know that I’m bipolar. My husband looks at me inquisitively when I tell him that no one else knows. He doesn’t understand why it has to be so secret.

I’m afraid that they will look at me differently if I tell them. I don’t want to be considered crazy. I’m not crazy, especially now that I seem to be recovering well. If only the entire world would look at it like it’s a medical condition, then I would be more inclined to tell people. It is a medical condition, but until the entire community views it as such there will always be stigma attached to bipolar disorder.

My hope is that someday I will be more comfortable and be able to tell more people about my disorder. Bipolar Disorder shouldn’t be a shameful thing. We all have our ups and our downs in life. Mine just have been more than others’. I shouldn’t feel ashamed, and, yet, I do. It’s not like it’s something I can help. It’s like having diabetes or heart disease. I wouldn’t be ashamed to say that.

I had an opening to tell my very good friend of over 15 years. She asked me why I chose social work. I glossed over the explanation omitting that I’m bipolar. I just felt like a liar for not telling her, but I felt like it was so private. Telling her I was bipolar would’ve opened up a can of worms. I don’t know if I’m ready for that can to open. It may stay closed my entire life. I just don't know yet.

APA Reference
Fender, C. (2010, April 19). The Stigma of Being Bipolar, HealthyPlace. Retrieved on 2022, September 27 from https://www.healthyplace.com/blogs/bipolarvida/2010/04/the-stigma-of-being-bipolar

I am sorry you made that mistake. You took a big chance and were sorely disappointed by these people. At least you had the guts...
I would not tell too many people because of the stigma attached. I have had neighbors treat me poorly after they knew, as well as close friends dumping me (in my early 20s before people understood anything about the illness). Not that people wouldn't have run away today. I'll never know.
It is fear that propels people to stay away. People may not mean to be stupid regarding mental illness; it is not understood well. Some people may think you should tell everyone because you are doing a disservice to yourself and others with the disease. Sometimes I think that, but I fought enough battles with being bipolar and agoraphobic, I don't need the added burden of explaining myself to people who just don't get it. They never will get it unless they have the illness or they intimately know someone with it. Support groups are probably the best way to vent/get information.
A very big hug to you....

I made the mistake of telling some of my co workers and from then on I was never treated the same. In fact, I later resigned because of it.

Great article. I, however, came out of my shell when diagnosed in 98 with Bipolar and have never looked back. I want everyone to know because I feel as if hiding behind something is lying and heck if I want to go through life that way. The other day at the grocery store I a lady in front of me was talking inappropriately about mental illness. I told her mental illness is no different then someone with cancer. It should be viewed the same way. She was rude, but I felt good that I got my point across. Looking forward to following you more.
Beth Hoffhanker on Facebook

Hi everyone and especially Cristina Fender!
My real name is Helena Smole. I come from Slovenia (Eastern Europe). I was diagnosed 14 years ago. It takes time, but eventually you discover what other people in this discussion have said above already: You tell and you wait what happens. The "friends" that go away, because they cannot take it, are a waste of your time. I scared quite some guys away with my diagnosis, but the one that eventually married me is absolutely amazing. Thus the mental illness itself actually helped me pick the right guy. So again - the other guys were my waste if time.
The only exception would be a job interview. I would advise you to keep it a secret and tell later, when the boss and other colleagues at work get to know you as a personality. For the bipolar disorder has nothing to do with your personality. It's a bio-chemical imbalance in your brain. Like diabetes in a chemical imbalance in your blood.
You can read more about my life with the schizoaffective disorder (= mixture of schizophrenia and bipolar) in my blog: http://schizoaffective-helen.blogspot.com/
Or you can wait for a half a year or so and read my book that is curently beings illustrated.
My book concetrates on "inner de-stigmatisation" which in short means: "I love myself just the way I am, the mental illness included."
Self-medication is another thing though. I wouldn't even call it that way. I would say: "I am addicted to alcohol or illegal drugs. I will get professional help on this. Today."
Take care
Helena Smole (I am also on Facebook)

I too was scared to tell people about having bipolar (I have bipolar I) but I knew that my episodes told a story of some sort that would leave people wondering what was wrong with me so I decided it was better that they know and learn about it then to think I was crazy. This way I was in control even though sometimes I could loose control or become depressed and not want to see anyone. Not telling people is not an option I don't think because they know something is wrong it just leaves them wondering and that is not healthy. Take charge of your life and don't be afraid, most people will understand, and those that don't well they weren't your real friends to begin with.

Veronica,
I'm glad that you found the courage to tell your story.
I think I hide my bipolar well and so I don't feel like I have anything to explain. The only people who needed an explanation was my immediate family.
Maybe someday I'll find the courage to say my story.
Cristina

Well bipolar is challenging yes my mom is. Scary cause its genetic

Maddy,
One in four people will get bipolar from a parent.
Cristina

To be honest with you I used to think the same way. Both my parents and therapist told me to never tell anyone else about my Bipolar Disorder for fear of "misunderstanding" and potential abuse.
The fact is, we need to be open about our Bipolar Disorder (or other mental issues) because it is up to us to show the world that we are all humans. We need to put a human face onto mental illness and educate the population, regardless how hard it is, because without our voice too many people will go unnoticed, unchecked and unwanted.
When I finally told my closest friend that I was Bipolar, her first reaction was "Oh, one of my Exs was Biploar. I know about that." Instead of prodding me or berating me with pointless questions, she accepted my decision to tell her and we continued on. Our friendship was not dampened, but rather it actually became stronger because we could connect to each other and realize that well, life is not normal.
I understand, however, that this is a hard decision to make, but in my honest opinion it is one that more people should try. The fact that you are open about your Bipolar disorder in this blog is awesome, we need more people like you to spread the word.
Dave.

Dear Cristina,
I was diagnosed as bipolar about 15 years ago. Right now, I live a completely normal life with Lithium and Risperdal.

Chris,
What kind of side effects does Risperdal have?
Cristina

Hi Christina, I've been following your posts for a while and I must say they're so helpful! My husband is bipolar. We have kept it a secret from most people, besides our immediate family, because we've had negative experiences in the past when he opened up to one of our - supposedly! - good friends.
It's true - there still is a stigma with mental disorders and as long as people can't accept it as a medical condition, there will always be a stigma :(
Keep writin'!!