Anxiety Symptoms Can Make You Look Like a Liar

Anxiety symptoms can sometime come across like we're lying. In my third year of university I was accused by a flatmate of stealing a five pound note from a collection that, as a flat, we had scraped together for a group Easter meal. I may have been mistaken for lying because of my anxiety symptoms. Not a huge amount, but this incident continues to hurt me long into my graduate life.

Incidentally, I have never stolen anything in my life and am pretty much law abiding to the point of tedium. Once, I accidentally left a cafe in a daydream without paying for my coffee. I was almost home when I realised my mistake and literally sprinted back to pay, apologise and give a hefty tip. My heart still races at the thought of the life of crime and recklessness that I might have embarked upon if I had not realised in time (Dealing With Catastrophic Thinking And Anxiety).

It is strange how such a humiliating incident can become so cruelly and deeply embedded in your memory. I can remember the moment of accusation with a vividness that I can’t recall first meeting my partner or experiencing a clear night full of stars. I was sitting in my dreary student living room. I can still smell the cheap beer stains on the worn sofa. My flatmate marched in and asked, shaking with rage and said, “Have you taken five pounds from the Easter collection?”

There were others in the room but the question was aimed, squarely, unmistakably, at me. These words and their implications took a few days to hit me.

I am bad at conflict and prefer to maintain a veneer of politeness with those who I do not know very well. So that afternoon, and then on until the end of term, I kept up a thin layer of cheery, breezy brightness whilst, beneath, my nerves were pulled as taut as violin strings. I chose to ignore the flatmate’s suspicious looks or her continued, whispered accusations as I left a room; or, rather, I chose to block out how they made me feel. I did not confront her or explain myself and do not think that at the time I would have been capable of doing so. It is difficult enough to tell close friends you have a mental health issue, let alone to confide in a casual acquaintance. 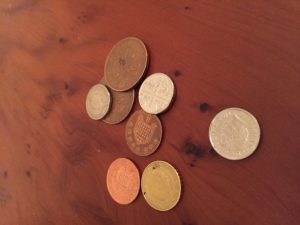 Looking back with the perspective of the years, I can completely understand why I was perceived to be “suspicious.” I wasn’t exactly the type of wholesome university student you find beaming from the front cover of a glossy school prospectus. My anxiety and depression were pretty bad during this particular time. I was self-harming, agoraphobic and binge eating all while trying, desperately, to appear to be “normal.” The way in which I was communicating with others often felt curiously separate from myself (Dissociation And Anxiety). My mouth was working more or less on autopilot whilst my brain whirred away at the back, exhausted and frantic. As a result, my words didn’t always make complete sense. I was told more than once that my laughter rang false and my smile looked plastered on but the alternative was to let the despair creep and set into my features, to let the broken part of me win. These symptoms of my anxiety made it look like I was lying.

Why Anxiety Symptoms Come Across as Lying

If this had been a predictable teen drama then I would have have been the untrustworthy girl, the girl with secrets or an agenda. If it had been a horror film then my flatmate may well have walked in on me boiling a rabbit over the stove. News reports tend to pour over the everyday eccentricities and “strangeness” of a criminal, even before they have been convicted. In reality, my only plan was to get on well with those around me and secure a good grade in my final exams. An ambition, perhaps, not too dissimilar to students without mental health problems yet one that felt, at times, to be 1000 times more difficult. I do not blame the girl who accused me of stealing all those years ago. I blame society for giving young people narrow definitions of what is acceptable behaviour (Stigma and Discrimination: The Effect of Stigma). I blame popular culture for lazily depicting those with psychological problems as being dangerous and deceitful.

I normally write for this blog with the primary intention of conversing with those who suffer from anxiety and, as always, I welcome their thoughts. However, in this particular blog post, I would also like to address those who may not necessarily have experienced mental health issues but find themselves working, living or socialising with those who do. I believe that it is vital to increase understanding amongst such people in order to create greater empathy and less incidents such as the one that I have described (Is Anxiety Poisoning Your Relationships?).

If you currently know somebody who you believe may be suffering from mental health problems such as anxiety, then please think twice before making negative assumptions about them. I wholeheartedly understand that it can be difficult to comprehend how such a person might be feeling or thinking, particularly if you, yourself, cannot relate. However, make sure to remember that it is always important to separate the person from the condition. Most importantly of all, reserve judgement and resist stereotyping (Living With People Who Don't Understand Your Anxiety). Know that even the smallest of gestures can mean more than you might realise to a person who is struggling. A kind word or a warm hello really can make all the difference.

A Video about Negative Assumptions of Anxiety Symptoms

APA Reference
Banim, J. (2015, December 2). Anxiety Symptoms Can Make You Look Like a Liar, HealthyPlace. Retrieved on 2022, August 10 from https://www.healthyplace.com/blogs/anxiety-schmanxiety/2015/12/mistaken-identity-anxiety-sufferers-being-mistaken-for-being-false-in-the-eyes-of-outsiders

Is There Room for Gratitude in an Anxious Brain?
Caffeine's Effects on Anxiety and Anxiety Disorders
SadSingleMom
September, 11 2017 at 3:23 am

I find myself often over analyzing and over explaining simple situations and being accused of trying to mislead others or lying because "why give so many details" it is maddening. Then when I get upset and cry or a panic attack is triggered I'm accused further of definitely being guilty of lying because "why would you freak out so much if you're being honest". I don't know how to explain it without being accused of lying more for continuing to over explain.

Same problem! I am so terrified of people thinking I'm a freak, that I have slowly shut myself out of other people's lives. If it wasn't for church, I would almost never leave my home. It's just easier this way. The anxiety, even with meds, just doesn't make it worthwhile to have to deal with real or imagined social rejection. Thank God for my cats!! At least they don't care if I'm weird!

Very thoughtful and insightful article. And only reinforces that Anxiety is very real and people suffer differently. While i never been accused of lying ( i don't think) but sadly i have judged others based on many of the behaviours mentioned.

It's not that you appear to be lying, it's that symptoms of anxiety can seem similar to those of deception, and I think that's an important distinction to make.

I go through the same thing. When I am under pressure then anxiety levels go through the roof. I would never take a lie-detectors test because I know I would fail. They could convince me that I stole a horse back in year 1822. I have to learn to take my time to speak when anxiety is high.