As of this writing, I live with my wife. But before I lived with her, I had a variety living situations, including living alone and with a roommate. Anxiety and panic attacks occurring at home are fairly common for many of us with anxiety disorders and disorders don’t much care what your personal living situation is.

Panic and anxiety attacks in public present a special kind of frustration because, in addition to the attack, we have to deal with the embarrassment of being sick in public. Even during my worst panic attack in a public forum, I was still concerned with what others thought of me and whether or not they were judging me.

Given the tag-a-long of paranoia and altered thinking anxiety often brings, it is safe to say I always think people are judging me -- panic attack or otherwise. Having a panic attack just heightens my predisposed notions.

Roommates Have a Front Row Seat to Our Anxiety

When I am in public and my anxiety starts to rise to a level I can’t control, I do my best to go home. I like my home. It is comforting and, if nothing else, private.

When I stopped living alone, I quickly realized my roommate had a front row seat to my anxiety. I would try to hide it from him as best I could – not because of his judgment, but because of my own embarrassment.

If you live with someone long enough, however, you start to learn that person’s habits and secrets. My roommate quickly picked up on my habit of taking 30-minute showers and would run into the bathroom when he saw me heading that way with a towel.

When I Look Back at My Worst Panic Attacks

I can’t speak for all roommates, but my roommate was of great help to me during some of my worst panic attacks. When he and I lived together, I was going through a lot. I had recently started a new job, gotten a divorce, and started living on my own. I was under a great bit of stress.

One evening, during a particularly bad panic attack, he even helped me take off my sweat soaked robe and got me a towel to wipe the massive amounts of sweat off my neck, back, and arms. He got me a drink and some pretzels, too. 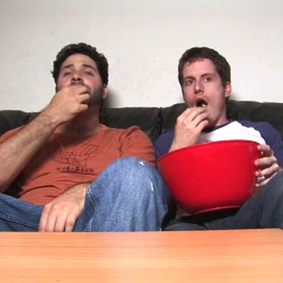 He also sat with me and told me it would be okay.

When I look back at my worst panic attacks, I see that I was often alone, left to suffer in silence, wondering if it would ever end. But, interspersed in there are good memories, of a sort, showing me just how much I am loved and cared for.

Nothing really says love like wiping the sweat off of your half naked roommate while he rambles on about how much stress he is under and how hard life is.

The moral of the story is: If you have roommates, don’t try to keep your anxiety problems secret from them – because they might just bring you pretzels.

Blow Anxiety Away on a Bubble
Anxiety and Personality Type
Bubba
December, 19 2018 at 2:45 pm

Thanks for sharing, but in my experience, roommates are irritated by my anxiety. When I've asked for help they acted angry. It's happened to me in a few different houses with a few different roommates.

Thank you for your sharing. I do have my fair share of anxiety and panic attacks experiences before in school as a kid during my first year.
It's never a pleasant feeling to have but that's how I feel when put in new surroundings with complete strangers.
That's why I see others experiencing the same thing, I will see whether I can do anything to help them.

Thank you Ann for reading and commenting! It is always good to reach out to others and I thank you for doing so! You are AWESOME! :)
~Gabe