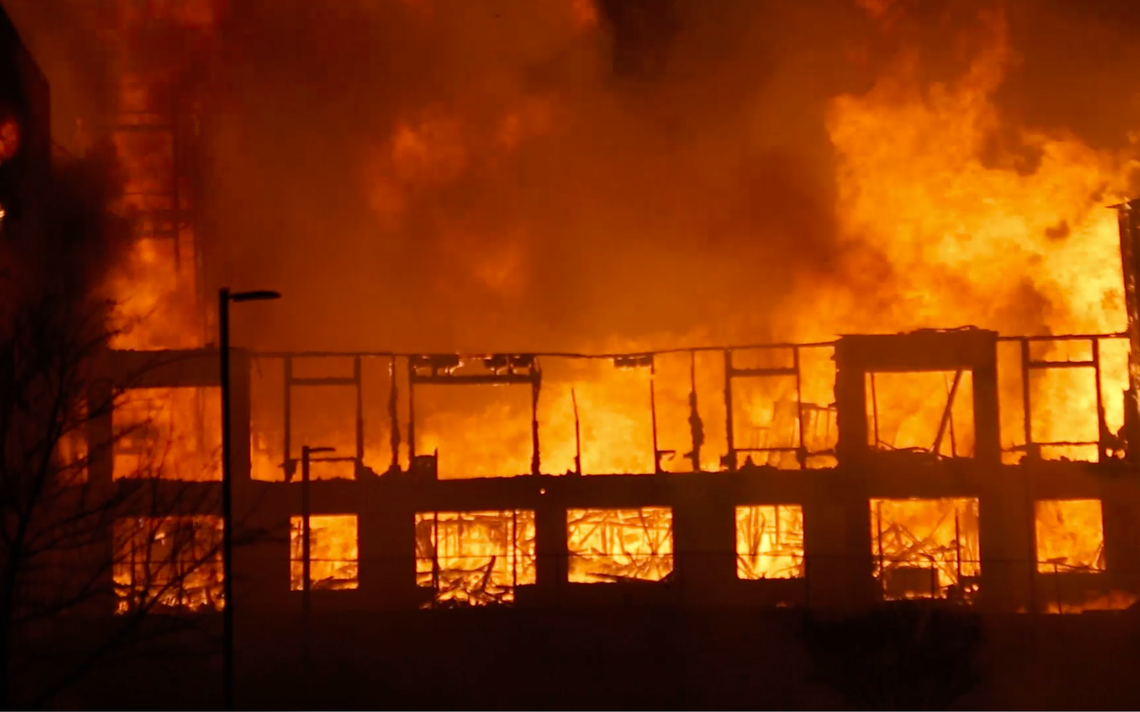 In a natural disaster, a fire or hurricane, you run and leave your bipolar medications behind. Now what? I faced that problem. Here's what happened.

A Life Threatening Fire. I Forgot My Bipolar Medications.

Across the street, the apartment building was on fire. In the chaos of the moment, I grabbed my cellphone and ran - leaving my bipolar medications behind. I forgot them.

It was ten o'clock at night on a Thursday when I opened my eyes after hearing a loud noise and saw that my room was bright red. My house was warm, and as I ran out to the living room, I saw the flames across the street soaring up and touching my windows. As I reached the window and felt its heat, I knew I had to leave my home immediately. Bolting from the house and now out on the street, I realized that the most important thing I forgot to grab was my bipolar medication. Too late. I would never return to my home again.

No Bipolar Medications. A Natural Disaster. A Train Wreck in the Making

I have been on a stable routine of medicines for bipolar disorder for the last five years. Every morning around the same time, I take my bipolar medication and have never missed a dose. The side effects of not taking this medication on a regular basis are severe.

Immediately, I called my doctor's office and the pharmacy, frantically trying to figure out how to get a week's supply of my bipolar medication. I had never been in this type of situation and had no idea what to do. My doctor was not in the office, and the pharmacy was jammed packed. Panic time!

Getting My Bipolar Medications After the Fire

I felt like if I was diabetic, it would have been easier to get insulin; but being that it was psychiatric medication, the urgency was not necessarily there. I realized that I had to get politely aggressive, as I like to call it. I did not cry or act frantic. I simply laid out the prescriptions, let them know how I was affected when I didn't have them and was willing to do whatever I needed to do to get the problem resolved.

Luckily for me, I have been compliant and a regular patient at my pharmacy for so long that they completely jumped on the situation once I came to them with a sense of urgency. They knew about the fire and cooperated with most everyone who was affected. However, I do know some people who struggled to get their medication.

In a Natural Disaster with No Bipolar Meds, What Would You Do?

With the recent events, such as Hurricanes Harvey and Irma (Disaster Mental Health After Hurricane Harvey), I've been pondering these two questions:

Those of us with bipolar disorder, or any mental health condition, should absolutely have knowledge of this information in case of a natural disaster. Although I cannot tell you what to do in a future disaster situation, I can inform you that it can happen to anyone at any time.

Little did I know when I went to bed that night that I would have to rush out of my home and within an hour it would be lost to flames, including the medication that has helped me survive over the last five years. Talk to your doctors, insurance company, and pharmacy and ask questions such as: What are the steps I should take if something like a hurricane, storm or any natural disaster caused me to leave without my medication?

It is different for everyone, but I would prepare earlier rather than later. If you have any information on this, please comment below, as I know many people right now are dealing with this problem.

The day after the fire, I was nauseous thinking that I may have to go a week or more without my bipolar medication. Please share your thoughts or advice below.

Sharing My Life with Bipolar Disorder on Social Media
The Future of Bipolar Treatment: What I Hope Will Change

Darby
Same here. Two months and I’m torn between being worried about him and not wanting to impose to say I m here to support however he chooses.
Bipolar Disorder and Ghosting: It's a Big Problem
Klm
Wish I could get back the strength to have your optimism, trying so hard now again.. but I feel so trapped and my ex won’t let me go. Had to keep some tether to me for this sick sense of power and control they seem to need
Bipolar Disorder and Ghosting: It's a Big Problem
Klm
Hey 🐵.. I’ve been through a lot since you left. I don’t want to be angry anymore or feel trapped by the pain of being used and discarded, then accused and setup. You did what you had to do for you, no matter how selfish and twisted. You can call it what you need to it doesn’t matter anymore Ill always know in my soul you are a Manipulive fraud of a person, and you need to be a victim over having any real moral or sense of human decency… I’m at a place where I can finally accept that.. I lost my 6 figure salary and everything I built for muscle because of you, no matter how you frame it you tortured me and called me the love of your life stringing me along for months ruining my mental health at an already diffficult time. It’s the deepest most damaging set of things a person has ever done in my life, I feel very kicked used and setup not just with how you left but that you would promise all those things to parts of me you claimed were hurt in you then twist it all so cruelly and out of blue.. you need fantasy to live fine KT have it. But I am ready after all this loss and a year and a half of the worse emotional torture I’ve felt, the greatess sense of worthlessness and depression, I have panic attacks now and crippling anxiety.. never ever once before but you can’t understand what it did to me.. waiting days then weeks and Ben months.. we spent every minute together then that?? Well I knew what buttons to push and how to coax what you needed out of me while I was suffering and needed you u made my life hell and my worst nightmares come true. So please you might not agree and that’s fine say whatever you need to for the rest of your life Katie.. you’re lying to yourself and for validation of your abuse And years kr manipulation.. I just want to be done done… for good..
I’m seeing new docs and trying things that are finally helping me get over this and start my new life but you won’t let me… I was done befor eh filed the first time.. that broke me when I was finally healing for all this time.. it was wrong. You were wrong to leave how you did and label me. I loved you and tucked u in with kids and would have worked on anything like you always promised we would. In all those deeply meaningful ways that were lies.. can you understand how twisted that all was from you! The queen kr mental health and u ruined mine with some sick joy and power and pride… I don’t deserve how you labeled me or left, how you tricked me and bent the situation to have me packing for you while u setup this victim story.. I should have stayed and Made you face me but you are just a coward ghosting user… you will never understand what you stole from me and how much damage you did.. it’s so sick because it’s all the ways you said you were abused! And you’d do them to me when I thought we were finally going to live again.. I look back now and realize a lot of what always went on behind my back hah while my back was turned. Things I cheered u in for even… it’s so disgusting.. you should pay for my doc bills god knows now.. from what I saw I didn’t want to look anymore I can’t believe I thought I knew you and loved you more deeply than anyone only to be your stepping stone and practice husband, your stepping stone for growth while you steal the strength I earned and needed to feel whole.

Please just stop now and drop your crap so I can move on with my life and you can done. I was done forever before u did that.. I can be done again but it has to stop. Do one decent human act towards me please? I need to move on. Let me.. stop trying to keep this sick thread to me, I was dealing with mental health issues too so am hoping things u claimed to be… what you did and how u treated me is wrong and sick.. I’ll never believe otherwise.. but I don’t believe you’re evil, just ill. Please just let me mourn my fam and move on with my life now. You stole so much just give me freedom that’s all I ask. Be a smidgen of the person u promised me you were.. I know she was pretend now but she was the love of my life.. just stop using me u broke me already what else do u want… oh I have an eating disorder, panic attacks suicidal depression.. you turned me into you when we met and said I was weak in all the ways u used to praise me for giving u strength and coming in your life.. you twisted it all whe. I was in the wowed place! I hate thinking about it and I don’t want to anymore.. stop the need to control my life and have power over me and let me go so we can both move on… please Katie.. take your sympathy twist it all forever I don’t care anymore.. just stop and I promise we’re done forever. U were my everything, I never could or would have done the things u accused me of and none of that was remotely right or fair .,, it never will be.. but u can be decent and stop torturing me now .. I will do the same just stop tho I was done a year ago until U had to get your victim story in and the pics
Thing.. it’s ridiculous you abused those laws and used me then emotionally tortured me to call me crazy and blame me… you know it’s true and most people do tbh you’re just fooling yourself rich girl with too much time and forever the victim.. let me go stop the bondage legal bs, u should be in jail for false accusations not pushing it more.. goodbye please .. let me mourn and rebuild my life
Bipolar Disorder and Ghosting: It's a Big Problem
TomC
Heart out to you it’s the worst after years of love of trust to find out they made you live a lie for their sock needs
Bipolar Disorder and Ghosting: It's a Big Problem
Mitch
Great advice. I agree. I needed your advice too. Thank you.
Bipolar Disorder and Ghosting: It's a Big Problem
advertisement