It’s sad that it took the deaths of twenty children one month ago to open up the conversation about gun control in the US. It’s even sadder, that as the days pass from this tragedy, the national consensus is once again heading toward minimal firearm restrictions.

The second amendment right to bear arms is getting in the way of a fundamental, universal right to attend math class without fear of getting shot in the face. It also diminishes the right to have your main teenage problem be lacking a date to the prom, and not the cold-blooded murder of all of your best friends in the cafeteria. 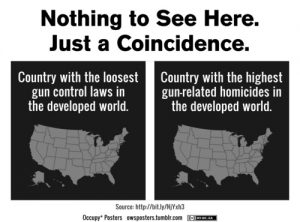 How Many More Need to Die?

How many more children, teachers and citizens need to lose their lives before we stand up and realize that unprecedented access to alcohol and drugs, little access to mental health care and easy access to high-powered assault rifles is a problem that needs to be addressed?

In order to properly address this issue, we need to consult our critical thinking capacities and our ability to think in logical terms.

And, it’s not going to be fun.

It’s going to go against everything you may have been taught to believe. But it’s something you have to do. Your second amendment is causing hundreds, if not thousands, of senseless and preventable deaths, every single year.

Think Back. A Few Hundred Years

Would you visit a doctor who only used medical information available prior to 1791? Would you ask your lawyer to only use legal precedents that were available only over 200 years ago? Then why are you standing up for a right that does not take into account 21st century problems such as major mental illness, addiction, bullying, cyber-bullying and lackadaisical laws that allow pretty much anyone access to a high-powered assault weapon?

Owning a gun should be an earned privilege. 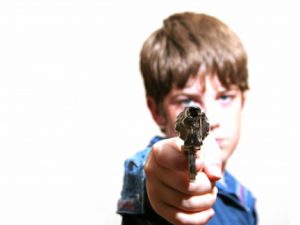 Why Isn't Access to Mental Health Care a Right?

What shouldn’t be an earned privilege?

If the US citizens are actually committed to seeing an end to school shootings, mental health care access needs to be at the top of your list of priorities. It is nearly impossible for someone to decide to take a backpack of guns into a high school and shoot up the place without having some emotional difficulties. Difficulties that could likely be addressed with the proper therapist.

I work with a highly volatile client base, many of whom have committed gun-related offenses, including multiple murder, murder. attempted murder, assault and assault with a weapon. As I work with these clients, I unanimously hear that if they had someone they could have talked to, things would have ended differently. If it was OK for them to seek help before doing what they did, lives could have been saved.

It’s not easy. It’s perhaps one of the most complex problems that exists in the Western world. But just because we can’t find a simple solution, it doesn’t mean that we shouldn’t do what we know works: limit access to guns and increase access to mental health care.

But, would you do it? No, you wouldn’t. Because it doesn’t make any sense.

Wake up and take a look what is going on around you. While you are at it, take a look at the obituary section of your local newspaper and all the innocent lives that could have been saved by rational gun control and free access to mental health care.

If accessing mental health care was as easy as accessing guns, we would immediately see a decrease in these tragedies, according to Electroboy author Andy Behrman.

Please. Just think about it.

What you are doing now, just isn't working.

APA Reference
Curry, C. (2013, January 13). The Right to Bear Arms vs. the Right to Mental Health Care, HealthyPlace. Retrieved on 2023, January 29 from https://www.healthyplace.com/blogs/survivingmentalhealthstigma/2013/01/the-right-to-bear-arms-vs-the-right-to-mental-health-care

Combat PTSD: Winning the Battles After the War
Cognitive Distortions and Self-Stigma
Kellie
March, 30 2016 at 7:30 am

If you go on a diet then you dont have cookies in the kitchen.
We dont freely allow guns in Australia.
Maybe its time to limit access to the cookies America?

I found this a interesting read, more on the point of awarness. As I feel that would be important beginning, giving a ****. Always a good start. Being a happy gun owner I found your article a little pointed. How ever having mental illness littlered through my family I have a hard time getting past a certain point, which isn't addressed here. According to stats. Over 95% of mental illness related crime with firearms is sucide related. Ohh the majority of all gun realted murders are with handguns. And the majority death row (these are American stats please if you have something that contradicts this and can be verified id be more then happy to view your data) inmates didn't have any mental illness. Some did of course, but the most were medically were common to a regular person.
Perhaps we should be looking to split the 2 concerns. The mentally unstable and the mentally ill. Both require attention but it would seem the mentally ill mainly hurt them selfs and or their family more then random strangers. Now that being said; even I have a hard time making an argument that someone who guns down children and teachers with an AR15 isn't both mentally ill and unstable. I'm not a doctor so I won't go into specifics on that, but I certainly give it some thought and have a hard time getting anywhere near a possible solution as I like to think many of the problems we suffer as human beings I think tend to have a lot more simpler solutions then we would inmagine.
Would I feel safer if a trained and annually certified veteran; either military or police was stationed at my nephews school everyday.. Perhaps helping out doing minor tasks hopefully never to be used but in emergency? YES. But I'd also agree the solution of feeding fire to fight fire isn't completely logical as you said before. The solution most likely falls in the middle of both arguments perhaps. I know this article is old but I'd appreciate your thoughts on this.

Your observation is smart one on the insoluble dilemma to bear vs. to access mental health care by principal principle of current psychiatric possibilities. By me as clinical psychiatrist, the ignorant attitude of community toward mental health service indicates crucial ditch on satisfying psychiatric treatment and management of mental disorders. The same confirms the present ardent debate in USA on the sinister right to bear arm. Let's put for discussion this issue from a deep psychological view of point: the main role of gun is to kill someone and not to protect oneself as think lawmakers with hedonistic tendencies. As such, the gun might be uses easily to kill anyone in critical psychosocial circumstances, by both:mentally health or mentally ill person. This cruel probabilities couldn't prevent any law. In this case I would to stress the latent desire for great profit of armament industry which support greediness governors. Thus, the citizens would be subdued of horrible slaughters on guiltless children by legal guns. What a pity!

Thank you for the comment Dr. Ferati. I especially like 'the main role of a gun is to kill someone and not to protect oneself.'

I agree that the lack of addressing mental health is a problem, but taking any form of firearm away from sane, law abiding citizens is outlandish, and will only add to the problem. The reason why school shootings is such an issue is because we create a "weapon-free" area at which anyone could look at and see, this is the place where I could get the most kills with the least resistance. If you make it harder for sane law abiding citizens to acquire weapons for defense, then you essentially just made everywhere as unprotected as schools are now. It is even more outlandish that some people believe that we could just hire more police to be on-duty at these schools. That is not economically viable. The easiest solution for all of this is to make what is the equivalent to volunteer firefighters for the police dept, in which everyday citizens who have had mental background checks and can carry firearms are allowed to go where police can go with firearms. This could work for many teachers. Then if there was a shooting, we wouldn't have to wait 9 minutes or longer for police to arrive because would have people there to at least attempt defend us. Also, just because you don't take advantage of a right doesn't mean that others wouldn't like to. The main purpose of the Second Amendment was to be able to protect ourselves from a tyrannical government. Many of the founding fathers can be directly quoted on this.

Hi Timothy,
Thank you for your comment. Although I don't agree with most of what you said, I appreciate your comment. I think arming 'everyday citizens' and putting them in schools is incredibly irresponsible. What's to stop a gang of student from rushing them and taking their gun? What's to stop them accidentally firing their gun since they are just 'everyday citizens?' Obviously, if a school was targeted, they would be shot first to eliminate the threat and then continue on throughout the school. As I stated, you can't fight guns with guns. The problem needs to be addressed at its root.

This is one of the best pieces I have read on this issue. (And I've read a ton.) Either response -- gun control or mental health care access -- by itself is inadequate. I also am glad you mentioned substance abuse, because the statistics show that while mental illness is not significantly associated with a higher rate of violent crime, substance abuse (and especially substance abuse combined with a mental illness) definitely is -- in a very big way. I'm going to share this article, and I hope it's widely distributed.

Thank you so much for the kind words Kathleen. I'm really glad you enjoyed the piece and will be spreading it around. It's one I've wanted to write for awhile. Your support is greatly appreciated.
Chris

Mental health care is highly important. Chicago, unwisely, chose to close several mental health clinics in order to save money. Saving lives is so much more important than saving money.
Many cities are also making cuts to their police, fire, and emergency medical services. I wonder if that might change if their were an emergency affecting them directly.
Getting back to mental health, though, public awareness and access to mental health facilities are of utmost importance. It not only saves the lives of others, saves the lives of those afflicted with mental illness, but also saves a life by offering the tools to have a better quality of life.