Anxiety, ADHD, or Both?

Humpty Dumpty sat on a wall. Humpty Dumpty . . . whoa, did you see that squirrel run across that wall, well, I guess it’s a fence, chasing . . . eggs . . . I need to go to the grocery store because we have no food because I keep forgetting to go and I’m tired of fast food . . . that squirrel was fast and he’s gone . . . I love fall . . . I keep forgetting to schedule my daughter’s senior pictures.

Wait. What was I doing? Oh yeah, reading this nursery rhyme.

Ugh! How am I going to be able to hold down a job if I can’t even read a stupid nursery rhyme? I guess I wouldn't have to remember going to the store then because I wouldn’t have any money. I’m so useless. How am I supposed to concentrate when there’s so much pressure in my head? Make it stop! What is wrong with me?

Difficulty concentrating, distractibility, racing thoughts, poor performance (on the job, in school, with daily tasks), irritability: these are indeed things that could make someone ask, even plead, “What is wrong with me?”

[Note: I hate to think in terms of “wrong” when it comes to people. When we think of difficulties as something fundamentally wrong with us, we can easily become quite down on ourselves. Instead, reframe the question so that “What’s wrong with me?” becomes “What is it that I’m experiencing that’s causing me these difficulties?”] 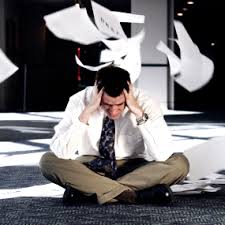 So what’s going on when our head spins and we feel frazzled, out-of-control and so frustrated and frightened that we’re unable to pay attention or concentrate? The answer isn't always an easy one to figure out, but these experiences can point to different things, such as anxiety or attention-deficit disorder/attention-deficit-hyperactivity disorder (ADD/ADHD).

Anxiety and ADD/ADHD are two different disorders. However, they have symptoms that overlap. Not only that, but they can occur together. According to the Anxiety and Depression Association of America, about half of all adults who live with ADHD are likely to have an anxiety disorder as well.

For the frustrated person above attempting to read a simple nursery rhyme, what was happening? Of course we don’t know nearly enough about this person to diagnose him/her, but we do know that things he or she was dealing with fit both anxiety and ADD/ADHD. The symptoms fit with both disorders. Chances are high that this person is also restless, hyperactive and has difficulty sleeping, for these can also be part of both anxiety and ADHD.

With ADHD, symptoms also include forgetfulness and disorganization.

Decreasing Symptoms of Both ADHD and Anxiety

Even when you know what’s happening, it’s difficult to calm a roiling mind and body. To rub salt in the metaphorical wound, with anxiety and ADHD, one can make the other worse. Anxiety can so preoccupy our thoughts that we become forgetful and maybe even disorganized. And ADHD can feel chaotic and unsettling, thus increasing anxiety.

But take heart -- no one is doomed to a lifetime of distracted agitation and runaway thoughts. Here are some tips.

Pay attention (no easy task with anxiety and ADHD, but it’s worth it):

Talk nicely to yourself:

Remember, too, that sometimes it’s good not to pay attention. I happened to miss the end of the Humpty Dumpty nursery rhyme at first, so I didn't learn that Humpty smashed irreparably. Therefore, I know that I can be put back together again. We all can.

Which Is Worse: Anxiety or Bipolar Disorder?
Anxiety and Talking with People
Bernie Stewart
May, 25 2016 at 5:28 pm

5 years ago a neurologist, psychologist, and psychiatrist gave me an official diagnosis of ADHD and General Anxiety Disorder. For 64 years I had struggled immensely to keep up w/ peers in school, college, and the military. Frankly, I always thought I was less intelligent and was very critical of myself. At 64 I found myself struggling more to compensate and hence began the process of seeking answers from health professionals. The best thing I have ever done. While I am not a candidate for stimulants, etc. 2 forms of therapy have helped me immensely: Cognitive Behavior Therapy, a book titled "Feeling Good" by Dr. Robert Burns and group therapy. Subsequently, the skills I have developed have helped me enjoy a better quality of life.

Hi Bernie,
Thank you so much for sharing your experiences. I think reading this little bit of your story plus specific things that work for you are going to be helpful to many readers. I'm familiar with CBT, Dr. Burns' work, and group therapy, and I am not at all surprised that you have found these things to be successful. You're a great example of how asking questions and pursuing answers is an empowering process.

Hi. Thank you for this informative blog. I have suffered from depression since childhood. I was officially diagnosed about 5 years ago by a Psychiatrist as having Dysthemia, or moderate depression. I also suffer from anxiety. I often wonder if I have underlying disorders such as OCD, ADD, etc. I guess the only way to know for sure is to have a Psychiatric evaluation? I take antidepressants and mood stabilizers. They help to a degree. However, I still find myself extremely moody, irritable, angry, sad, and lonely. I chew on my lip, my fingernails, my cuticles, I'm a binge eater, overweight...I obsess and ruminate over things, don't sleep well, have little to no motivation, get distracted easily, my mind wanders, and concentrating, and remembering things can be a real challenge! Holy moly, I'm a mess! Lol! Anyways, I've been thinking of checking in with a Psychiatrist again for an evaluation. Life is just getting to be too much to bare these days.

Hi Alyson!
I'm glad you found this article to be helpful, and I appreciate yo leaving a comment. I want to tell you that you're not a mess! (I've told myself -- and believed -- that I was a mess before, so I understand the frustration (and other things) that makes people say this. But really, you're not! You are going through some tough things, and your brain is messing with you, but that's different than being a mess. I think that you are wise in wanting to see a psychiatrist again. We change over time, and it's good to have a professional give a new evaluation. Then he/she can work with you to figure out a plan to feel better again. I wish you the best!