It was four weeks after my first child was born when I experienced my first intrusive thought. In fact, the thought itself – a vision of myself placing my hand over his mouth – wasn’t unusual, as disturbing as it was. My reaction, however, was. 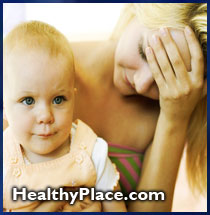 It is estimated that 80% of new moms have so-called scary thoughts like the one I’ve described. Most just dismiss them and carry on. In my case though, my severely sleep-deprived mind went into overdrive. I wondered who I had become and what I was capable of. It terrified me.

I became obsessed with my thoughts, which became more disturbing. Every graphic news story I’d ever heard would pop into my head. I was watching a series of movie scenes that I never wanted to see; yet I couldn’t turn them off. The thoughts came fast and furious, spurred on by my spiking anxiety.

Within a few days, I had visited an ER, my PCP and a specialist psychiatrist had a diagnosis –Postpartum Obsessive Compulsive Disorder (PPOCD), a condition that affects up to 3% of women. The obsessive part refers to the persistent, repetitive, wholly unwelcome thoughts and scary-as-hell images related to the baby. The compulsions are repeated actions that, for some reason, provide a sense of relief, albeit only momentarily. My compulsion was to tell my fortunately supportive husband my thoughts; the relief came when he reassured me that I wouldn’t act on them. And then the cycle continued.

Initially, even when I knew they were a symptom, the intrusive thoughts were crippling. So much so, that I seriously contemplated suicide for the first time. I would have done anything to protect my son, even if it meant ending my own life. The irony is that there is a 100% correlation between OCD and non-violence. OCD sufferers are often so concerned about hurting others, emotionally, physically or otherwise, they are unlikely to lash out in any way.

Within a couple of months, I was a lot better. The medications helped enormously, as did some CBT tactics. I learned to stay away from triggers – violent news stories and TV storylines that would send me spiraling, as well as judgmental people who "didn’t understand postpartum depression," let alone postpartum OCD.

Five years post-diagnosis, I can handle any news story without issue. The intrusive thoughts have pretty much disappeared and I enjoyed a normal postpartum period after the birth of my daughter. I’ve fully recovered, but I’m still ashamed to admit I suffered from the monster that is PPOCD. I tell my story for other women who are in this living hell. I want them to know that they are not their thoughts; that they can believe in themselves again.

Lisa D’Innocenzo is a Toronto-based writer and a mom of two. Her blog Crazy Busy Mommy shares her personal parenting experiences and tries to provide an honest portrayal of its ups and downs.
To be a guest author on the Your Mental Health Blog, go here.

APA Reference
Author, G. (2013, May 13). Confronting the Postpartum OCD Monster, HealthyPlace. Retrieved on 2021, May 9 from https://www.healthyplace.com/blogs/yourmentalhealth/2013/05/confronting-the-postpartum-ocd-monster

Binging (Bingeing) Behaviors: A Bridge to Nowhere
Helping Your ADHD Child with Homework
Stephanie
May, 10 2018 at 7:26 am

Thank you so much for this article ♡ I read it everytime I have my "moments" I tell myself it's just a phase. Are you off meds?

Hi I think I have postpartum ocd.. I've been secretly dealing with it since my son was 5months old.. he is now 10 months. In the beginning it was so difficult. I went to my OBGYN and told her I was having anxiety attacks. Because I was too afraid to fully explain my symptoms. . She gave me Zanex. She said my son was too old for me to be experiencing postpartum. . Just this month I've been feeling so depressed. Life feels to difficult to go on some days .. but I fight because I love my son and fiance. . I just went to see a dr. About depression and getting on medication. They can't see me for 2 weeks. And I'm really nervous about explaining my symptoms to them.. how should I go about talking to them.. so I can get proper care.. I just want to go back to being the great mother I use to be

Hi Rebecca,
Sorry for the delayed response. Yes, I did have another child and it went perfectly well. I started my medication the day of the birth; I didn't have PPOCD. However, I did develop health anxiety after going off my meds, which is another form of OCD. It was at this point that I realized my OCD was not actually post partum related, but something I'd always struggled with, albeit on a smaller scale before children. But yes, all went well with my daughter during post partum and I'm so glad I had her (with all my doctors' support)
Lisa

Lisa,
Thank you for the article. So you were able to have another child and not experience the post partum OCD?
Rebecca

I to have been dealing with postpartum ocd. It hit me when my son was 9 months. I thought I was losing my mind. I have never had any anxiety , ocd , depression in my life. I thought my brain was out of control. Everything I looked or touch I would find a way to send a horror movie in my head. I finally got help 6 months lather . I was put on a low does of meds. I'm a lot better then what I was . The thoughts are all slowly leaving. I believe it just takes a lot of time. You have to tell your self this is not me it's the ppdocd talking. As much as your brain what's you to think that you would act on your thoughts or just repeating the thought over and over . One day all of that will be in the past and you will be yourself again. It just takes time. I'm not there yet. I do have to say I'm 90% there . God bless all moms.

Hi Kathleen,
Thanks for your response. I am not sure about your self-harm question, but I was definitely thinking about violence against others when I said that. In fact, I could have easily harmed myself (suicide being the ultimate act) to protect my child. I wish you the best and encourage you to deal with it openly, as you say. Are you getting help for your situation?

Thank you, Ms. Innocenzo, for this article. It is definitely a little talked about syndrome. It perfectly describes what I always thought of as my post-partum depression, but I see was probably OCD or at least depression AND OCD.
I want to ask you about this sentence:
"The irony is that there is a 100% correlation between OCD and non-violence."
Does that include violence against oneself? My episodes of bipolar depression often include acts of self-harm that are part of an OCD cycle. You also say that OCD sufferers are usually very very afraid to hurt others in anyway -- which has always been the case for me and was part of my thinking when I self-harmed. But then that would become part of the motivation for suicide -- a mother who was self-harming (in secret) couldn't be a good mother and my kids would be better off without me.
The pain of this syndrome for the sufferer and the family, as well as the stigma and moral complexities, make this a very challenging thing to deal with. Like all mental illnesses, it is much better to deal with it openly.

There is so much wisdom in this article. People are afraid to discuss topics like this. But it is much more common than people believe. Good for you! - Sunrise Guided Visualizations