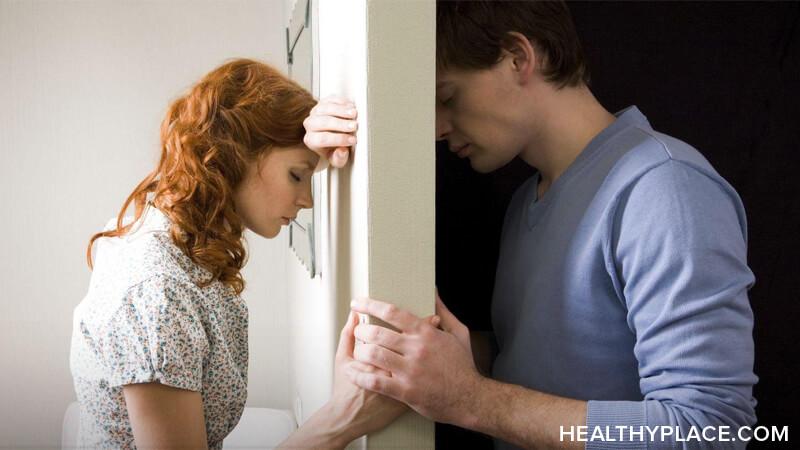 Many of us think we know what gaslighting means, but even so, gaslighting is hard to call out in a relationship because it happens so gradually you might not even notice. Don't be fooled by the displays of gaslighting we see in movies and on TV -- a gaslighter won't necessarily leave the oven on to make you think you're crazy. He or she won't always resort to blatant emotional manipulation tactics or call you a liar. Gaslighting can be a lot more pervasive, subtle and destructive than our basic understanding gives it credit for -- and it could be happening to you. Here's an illustration of what gaslighting means, why gaslighting is so hard to call out in a relationship, as well as the gaslighter types and traits to watch out for.

I read a wonderfully insightful book recently called Look What You Made Me Do by Helen Walmsley-Johnson. The book's byline is: "Not all abuse leaves a mark," so you can see why I might recommend it to my readers. In the autobiographical novel, the author details her two major relationships with controlling, abusive men, as well as toxic encounters with a verbally abusive employer.

There was so much about the book that moved me, but one part that struck me most profoundly was the author's portrayal of what gaslighting means. As a prelude to an honest account of manipulation and abuse, the book references the fable of the boiling frog. The fable claims that if you plunge a frog into boiling water, it will immediately jump out, scalded. However, if you put the frog into room temperature water and then slowly heat the water to boiling, the frog, unresisting, allows itself to be boiled to death. This is a powerful way of describing what happens to abuse victims.

Why Do Gaslighters Do It?

The term gaslighting comes from a 1938 play called Gas Light by the British dramatist Patrick Hamilton. In the famous play and subsequent movie, a husband attempts to drive his wife crazy by convincing her she's "imagining" that the gas light in the house is dimming, even though he is responsible (Ambient Abuse and Gaslighting).

We can glean from this that the gaslighter's intention is to overwrite our reality with his or her own, convincing us that we cannot trust our own memory or perceptions, and creating self-doubt. There are many different forms of gaslighting, however, and they don't all subscribe to this trope.

The book The Gaslight Effect refers to a type of gaslighting called "glamour gaslighting." This is where the gaslighter showers you with praise and special attention but never gives you what you actually need from the relationship. The gaslighter may even get angry at you when you need a shoulder to cry on or a moment to be vulnerable. It's easy to see how this behavior could be confusing and unsettling to the victim.

Another form of gaslighting occurs when the gaslighter paints him or herself as the victim: he is known as "the good guy" gaslighter. Whenever you indicate a problem to The Good Guy, you find yourself apologizing, convinced that you are the one in the wrong. He works to please and charm others, yet you always wind up feeling unheard and dissatisfied (How It Feels When Your Verbal Abuser Is a Nice Guy.)

This type of gaslighter uses your worst fears against you. A good example of this is how my ex-boyfriend used to make fun of my obsessive-compulsive disorder (OCD) while playing on my fears of losing my only parent. One time we were at the cinema, and I was filling up a bag of extortionately priced pick 'n' mix sweets. My boyfriend put his hand on my shoulder and said, "If you put any more sweets into that bag, your mother will die."

Now, I'm not sure if that was a covert way of controlling my weight, how much I spent or just a cruel joke, but it worked. And of course, he laughed it off as "banter" by resorting to his usual line -- "You're too sensitive."

Why Gaslighters Get Away with It

Perhaps, through my examples of what gaslighting means, you can see exactly how gaslighters get away with it -- by minimizing their behavior and disguising abuse as a joke. Even so, it's important to note that gaslighting doesn't always have to be deliberate. Gaslighters can enact the most subtle of manipulation tactics without having to accept that they're doing anything wrong. That's because, by legal and societal standards, they're not. While it might no longer be socially acceptable to hit someone to establish control, there's no law defining exactly how you should behave in a relationship (The Invisible Line Between Verbal and Physical Abuse).

At its most effective, gaslighting means undermining trust in your own judgment and it may leave a lasting imprint on your self-esteem. You might wake up in the night sobbing, trying to remember who you are and what makes you unique. Your friends might notice that you've changed, or that you've begun to act a lot like the person who's been gaslighting you (Domestic Abuse Victims Think They Are The Abuser). You might struggle to disentangle your own thoughts from your abuser's or be able to recognize your inherent morals and values. You may even forget entire conversations with your abuser. All of these are signs you're being gaslighted (After Emotional Abuse: Do the Side-Effects Ever Disappear?).

Next time, I'm going to look at specific examples of gaslighting behavior and how to respond.

Look What You Made Me Do: A Memoir, Helen Warmsley-Johnson, Macmillan, 2018.

APA Reference
Smith, E. (2018, March 20). What Gaslighting Means and Why It Is So Hard to Call Out, HealthyPlace. Retrieved on 2023, January 30 from https://www.healthyplace.com/blogs/verbalabuseinrelationships/2018/03/why-gaslighting-is-so-hard-to-call-out

How to Make a Comeback After Abuse
Gaslighting Abuse Examples and How to Respond
dana
February, 18 2021 at 1:31 pm

I don't think that the article you reference under "good guy gaslighter" is actually about the same type of person. Good Guy gaslighters are indirect, passive aggressive and may never get outwardly angry at all. They might act like they just can't understand what you're saying until you're convinced that the problem you wanted to discuss doesn't even exist or you think you're stupid for making a big deal out of it. Or they may agree with you but never again acknowledge that they did or you even had the conversation. They are nice and helpful to prove something about themselves or to get something, never as an act of kindness or compassion toward you.

Thank you. Based on what I’ve been able to “glean” from this article and the ideals described herein, I am still curious. When an individual is “called out” for “gaslighting” how does one know or realize that in itself may actually be a form of gaslighting? Are we getting too deeply philosophical? We are humans. Diversity abounds. There are as many different feelings and idiosyncrasies as there are people in this world. It’s a very tough target as it constantly changes or adapts, if you will...