Long-Term Abusive Relationships: The Routine vs The Cycle of Violence

The routine phase of the abusive relationship is like a game of cat-and-mouse that the cat and mouse don't realize they're playing. The subtle you do this then I do that movements of the couple are so instinctive that neither participant questions their actions or their reactions to their partner's behaviors. 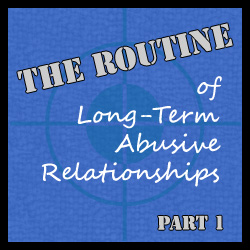 The routine creates an altered state of reality for the abuser and the victim. A healthy mind would ask, "Why is there so much conflict in this relationship?" or, "What decisions do I need to make to improve my situation?" The minds' of the abuser and victim ask, "Why does s/he cause so much drama and heartache?" or, "What is s/he going to do next?"

During the routine, both the abuser and the abused live in a fantasy world where their conscious minds, set on auto-pilot, no longer create healthy realities for themselves but instead attempt to make the other partner behave how they think the other should behave. Alas, there is little-to-no thought given to the abuse in the relationship because the behaviors are not defined as abusive in either partner's mind. Focusing outward on the partner instead of inward on one's own thoughts and feelings allows abuse to operate under the radar.

During the routine, the victim thinks of him or herself as being kind, caring, and protective of their partner. The uglier the partner acts, the more martyr-like the victim becomes. S/He thinks, "I will love my partner unconditionally and in time they will respond to my love by being kind, like me." The victim is not thinking about manipulating the abuser into kindness, but, in essence, that is what s/he attempts to do. The victim thinks of the abuser as a harmless, temperamental child. Unfortunately, the abuser is not harmless and no amount of pretending makes it true.

The abuser more or less thinks as s/he always has thought during ideal conditions (which is what the routine creates for the abuser). The abuser thinks that the victim is out to get him or her in one way or another. If the victim were to gain power over the abuser, then the abuser's façade of perfection or wounded heroism would crumble.

The victim is attempting to gain a certain degree of power over the abuser's behavior, but the victim's intentions are not as destructive as the abuser believes them to be.

Nevertheless, the abuser's thoughts spring from his or her confusion and fear, turning the abusive person into an unpredictable and dangerous time bomb of fury.

In the next article, we'll explore the feelings and behaviors during the routine.

APA Reference
Jo, K. (2014, October 6). Long-Term Abusive Relationships: The Routine vs The Cycle of Violence, HealthyPlace. Retrieved on 2022, May 25 from https://www.healthyplace.com/blogs/verbalabuseinrelationships/2014/10/the-routine-of-long-term-abusive-relationships-part-1

Beware: You Attract Abusive Predators When You Ignore Intuition
Long-Term Abusive Relationship Feelings and Behaviors
Caroline Abbott
October, 21 2014 at 3:51 am

I love how you outlined the patterns so clearly, this really puts things in perspective :)