Why?! Is The Wrong Question To Ask In Abusive Relationships

I asked myself "Why?" more than any other question during my marriage. I thought that finding the answer to "Why?!" would allow me to attack the root causes of the trouble between him and me. But, for so many reasons, why? was the wrong question to ask.

Why can be an empowering question in the correct setting. The "5 Whys" is a wonderful technique for getting to the bottom of almost any normal situation. But when using the whys to understand an abusive relationship, it causes trouble. Why? Let's find out... 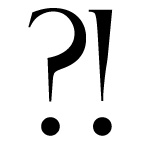 Why is "Why?" a dangerous question to ask when in an abusive situation?

Why is "Why?" a dangerous question to ask when in an abusive situation? Because he is wrapped up in his own version of reality, and to retain his own sanity, I must be what he says I am - nothing more, nothing less. Challenging his definition of me challenges his sanity.

First, I must back up from now into my relatively recent past, and consider how I once tried to solve the problems between us. There would be a fight. It would spill over into morning. He would say something nasty before stepping out the door to go to work. I would be left in angry tears, convinced there had been an injustice (he defined me unfairly) and determined to set it right by getting to the core issue. "Why?!" (with the exclamation mark) led me down the path to "self-discovery" and allowed me to examine myself. Only myself, without taking into consideration the fact that no matter what I discovered, it would not satisfy his need to stay sane, rational, in control of his world.

No matter what I said about my deficiencies or the solutions I came up with, he would feel challenged by my beliefs. "Why?!" - because I wasn't supposed to have any beliefs other than his. In fact, I don't think that he thought I should think at all when he wasn't around me. I think "I" disappeared (in his mind) as soon as he walked out that door. It's not that he didn't think of "who he thought I was" while he was at work; he most likely did mull over his definition of me. He thought about who he thought I was all day long. He defined me all day long.

So when he walked back in that door after work and "I" faced him with a true and thoughtful definition of myself, he felt challenged. When I challenged his definition of me, I challenged his sanity - the very foundation of each of our realities on this earth. We will fight to keep our sanity, and he is no different from me or you when it comes to that. He fought with anger and passion to put me "in my place" which was, of course, into the confines of who he thought I should be.

In one sense, asking "WHY?" was good for me, because now, after leaving the abuse, I have a solid foundation of knowing my faults and my strengths. But during the relationship, my every self-revelation was challenged as being psycho-babble, off mark, untrue. I re-examined each tidbit over and over again because I thought he should agree with me. I didn't realize that if he agreed with me, then he would have to shift his reality, and for someone who needs to control everyone and everything around him, he couldn't afford to change.

APA Reference
Jo, K. (2011, April 7). Why?! Is The Wrong Question To Ask In Abusive Relationships, HealthyPlace. Retrieved on 2021, April 12 from https://www.healthyplace.com/blogs/verbalabuseinrelationships/2011/04/why

Top 5 Lies That Bound Me to “Love”
Keeping The Kids Together Despite Domestic Violence
PrincessLuceval
April, 7 2011 at 5:11 am

Boy, Kellie, once again you are spot on.
*I didn’t realize that if he agreed with me, then he would have to shift his reality, and for someone who needs to control everyone and everything around him, he couldn’t afford to change.*
This is just so true. Thank you so much for your continued writing regarding this subject. "i am not his definition of me" is just so completely true that I'm still digesting that.