Anger is a completely normal response for a person put in a life-threatening situation, and, of course, in a combat zone, that’s exactly what you’re in. Anger is even a helpful response during these times as it focuses you and gives you the energy to fight for your life. Anger is part of your survival instincts.

However, if you have combat post-traumatic stress disorder (PTSD), when you get home from combat, you may find yourself unable to turn off that anger. You might find that you’re reacting to everyday events with the rage that’s appropriate for a combat zone – not a grocery store. The anger of combat PTSD can negatively impact your family, work and social life.

Aspects of Anger and Combat PTSD

Researchers have broken down post-traumatic anger into three key aspects that present themselves even when a person is not under direct, extreme threat: arousal, behavior, and thoughts and beliefs.

Arousal is the physical feelings of anger that a person experiences such as muscle tension, increased heart and circulation rate and brain arousal. Increased arousal may make a person feel on edge or irritable. If you suffer from combat-related PTSD, you may find yourself at a higher level of arousal on a regular basis and this may make you more easily angered.

Behavior changes that accompany combat PTSD tend to center around aggressive behavior. People may not be able to react to any threat (no matter how small) with anything other than aggression, even when that aggression is not reasonable. According to the National Center for PTSD, aggressive behaviors also include complaining, "backstabbing," being late or doing a poor job on purpose, self-blame or even self-injury. 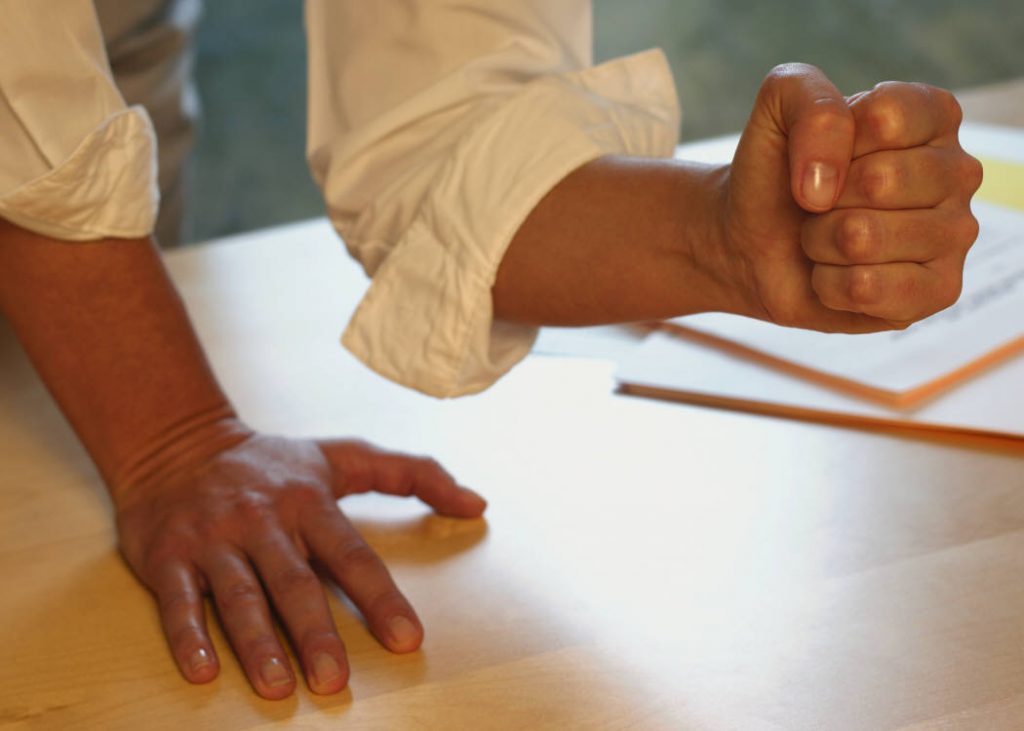 When suffering from combat PTSD, our thoughts and beliefs change, sometimes in ways we don’t even notice. The National Center for PTSD notes that some common thoughts in this case include:

These thoughts can lead to irritability and anger in many situations. For example, a person may feel an increased need to control their environment and have everyone “follow the rules” at all times because of their thoughts and beliefs. In battle, following the rules keeps people alive, when not in battle, this level of control and inflexibility can lead to hostile reactions. These hostile reactions work to reinforce the anger the person with combat-related PTSD is feeling and keeps the original, not necessarily reasonable, thoughts and beliefs going.

Getting Help for Anger and Combat PTSD

Because anger and combat PTSD is a common problem, therapies have been developed to address it. Different skills that are learned through cognitive behavioral therapy (CBT) work on each aspect of the issue. For arousal, people are taught relaxation techniques, self-hypnosis or how to use physical activity to release extra tension. More healthy behaviors are taught that can be used in response to life events. Thoughts and beliefs are examined and replaced by more positive ones.

What’s important to remember is that although anger and combat PTSD may go hand-in-hand initially, it doesn’t have to be that way forever. Anger can successfully be treated and controlled. For more information, please see the Anger and Trauma section of the National Center for PTSD website.

The Place of Medication and Psychotherapy in the Treatment of Combat PTSD
A Combat PTSD Mobile App that Really Helps
Dennis Sherman
January, 28 2014 at 9:29 pm

I came back from vietnam in 1971. Didn't know I had PTSD, but would almost explode if someone cut me off in traffic and other minor everyday stuff that most people would just brush off. I could usually control it or hide it unless something unexpected happened and then I was just roaring. Doing much better now after treatment.