It's estimated that one out of every four girls and one out of six boys are sexually abused before they reach the age of 18. Although it is hard to pin down accurate numbers because many instances of childhood sexual abuse are never reported. In fact, I never reported the abuse that I suffered, and neither did author, Laureen Peltier. We were both victims of sexual abuse and rape by a family member, which is far more common than sexual abuse by a stranger.

Many victims of childhood sexual abuse go on to have mental health issues in adulthood. Depression, substance abuse, eating disorders, sexual dysfunction, and, most commonly, PTSD, are just a few of the conditions that can occur as a result. These conditions can extend far into adulthood, cause symptoms that are disruptive to daily life, and require treatment to manage. 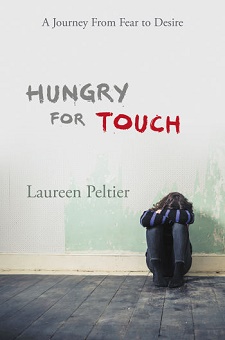 In her book, Peltier describes how the trauma she suffered as a child affects her as an adult when she seeks treatment after having a breakdown in her late 30s. Despite being a successful, career-oriented woman who seemed to have it all together, when her PTSD was triggered, she realized that her symptoms were at a point where they could no longer be ignored and she had to deal with what happened to her in order to heal (Trauma Events and How to Cope).

Peltier's treatment is chronicled in the book, with tales from her childhood and thoughts about her treatment at the beginning of each chapter. Her childhood trauma has caused her to not be able to stand being touched by men, and she longs for the physical intimacy that often accompanies relationships with the opposite sex. She finds a doctor who she trusts, and they begin on a journey of healing that uses both traditional and quite unconventional therapies.

Hungry for Touch is not an easy read; not due to the writing, which is excellent, but due to the content. I had to read it in small increments because I found it very emotional. I think that anyone who has been a victim of childhood sexual abuse themselves will find this to be the case. That said, I recommend this book because it gives an uncensored, first-hand account of what it is like to suffer sexual abuse--with all of the helplessness and horror--but also what it is like to heal, with the hope and inspiration that speaks to many of us.

I think it's especially inspiring to those of us who have felt the long-term effects of childhood sexual abuse. I know that when I was diagnosed with PTSD in my late 30s, I didn't think that something that happened so long ago could be causing my symptoms and issues. But it was, and I needed to deal with a 25-year-old trauma in order to find relief and healing.

One final thought about Hungry for Touch--when you read this book, keep in mind that it may trigger emotions or PTSD symptoms if you are a survivor of sexual abuse, so be sure to practice self-care, and only continue reading if you feel you can.

Recognize Progress in PTSD Recovery to Promote Further Healing
Fatigue and PTSD -- Why Am I So Tired?
ThankYou
October, 26 2016 at 11:14 pm

I've actually never heard of this book but from the information you shared it sounds like it could be very helpful to not only myself but other victims I know of as well. I will definitely have to check into it. Thank you so much for sharing!!

I understand. Exactly what I'm facing..it took me many years to understand i had panic attacks, depression, insomnia, etc...due to years of abuse as a child. When i finally told my mom at 17 (after i left home at 15)..she called me a liar. It took me that long to tell her bcuz my abuser threatened to kill my parents if i ever told. I hope to have the time and ability to read this book someday. Thank you for being open about it,it helps people like me who are still scared of judgement.

Help for ptss for sexual abuse as a child

Thank you for the information on the book. I am sure it will be very relatable and useful