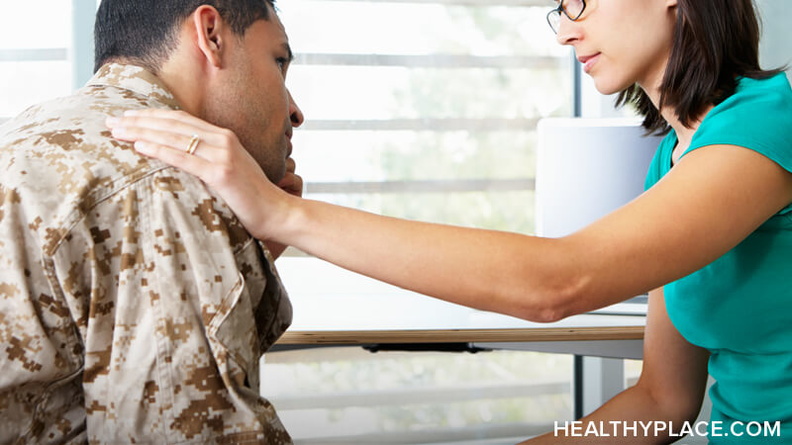 It takes a lot of courage to confront posttraumatic stress disorder (PTSD). When my PTSD symptoms flare up, I feel weak and unable to cope, but I keep going – by moving forward to make my life better. I exhibit courage when confronting PTSD -- more than I could acknowledge for many years.

It Takes Courage To Confront PTSD

When I began the journey of dealing with my issues, I ran across a description of the symptoms of PTSD in a book at the library. I realized I exhibited most of the traits described – I would dissociate, I had a sleep disorder, and I experienced hypervigilance, anger issues, substance abuse problems, and flashbacks.

I had a feeling in my early 20s that something was really wrong in my world. At that point I hadn’t figured out what was causing the problems I was having. Later, I started to get back memories of violence and physical abuse when I was a child, that caused my PTSD symptoms. Confronting those painful memories and my PTSD took a lot of courage. 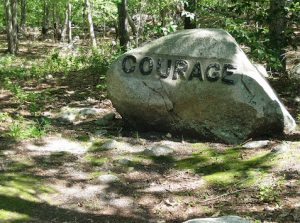 For years, I felt like I was a weakling, because I kept struggling with so many issues in life. One time I was talking to a friend I had known since high school, and he said “Dan, pound for pound, you’ve always been the strongest of our group.”

While he was talking about physical strength, I finally admitted that the same could be said of me emotionally (Debunking the Myth of Mental Weakness in PTSD Sufferers).

How did I keep moving forward and being able to work and take care of the things I needed to do in my life? I’m not quite sure, but through a successful 30 year business career, I kept doing what was expected of me on the job, and maintained my social responsibilities.

Honoring the Courage of My PTSD Healing Journey

One friend said that she used to get mad at me when I was dealing with the causes of my PTSD – which began when I was growing up with physical abuse in an alcoholic household. She thought I was holding on to the past and not moving forward.

Many years later she wrote to me in a letter that she had finally realized I was so far ahead of the others in our group that she couldn’t understand what I was doing. She honored the courage it took for me to continue healing journey and confront my PTSD. It took a while, but I could eventually own that courage for myself.

As I look back, I realize that when I began trying to dig out of the hole caused by my PTSD, I had essentially given up hope (Mental Health Recovery And Hope). I thought I was terminally broken, and would never feel any happiness in my world. Over the years I’ve kept working at my recovery, and now I’m addressing really old, deep and core issues that led to my symptoms of PTSD.

Today I can honor that confronting my PTSD is a courageous – and sometimes lonely – road to travel. But at this point, the rewards are far beyond anything I could have expected. I have a life that I am very satisfied with. Though I still feel like there is a lot of room for further growth, today - I am content.

Dan is a PTSD survivor, and author of Healing The Writer: A Personal Account of Overcoming PTSD and Freedom’s Just Another Word. You can connect with Dan on Twitter, Facebook, Google+, and at his website DanLHays.com.

PTSD Recovery: How to Cope With Triggers
PTSD Recovery: Accepting Your PTSD Diagnosis
Valerie Withers
October, 30 2018 at 3:23 pm
I have had ptsd for ten years.I choose not to go to a therapist anymore.II just take natural vitamins.Only two meds and avoid triggers at all costs.I am constantly bombarded with thoughts feelings sights sounds.I stutter now and shake like a leaf.My husband works a lot.But I have a roof over my head.The news,all addicts criminals and alcoholics have to go.It is very hard for me to focus on one thing at a time.When around people I talk too much.I read scripture a lot.I try to go to church meetings and pick slower.If theperson cannot wait,then I say that is a little to fast for me.I have forgiven my past abusers,but am always on guard for the next one.It is a disease of the central nervous system.I cant enjoy everyday life.Just driving to get groceries is hard.I hear negativity everywhere.I set small goals,not big ones.I am judged for being weak.This society hates weakness of any kind.I take up for myself,and do not fit into recovery,because I am not an addict or drunk.I have no criminal record at all.I am so tired of the constant shaking and nightmares.I hide at home.I jump everytime the phone rings.Everyone I have ever known has been rebellious.I am an old fashioned gal.I have severe memory problems,and am tired of hearing I am a sinner.I am a new creature in Christ,old thyings are passed away,behold all things become new.I have been called everything but a child of GOD.I only hang out with my church friends and if I even hear a story of another addict I am going to scream.
Traci Powell
November, 2 2018 at 11:00 am
Hi Valerie,

I can so relate to what you wrote, and you hit the nail on the head — this is a disease of the central nervous system. Because of that, it’s so important to learn methods to calm your nervous system. That has been instrumental for me and I’ve found the more I practice, the less my periods of severe anxiety happen and I’m not as over-reactive as I used to be. Please know there are sources to help you recover, even if you are not addicted to drugs or alcohol (something I also have not dealt with). The book Complex PTSD from Surviving to Thriving by Pete Walker is so helpful for guiding you through dealing with your symptoms. It has really changed the way I approach my PTSD.

Also, I understand your feeling about addiction as related to PTSD. It’s hard for people to understand that sometimes not being an addict makes it harder to recover. People expect survivors of abuse to be an outward mess. I have found it hard sometimes, because when you don’t look the part it can feel like you don’t have a right to say you need help. I understand choosing not to go to therapy, but have you seen a trauma-informed therapist who can do Eye Movement Desensitization and Reprocessing (EMDR)? Regardless of how you cope, you have a right to seek the help you need. EMDR has helped calm my nerves tremendously.
John
December, 11 2015 at 2:13 am
GEM
I went thru a similar situation. Just remember you need to get the real You back. Forget those jerks. I have struggled but am slowly getting back. I'll pray for you tonite. Hope you recover and do well. You are worth it. Keep going.
John
December, 8 2015 at 8:12 pm
Hope you continue your recovery and can be a Becon of Light to others with the same disorder. Good luck on everything.
Dan Hays
December, 8 2015 at 8:18 pm
Thanks John! I appreciate your honoring my journey, and yes, the recovery will continue.
GEM
December, 9 2015 at 12:54 pm
John,

I have PTSD from being bullied at work for 3 years and then filing with the EEOC, which I gave up on - too long. It was a horrible experience. I could not eat properly, lost weight. It took a huge toll on me. I am on medication. I am extremely anxious and always have a feeling of injustice. I know I am supposed to forgive those who hurt me. I try, but it is difficult. I pray to God to forgive them for me. I just wish this would go away. I have difficulty with my daily life - good days/bad days. Before the holidays, I am becoming overwhelmed and more depressed. I feel very sad each day. People don't realize what PTSD does to a person. It can take a long time to get better. This has been since 2009. My supervisor at my job of 23 years bullied me immensely for 3 years. Others who were bullied quit. I was determined to hang on. I was finally fired because they didn't know what to do. Then, they fought me about unemployment (which I never received in my life). They want you to quit, so as to not pay unemployment. Work bullying is done to save money. There are over 50 people I have run into that were bullied out of their jobs where I worked, so I am guessing there are many more. Bullying is not against the law. It is the cruelest way to get employees to quit. I am so upset mostly about the injustice and nothing I can do. I tried so many things to try to help pass the Healthy Workplace Bill in our State. I know there are many forms of PTSD and this isn't a fun one. I never imagined I would feel so awful. I see a psychiatrist and counselor. I try so hard to do things, but feel like my feet are in cement. I have no fun. I was an excellent worker and enjoyed my job. I cannot work now. I had to apply for disability. I do not think many people understand PTSD and don't understand what it does to a person. I have tried so many things to try to get over this. I don't know what else to do.
Dan Hays
December, 9 2015 at 1:54 pm
I am so sorry you've gone through all of that. I do understand how tough it can be to just get by on a daily basis.
GEM
December, 11 2015 at 1:54 am
Thanks for understanding, Dan.
GEM
December, 11 2015 at 1:55 am
Thanks Dan for understanding.