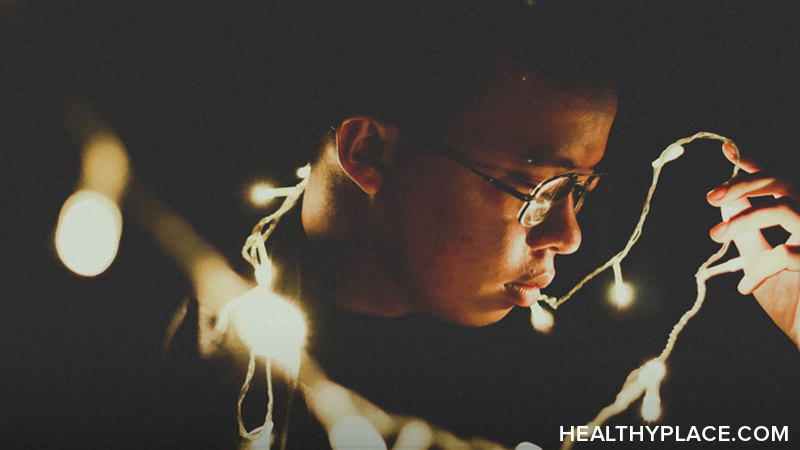 What Does It Mean to Say 'Mental Health Struggles Don't Take a Holiday?'

This is actually a fairly common point of discussion during the holiday season, but what does it actually mean when we say mental health struggles don't take a holiday? It means that despite the cheer, the colorful lights, and feel-good movies, a person may still not feel "merry and bright."

My mental health struggles, including depression and anxiety, are with me throughout the year, but around the holiday season, they really kick it into high gear. There are a number of personal reasons that exacerbate the situation, but it's also the sheer onslaught of the festive season that can cause anxiety to stir and the shroud of depression to approach. The overstimulation of the senses and push of positivity are triggering for me.

Pretty much from Halloween onward, I feel the dread of the holidays. That's right: the dread. By Halloween, Canadian Thanksgiving is already over, so the only thing standing in the way of Christmas is Remembrance Day, which doesn't quite have the strength to hold back the sale of garlands, ornaments, and trees. One year, I even heard a Christmas song on the radio the day after Halloween.

The problem that arises this time of the year is people tend to think: this is a season of cheer and happiness, so how could anyone struggle with negative feelings? When you're not magically cured by the festive season, then you run the risk of being labeled a Grinch. (If you think about it, even then, the Grinch's surliness was brought to the heel by love and positivity.) Mental health stigma pushes the idea that if we have more positive thoughts, then our mental health struggles will subside. This is toxic positivity and completely ignores the fact that people can be happy and still struggle with mental health.

Toxic Positivity During the Holiday Season

Toxic positivity during the holiday season can become a real detriment to those who are struggling when mental health issues. In this video, I discuss how that comes into play and why we should be mindful of it.

As I mentioned at the end of the above video, we should be mindful of toxic positivity during the holidays. Again, maybe it's a bit clearer this year for people negatively impacted by the pandemic. My hope overall is that this has helped bring to light that mental health struggles don't take a holiday just because the season calls for nothing but cheer.