I Tell My Story of Mental Illness with Tattoos 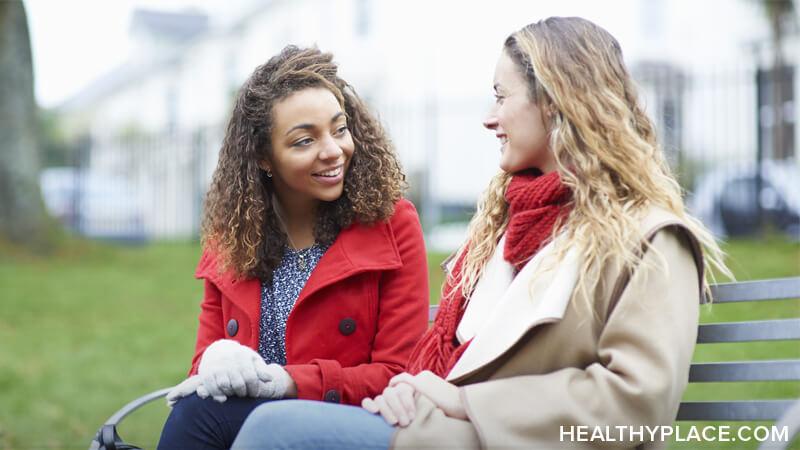 I tell my mental illness story with tattoos because they both tell stories and help us tell our stories. Those stories can be about anything, and countless people have gotten their skin permanently marked with representations of their journeys with mental illness, myself included. My tattoos give me the opportunity to share my mental illness story and talk about mental health in general. Most conversations are positive, but as with most things mental illness-related, stigma is never too far off.

By their nature, tattoos are a conversation piece and invite questions about my mental illness story. If you have even one, I say it's inevitable that at some point someone is going to ask about it. Even if the tattoo isn't visible, it's not uncommon these days to ask people if they have any tattoos. In my case, my tattoos are visible. Or when people ask if I have any, I get to say "Yes!" and can share the stories of why I got them.

Two of my tattoos originated in my experiences with and relationship to mental illness. The first is the word Love, which I got because of the impact the organization To Write Love On Her Arms has had on my life. The second is a song lyric – "don't let hope become a memory" – from a song by the band Disturbed. It has gotten me through many a dark moment and because of that, I decided I wanted a permanent reminder of that encouragement.

I love the positive conversations that can come out of the ink on my skin and how those conversations and my mental illness story can help others feel more comfortable in their own situations.

More recently, I had a conversation that didn't start out quite as positively. After sharing why I had gotten those two tattoos I mentioned, the person I was speaking with asked me how many people my tattoos had cured. I'm not certain the person was being intentionally stigmatizing, but there's a certain edge of stigma to that question. Even if it was meant some other way, why even say something like that at all? Someone wouldn't ask a person with a memorial tattoo if it had brought that person or pet back to life.

I believe it's not about stigma existing so much as what we do with it ("What If Mental Illness Stigma Never Goes Away?"). When that person asked me how many people my tattoos had cured, I took it as an opportunity to explain that mental illnesses don't have cures. I told him that my tattoos were for me and about having conversations. It allowed me the opportunity to change his perspective; whether it did or not, I'm uncertain, but I do hope he has thought about what I've said since.

I'm not sharing this story about my tattoos, which could very well be a one-off, to scare people out of getting mental health tattoos or being honest about them when asked. Rather, it's to show that even a stigmatizing moment can be a teachable one. Sure, stigma sucks, but we can spin it into something positive. Let's take these opportunities to chip away at stigma's existence.

How do your tattoos tell your mental illness story?

APA Reference
Barton, L. (2018, September 28). I Tell My Story of Mental Illness with Tattoos, HealthyPlace. Retrieved on 2021, May 14 from https://www.healthyplace.com/blogs/survivingmentalhealthstigma/2018/9/i-tell-my-story-of-mental-illness-with-tattoos