Skin-Picking, or Excoriation Disorder, Is Not Just a Habit

Excoriation disorder is more than just a habit and words around it can stigmatize. Body-focused repetitive behaviors like excoriation (also called dermatillomania and skin-picking disorder) are more than bad habits one can break. The disease is difficult enough to deal with without the misunderstandings and stigma. Very few people know about this group of obsessive-compulsive related disorders (OCD) despite increased awareness efforts from within the body-focused repetitive behaviors (BFRB) community and even outside sources. It's important to remember that words can be stigmatizing and that excoriation is more than just a habit.

With so many misconceptions about living with a mental illness running amok and the beginnings of awareness efforts, it’s even more important to make sure that we’re sharing the right information. That’s also difficult since so much about skin-picking and BFRBs are unknown – such as potential genetic links or even what medications actually help OCD – and it makes sense to have those kinds of speculatory conversations. However, there is one thing that is known for sure.

Excoriation Disorder Is Not a Bad Habit 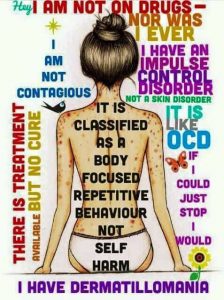 I’m protective of the BFRB community because of scam artists that like to throw the word “cure” around to desperate people, and people who pick their skin like I do, who pull their hair or bite their nails are some of the most desperate people I know. So when it comes to people using the wrong, stigmatizing language while trying to feed us some idea or sell us a product, I go on the alert.

I get it. People who aren’t well-versed in BFRBs might be quick to think about, and refer to, them as habits. Those are probably the same people that would be quick to use the “just stop” rhetoric or other oversimplifications of not-so-simple mental health disorders. What bothers me is when people who are skin-pickers or have other BFRBs use the word habit.

Maybe it’s a matter of them having been told it’s a habit and they’ve come to believe it. Maybe it’s a matter of newness to the issue. I’m not certain. What I do know is that when someone who is supposed to be spreading awareness or providing help uses the word habit to describe BFRBs, it’s a red flag for me.

Why BFRBs Including Excoriation Disorder Seem Like a Habit

Looking up the definition of habit would make it seem like a BFRB would fit in perfectly.

Habit is defined as: “A settled or regular tendency or practice, especially one that is hard to give up,” by Google.

My skin picking is definitely a settled and regular practice and it’s hard to give up. Case closed, right?

There’s arguments about the nature versus nurture aspect of BFRBs, but one thing I feel like is certain is whether or not it’s learned or ingrained in us from birth, our brains react to BFRBs beyond simple habit. It’s not something that gets broken after 21 days or 30 days or whatever rule you pick. The fact that there is enough impairment and effect on our lives that BFRBs can be classed as obsessive-compulsive-related disorders shows they’re not simple.

The Word Habit Creates Stigma for Excoriation Disorder and Other BFRBs

People who don’t understand BFRBs use the word habit because they don’t realize the depth of the issue. So when they hear others, especially those that have BFRBs, use the term, it affirms their misinformed beliefs. It creates a stigma that people like me just lack willpower or that we complain too much about little things or that we’re just attention-seekers. What people don’t understand is when we speak about our disorders it’s not done so lightly.

If you have a BFRB and use the word habit to describe it, please stop and understand it’s so much more than that. If you use habit because you’re afraid of the stigma of the word disorder, try not to be afraid because it’s just a descriptive word that helps give weight to BFRB severity.

Tags: excoriation disorder is not a habit

APA Reference
Barton, L. (2016, July 7). Skin-Picking, or Excoriation Disorder, Is Not Just a Habit, HealthyPlace. Retrieved on 2020, December 3 from https://www.healthyplace.com/blogs/survivingmentalhealthstigma/2016/07/stigmatizing-words-excoriation-is-more-than-a-habit

Happiness and Depression: It's Possible to Feel Both
About Leif Gregersen, Author of ‘Surviving Mental Health Stigma’
HJ
August, 31 2018 at 9:21 am

I used to do this. Less (extremely rarely) now. But I've always thought it was genetic. Never really looked into it, but thinking back it's a wonder I didn't lose body parts to some awful infection, as a kid.

Hi HJ. I'm glad to hear that the picking has lessened for you and that you made it through the infections. Infections are definitely a scary part of this disorder. I personally think it's genetic to some degree as well. Hopefully more research will shed light on that so we can get a definitive answer! Thanks for taking the time to read and comment. :)

I really found your article helpful, I’m 33 and have been picking the skin on my fingers since I can even remember I had never thought it was an issue until this past couple of weeks where it has been the worst I have ever had so I decided to google it and now realise I need to get help and try to manage it. It’s so embarrassing as I have the urge to do it on public transport and I get anxious thinking people are watching me which makes me want to do it more, and there is some weirdly odd enjoyment in doing it. My fingers are so sore and it’s now affecting my work but I can’t stop picking them.

Donna, I'm sorry for the late reply, but I'm glad to hear you've learned you're not alone. Skin picking disorder can be quite the challenge to overcome, but there are help and resources out there. I hope you have been able or are able to find some for you. Wishing you the best!

Thank you so much for this article! It was only 2 months ago I googled skin picking. It was then that I realized it was actually a disorder. Your article made me feel like I wasn't alone, and that someone actually GETS it. Thank you!!!

Hi Marie. I'm very glad to hear that you've learned you're not alone! I definitely get it, and there's a whole community of people out there who get it as well! Thank you so much for your kind message and I wish you all the best. :)