What To Do If Corporations Promote Mental Health Stigma 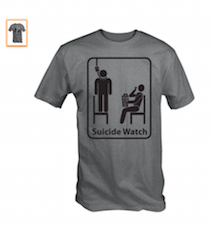 I learned today that Amazon is allowing the sale of shirts that poke fun at and perpetuate the stigma of mental illnesses, in particular, suicide. A third party seller called T-Shirt Village has posted and is selling t-shirts which read “Suicide Watch” while depicting a figure on a chair about to hang himself while another figure sits watching with popcorn.

While I’d like to think it’s a political commentary on the fact the mental illnesses and suicide are not taken seriously, I have a feeling it isn’t and that the vast majority of people won’t see it that way.

So what do we do in the wake of this kind of mental health stigma from a big corporate entity? (Yes, Amazon is a third party seller, but by allowing the posting and sales of these shirts, Amazon seems to be condoning, or at least excusing or ignoring, the hurtful message.) What can we do when corporations promote mental health stigma?

APA Reference
Barton, L. (2016, January 7). What To Do If Corporations Promote Mental Health Stigma, HealthyPlace. Retrieved on 2022, August 9 from https://www.healthyplace.com/blogs/survivingmentalhealthstigma/2016/01/when-corporations-propagate-mental-health-stigma

Modern life against positive things is overloaded with many negative and anti-humane activities, which ones are reflected on ruinous way to mental welfare particularly, and in destructive effect on global welbeing, as well. Your observation is conform with above mention statement, because trade corporation didn't choose manners to selling their products, as much as possible. It is the time of marketing and any undertaking is fit for use to achieve manifold profit. Amid them a lot of anti-psychiatric and scornful propaganda are exploited. The capital is going to become very dangerous. These phenomena in daily marketing industry have got damaging impact on prevention, treatment and rehabilitation of psychiatric patient, even comprehensive mental health care system, around all the world. Anti-stigma campaign should be more efficient and it ought to combat any marketing activities with stigma connotation. Otherwise, we shall make hard psychiatric treatment of people with mental disorders with many bad repercussions on social welfare.

Some people have a sickness about what they think is funny. Best thing I think is to ignore it and carry on.