The variations of mental health stigma

Although I speak pretty openly online and even in person about dermatillomania, I have a hell of a lot of trouble asking for help when it comes to the other two, especially depression. 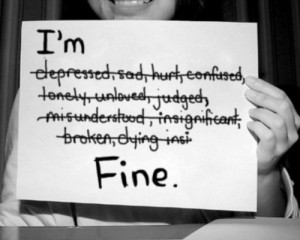 There have been so many times I’ve been asked “How are you doing?” and my immediate response is always “Good” or “Fine” or some variation. The words fall out of my mouth before the rest of me can even catch up. The problem is what I should really be saying is “I’m struggling” or “I’m not doing well today.”

I can chalk up the stigma that comes with my skin picking to sheer ignorance. Most people have never heard of the disorder and don’t know what it is. While that’s still not okay, it’s more excusable on some level. With something like depression, there has been a lot of, at the very least, basic information about it out in the public and media for years, yet people still don’t get it.

The stigma of depression

From what I can tell, people still look at depression as if it is a choice (Stop Minimizing Mental Illness). Someone should just choose to be happy and depression will magically disappear. What they don’t realize is even of the happiest people can feel depression, and moreover that depression isn’t always sadness. Sometimes it’s lackluster. Sometimes it’s the struggle to just do anything. Sometimes it’s being completely numb, despite any other emotion present. It manifests differently for everyone.

People still don’t see depression for what it is, even with all the information known. While it’s still a form of ignorance, it’s ignorance in the wake of information.

So even if I say I’m struggling, I still might be met with people telling me to cheer up, try harder, or that I have nothing to be upset about. People are fond of reminding us that someone else has it worse, after all.

Yes, someone else probably does have it worse, but that doesn’t take away from my pain and it doesn’t do anything to help my situation. By this logic, as some other brilliant mind has pointed out (I unfortunately don’t know who), people who are happy shouldn’t be unhappy because someone obviously has it better.

Sounds ridiculous, right? That’s because it is.

laura you got the words down exactly

I have ADD, and I been working alone mastering it for 5 years. The mind is the most interesting Frontier in the world. I use to suffer with depression, now I love life. As you "Crack" the secrets of the mind, it gives you 'Power" and "Control" you never had before. It's the most wonderful experience in the world. It's like a "Heavy Weight" lifted off of you.
Then Once you realize "How the mind Works" the possibilities are endless.
You are being "Dominated" by your own subconscious. I am not going to give away any Secrets here, cause i am working on a book. I will say this much. FDR said men are not prisoners of fate, but Prisoners of their own mind. That means, """You""" have imprisoned yourself .
And you did not do that "Knowingly" at all. Those walls were build by your parents for the most part.
You just feel "Powerless". Anyone would be depressed, not unless your Andy in the Shawshank redemption. Andy's " Thoughts " which is a way of thinking, was so sound, even real Prison wall did not stop him. We get stopped by " The walls in our own mind" because the way we think, is like 6 inch walls of steel.
Having this " Problem " is not a bad thing. Once you turn it around, your will "Fly" like a butterfly for the first time, and it will be "Pure Joy and Power" .

I recently wrote this from the heart... Some people may be able to relate
Today I have lied; not just a little, but a lot. So many, I've actually lost count. "I'm fine", "I'm ok", "I'm doing great" are just a few...
Why I'm admitting this, I do not know? Somehow Facebook has become my coping mechanism. It's like admitting to the world that I'm not ok in the safety of home, hidden in cyberspace where nothing is really real. Or is it? Do my problems now become everyone's problem and that is a little weight off my shoulder? Or is it because I can't bring myself to say what I feel vocally because then it is actually 'real'?
I smile (a genuine one for the first time today) at the irony of this. Known as a person who likes to talk, I find it hard to say how I feel. Words do fail me. I can see some of you smile at this....
I know tomorrow I may actually be 'fine'; I may even smile! I hope so. Until then, I'll leave you with a thought... the biggest lie that most people say is "I'm ok". Only that person will know it's a lie. If you look into their eyes you will also know.
Today I was lucky enough to have people around me who saw this. I can't thank them enough

This is great, and I really think you've struck the nail on the head with vocalizing it making it reality. It's like if we keep it inside, we can deny it on some level, but the second we say it out loud, we have to face it head on. Kudos for writing and sharing this. :)