The Military and Mental Health Stigma

On Oct. 28, 2013, Justin Eldridge took his life. He left behind a wife and four children, and the never-ending question of "Why?"

He had served more than eight years serving in the United States Marines, including an eight-month stint in Afghanistan.

The True Cost of Freedom 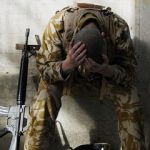 On Veterans Day, we pause to remember and thank veterans for their service to our country. There are gatherings and speeches and a moment of silence at 11:11 a.m.

From 2001 to 2009, I was the military reporter for a small, Midwest newspaper. I stood in the icy cold of January, watching as the National Guard unit readied themselves to leave behind family and loved ones. I followed them to their deployment base in Wisconsin, writing about the tears and heartache both the military members and their family were experiencing as they steeled themselves to be separated for at least a year.

For one family, the separation turned out to be a lifetime. A soldier named Richard Goward was killed when his vehicle slammed into another during a Middle East sandstorm.

Soon other units were deployed and more deaths followed. But death wasn't the only cost of this 10-year war. Families became separated by divorce, the toll of separation and changes were too much.

Then the injured soldiers came home. They had scars, not all of them visible.

In World War I, doctors began to recognize an illness unique to returning soldiers — shell shock. Black and white photos from the time show men with glazed, haunted eyes. Many of them suffered from amnesia, headaches, dizziness, tremors, and hypersensitivity to noise. They often were depressed and could not function as they had before the war.

I've seen the glazed eyes of a man suffering from shell shock, although it is now called post-traumatic stress disorder (PTSD).

I was interviewing him for a story about returning soldiers. The interview did not go well; he was unable to sit and talk for more than a few minutes before he escaped outside, racing away from his thoughts and feelings.

There may be thousands, millions just like this young man. It is hard to know for sure, because many veterans do not seek help for mental health problems.

An Epidemic of Suicide, Mental Health Issues Among Veterans

In 2012, 349 members of the military committed suicide. Including Justin Eldridge.

Eldridge returned home from Afghanistan safely — or so everyone thought. He battled with PTSD for some time before succumbing to suicide, his wife and children in the home when he killed himself.

Statistics vary about how many veterans and military members commit suicide; it ranges from more than one daily to an astronomical 22 per day reported by the Veterans Administration. Many deaths are not reported as a suicide, and many suicides are not included in the government's reporting because the person was no longer active military.

But that doesn't matter. One or 22, the deaths are too many. If any other illness was killing one person daily, the public outcry would be tremendous.

It's not just deaths. More veterans and military members are struggling with not only PTSD, but depression and substance abuse, too.

Why many military men and women wait until it's almost too late varies. There is the warrior culture, never admitting you are weak. It is the hopelessness, thinking that nothing will help, anyway. It is the overall stigma attached to mental illness in this society. It's the attitude that you don't look wounded, so you must be okay.

It is the fact that we, as a society, have yet to understand that we send these young people to war, and war means killing and witnessing death and learning to suppress one's emotions. That war takes a toll on the psyche, and whether you call it shell shock or PTSD, the results are the same.

There Is Help Available

Perhaps society is turning around. I work in a position that is closely linked to the military, and my Google alerts have been flooded with articles about the military and mental health, and the resources that are available. I'd like to share a few below:

Reach out, and know that there is hope and help. Please.

I'd like to thank all veterans and active duty military for your service and sacrifice.

I think, they need a professionals to assist mental health problems. Mental health issues need an action not only with the person involve but to their families.

I often wonder how much of my father's alcoholism was fueled by his experiences during WW2, Korea, and Vietnam. He was career army and retired after his stint in Vietnam. I think he suffered from depression and used the alcohol to self-medicate. He did avail himself of the services offered by the VA hospital in our area, including alcoholism therapy, don't know if he took advantage of mental health counseling though. Either way, alcoholism and smoking took a toll on him and contributed to his death. There does need to be a greater awareness of the plight of veterans with mental illness so they don't slip through the cracks. Thank you for bringing the topic to the forefront.