Q and A with 'Electroboy' Andy Behrman

This is a two-part series where I explore the inner-world of Electroboy, Andy Behrman. Mr. Behrman speaks openly about bipolar disorder, substance abuse, hypersexuality, the Electroboy movie, stigma and of course, his dream of being the first 'omni-sexual male' on Mars.

1-We mostly hear about the terrible and frightening sides of mental illness. What advantages has your diagnosis of bipolar disorder provided you?

My own battle with bipolar disorder, an insidious illness which I chronicle in “Electroboy,” knocked me down and it was pretty hard to pick myself up and put together the pieces . But after years of learning how to learn to cope and manage with bipolar disorder, I really think that some of the symptoms, which were originally disabilities, became “abilities.” Today, they are not longer debilitating. I've learned to turn them around and use them to my advantage. Just as examples, whereas so much of my obsessive thinking used up so much of my valuable time, whether it was obsessive list making or cleaning, today I find that I'm able to be extremely organized, stay attentive to detail and really maintain focus on a project at hand.

2-You've never downplayed any of your manic escapades. Is there anything that you have done while manic that you wish you could take back?

Absolutely. I write quite a bit about so much of the risk-taking behaviour in which I engaged, whether it involved drugs, alcohol, sex or breaking the law. In retrospect, I don’t think If I had not been ill I would have been stripping on stages in seedy Times Square clubs and I certainly would not have become involved in counterfeiting art. But bipolar disorder is an illness in which one does not consider the consequences at the time and I'm certain that these choices were symptomatic of my illness. I also don’t downplay any of my manic escapades in “Electroboy” because I decided if I was going to write a book about my experience with bipolar disorder, I wouldn't sanitize it or sugar-coat the illness.

It’s not a pretty illness and it’s not glamorous - - and I decided that coming clean on the reality of it would only be helpful to other people who were suffering. Which is why some people have criticized “Electroboy” for being too raw and gritty. But If I had written about winning a battle with cancer, I never would have been criticized for writing the gory details of battling with cancer. And that’s the double standard and what we so frequently hear today as the stigma of mental illness. It is still not acceptable today to admit to family, friends or colleagues, that you can’t get out of bed in the morning because you are suffering with depression. Not to mention, it could get you fired.

3-What role did drugs and alcohol play in your mental illness? Do you think that totally clean and sober Andy would have had the same experiences?

Drugs and alcohol were an every day part of my existence, like brushing my teeth or showering (except when I was really ill - - I wasn't brushing my teeth or showering regularly - - or for that matter - - doing anything with consistency or regularity). Drugs and alcohol, in my case, fuelled my mania and intensified the illness for me, as opposed to what most people would guess self medicating would do - - to tame the beast.

4-What is the one thing that we as a society are doing that perpetuates the stigma of mental illness?

First, I have to make it clear that I think the word “stigma” is one that has become stigmatized itself and I'm not a huge fan of the word. Stigma is plain discrimination. The media plays a huge role in portraying people who are mentally ill as dangerous and violent, when in fact this is not true. The statistic that people with mental illness are three times more likely to be the victims of a violent crime than to commit one is a powerful one. Of course, tragedies like the one that just occurred in Connecticut, do little to help the cause and the media is not nearly educated enough to report on mental illness accurately and also perpetuates the stigma because of the “news value.”

According to Dr. Chris Gorman, a psychiatrist in Vancouver, “it is simply a matter of feeling that if you mention mental illness, then someone would be compelled to question the inadequate attention and funding that psychiatric conditions deserve.” And that’s the problem. We don’t have a strategy yet. 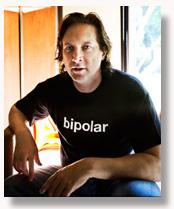 5- If you didn't have bipolar disorder, how would your life have turned out?

6-You talk a lot about sexual experiences in your book. Do you consider yourself straight, bisexual, bi-curious, bi-flexible? Do you think your mental illness has contributed to your open sense of sexuality? Is anyone truly ‘straight?’

I write quite a bit about hypersexuality in “Electroboy,” mainly my own, but so many people with bipolar disorder are forced to deal with this symptom. Without a doubt, my bipolar disorder has exposed me to and made me less judgemental of sexuality - - my own and that of other people. I refer to myself as omnisexual in “Electroboy,” but I think when one is in the midst of a bipolar episode, he or she will “consume” just about anything, whether it’s a man or a woman or drugs and alcohol or go on a wild spending spree. The sexual experiences I write about in “Electroboy” are about a tremendous need to take risks and consume. I'm quite opposed to labels such a gay, straight or bisexual, because I think they too neatly categorize people.

Curiously, I have met very few men or women with bipolar disorder who have not had some type of sexual experience with a person of the same gender - - that’s just comes from listening to thousands of people’s stories. But at the same time, we’re living in a much more open society and straight men, whether they admit it or not, are having sex with other men, either “straight,” “gay” or “bisexual.” I don’t consider myself straight, gay or bisexual and at the same time, I'm not of the belief that a large percentage of the population is “truly” straight. I suppose the definition of the word “truly” is critical and that would be 100% straight: only having sex with a person of the opposite sex.

7-Have you ever met anyone who was ‘normal?’ Is there such a thing?

I've never met her, but I think Lady Gaga is probably normal. No, there’s no such thing as normal. I suppose people would say that somebody like Ann Romney is normal, but I would highly doubt that. And what’s the baseline for normal? 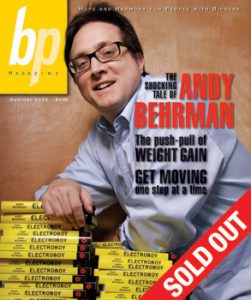 8-You've spoken around the world, have a best-selling book that is about to be made into a feature film and have two lovely daughters. What’s next for Electroboy?

I’d like to be the first omni-sexual male to land on Mars. That would certainly be a great publicity stunt, sell more copies of “Electroboy,” get more people to come see the film, but most importantly, it would make tens of millions of people more aware about mental illness. Perhaps before NASA launches me into space, I’ll finish three books which I'm hoping to launch: the sequel to “ Electroboy,” a book about the pharmaceutical industry based on my experience as the former spokesman for Abilify for Bristol Myers Squibb and a self-help book about mental illness.

Continue to part two of the interview with "Electroboy," Andy Behrman.

Andy Behrman is the author of “Electroboy: A Memoir of Mania,” published by Random House. Electroboy has been translated into six languages. Behrman is a mental health advocate and speaker who promotes mental health awareness and suicide prevention, speaking to college audiences, mental health care professionals and local and national mental health support groups. His writing has appeared in “The New York Times Magazine,” “New York Magazine” and he is a frequent contributor to mental health websites. Behrman has appeared on Anderson Cooper 360, NPR Radio and on the cover of Bipolar Magazine. He was interviewed by Stephen Fry for his documentary, “The Secret Life of a Manic Depressive” which aired on the BBC and he will appear in a documentary called “In His Own Mind,” a film which traces his illness over a period of decade directed and produced by Brian Cresto. ” Behrman maintains a website at www.electroboy.com and can be found on Facebook at "Electroboy Behrman" and on Twitter @electroboyusa Andy lives in Los Angeles with his two daughters who are five and seven and never dreamed he would attend a Parent Association Meeting. His newest project is Hope Village/Chesed Home in San Diego, where he is helping to raise funds to complete a unique residence for adults with serious mental illness.

Do Celebrity Disclosures of Mental Illness Help End Stigma?
Q and A with 'Electroboy' Andy Behrman - Part Two
Ruth McVeigh
January, 30 2013 at 11:11 am

I was married for 22 years (2 children) to a then-undiagnosed bipolar partner I loved with all my heart. Life became increasingly unpredictable with my husband losing jobs and becoming very hard to live with. Once diagnosed, he flatly refuse to even try meds and never has, except when forced to. When our marriage broke up, I wrote a book "Shifting Ground" because at that time although there were books by 'experts' and by 'crazies' themselves, there was nothing by someone whose life had been turned upside down by mental illness.

[...] Q and A with ‘Electroboy’ Andy Behrman – Part Two Posted on December 31, 2012 by Chris Curry var addthis_product = 'wpp-261'; var addthis_config = {"data_track_clickback":true};This is part two of an interview where I explore the inner-world of Electroboy, Andy Behrman. Mr. Behrman speaks candidly about bipolar myths, combating stigma, mania, depression and everything in between. In part one, Mr. Behrman discusses bipolar mania, his use of drugs and alcohol, and hypersexuality. [...]

Why is everything awlful happens, they are mentally ill,I want to say that even us bipolars know from right and wrong. The people that murder, rape or anything like it, comes from just evil.