Saying "No" To Your Eating Disorder

I've talked some before about how eating disorders take over your head - whether that be what you are doing and eating that day, or how you compare to the girl across the room. I can say now, nine months after discharging from inpatient and residential treatment for anorexia, that the voice of the dictator is far quieter than it has ever been. At times, it's even disconcerting - it feels as though I've lost a part of myself, or perhaps as if my best friend was giving me the silent treatment.

Please let me be clear: I am not trying to glamorize my eating disorder. Far from it (and that is a topic for an entirely different post). I am simply marvelling at how I have come to this point, which felt impossible just a few short months ago.

Talk Back to Your Eating Disorder - Say No!

Nothing Changes If You Don't Change Anything

Unfortunately, nothing changes if nothing changes. (Yeah, take a second with that one. I had to read it over about eight times before it made sense.) I spent a lot of time early in my recovery process "wishing" for recovery: just hoping that one morning I would wake up recovered, despite choosing the same actions I had for years. I never woke up magically cured. (Spoiler alert: neither will you.)

In fact, every day I was acting on behaviors thinking I was "maintaining" the status quo, but I was actually getting worse. Every time I chose to listen to my eating disorder and follow its directions, I was driving my proverbial wagon wheel a little further down into the rut I had created. With eating disorders, there is no such thing as maintaining the status quo - every day you are either getting sicker (more entrenched) or working toward recovery.

Saying "No" to Your Eating Disorder 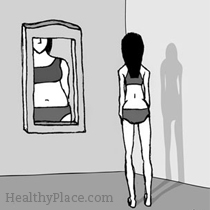 And recovery just means saying "no" to your eating disorder again and again. It won't be easy and it won't be fun. Honestly, it's going to hurt like hell. I cannot even tell you how many nights I have been curled up in bed, crying, thinking that I was positively going to die from not acting on behaviors. To date, I haven't died -- and am, in fact, a much stronger person for it.

Y'all, I've got some of my power back and it is better than I could have ever imagined. So, ya know, "Just Say NO to Eating Disorders!" (Can we get that on a bumper sticker?)

APA Reference
Hudgens, J. (2014, May 1). Saying "No" To Your Eating Disorder, HealthyPlace. Retrieved on 2022, August 19 from https://www.healthyplace.com/blogs/survivinged/2014/05/talking-back-to-your-eating-disorder

Thank you so much for this. I'm not anorexic, but I have binge eating disorder but everything you said applies to me too. I've heard a lot of it before but I've stumbled a few times recently and it really helps me to hear it again. That said, the part about how every day we're either moving forward in recovery or getting sicker is new to me and it's made realise that most days I simply "make do", I'm not actively moving my recovery forward, I'm not engaged with it and this is a big reason for my stumbling. Thanks again. N.

Jessica,
I so agree that nothing will change if nothing changes. Two years ago I reached a crisis point with my ED - excerbated by gastroperesis. I went through intensive therapy and nutrition work and was able to stop the downward weight cycle and gain about 10 pounds. However, since then, I can´t seem to get beyond that level of improvement. I´m not at a life threatening level and am doing much better in many áreas of my life -just not eating MORE. How do you get the conviction to say, I know it will hurt - but it´s worth it. Basically, as far as I´m concerned, I´m OK with where I am (at least that´s what I tell myself). ANy suggestions are appreciated. THANKS.

So thankful that "No" is an entrenched word in your vocabulary! Love you bunches!