In a lot of ways, "eating disorder recovery" is a sort of vague, amorphous thing. How many times have you (or your loved one) said, "I just want to be recovered already!" Or is that just me? In one of my journals from early recovery I wrote, "I want a magic pill, a prayer, a chant -- something I can say or do and wake up the next morning and be normal."

[caption id="attachment_1921" align="alignright" width="400" caption="My therapist did not care for my vision of recovery on the left, so being a snarky jerk, I created the image on the right. (2012)"] 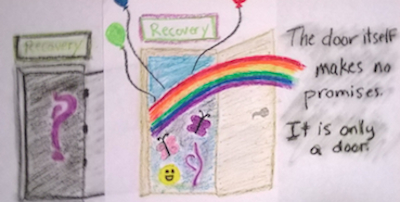 I obviously cannot speak for everyone who has an eating disorder, but I dare say that a significant number of us are what some might call, well, "control freaks." The fact that I was basically going in blind did not sit well with me.

Why Do I Need To Visualize My Recovery?

There is an old proverb that says, "Without a vision, the people perish." I've also heard it stated as "the people wander." Basically, if you don't know where you're going, you're going to walk in circles and maybe fall off the edge of a cliff.

Okay, maybe that is taking it to an extreme, but the reality is, if you don't know what you want your eating disorder recovery to look like, then you have no idea if the decisions you are making and actions you are taking are getting you there. And you can't rely on someone else's idea of recovery, either. My idea of anorexia recovery is entirely different than some of the women I've been in eating disorder treatment with.

There are two ways that I have found most helpful in putting together an idea of what my eatng disorder recovery will look like.

1. The Miracle Question: In 1988, therapists de Shazer and Berg posed this question:

Suppose that one night, while you were asleep, there was a miracle and this problem was solved. How would you know? What would be different?

From the moment you wake up in the morning - what would be different? What would getting ready look like? No body-checking, no scale? What would breakfast look like? Would you even think about it? Do you check the nutrition facts on the side of your cereal? Is your self-talk kinder? Are you spontaneous and willing to go out to dinner with friends on a few hours' notice?

Asking yourself these sorts of questions can help you understand what you want your future in recovery to look like. No one can answer these sorts of questions for you. While someone else might be happy just to be able to go out to a restaurant, I envision recovery as both going out to a restaurant AND ordering something other than grilled chicken and steamed broccoli every time. Maybe you want to be able to know your weight and be okay with it. Maybe you want to be okay with never knowing your weight again.

If you woke up tomorrow "recovered" - what would be different?

2. You Know What Sick Looks Like: When you break it down, what does it look like to stay sick? To give up on recovery and just keep going down the path of your eating disorder? And if that's sick - wouldn't the opposite be well?

Early in my recovery, when I was asked what it would mean to give up and just let my eating disorder take over, these are some words I came up with: miserable, sad, lonely, lying, secrecy, hopeless, depression, loathing, shame, hatred, fear, desperation.

That told me a lot about what I wanted my recovery to look like. I wanted to be happy, honest, authentic, hopeful, joyful. Was skipping lunch going to make me any of those things? Would running X miles? Or was I more likely to become those things if I ate my snack while sitting on my couch reading?

Overall, I've found that a combination of these two questions has helped me construct a vision for recovery - physically, mentally, relationally, emotionally, spiritually. It doesn't mean it is always easy to keep reaching for that vision of recovery, but at least you'll have some idea of where you're going - a measuring stick to evaluate if your choices are getting you where you want to be.

How do you envision your anorexia or bulimia recovery?

I was X lbs. in High School. Now I'm Y lbs. I've had Binge Eating disorder ever since I can remember. I don't want to push drugs..but they are experimenting with drugs like Ritilin for ED. It has been a total game changer for me.

Carrie,
Thanks for your comment. I think medications can definitely be helpful in recovery. I know my recovery didn't start going anywhere (I was just switching symptoms) until I started on a regular medication routine.
I'm glad you're pushing forward in your recovery and finding some light at the end of the tunnel!
j

I'm so afraid of recovery I can't even bring myself to say it. For me to its not knowing what that will look like and the idea of change is just so scary. But I no in my heart that where I am isn't what I want.

Sarah,
I can absolutely relate! Not knowing what "recovery" looked like it was held me back for so long. Honestly, I started visualizing my recovery almost a year before I really started my recovery by going to treatment. I think visualizing your recovery is the first step. If you know where you are isn't where you want to be, where do you want to be?
Let me know if I can help you further visualize your recovery!
j

That's so true Jess! The scary part about change is that we dont know what the 'other side' will look like, but we do know that 'here' is not a good place.
Being authentic takes courage. Opening that door takes courage. #thankyouforsharing