Addicted to Starving: The Lure of Anorexia 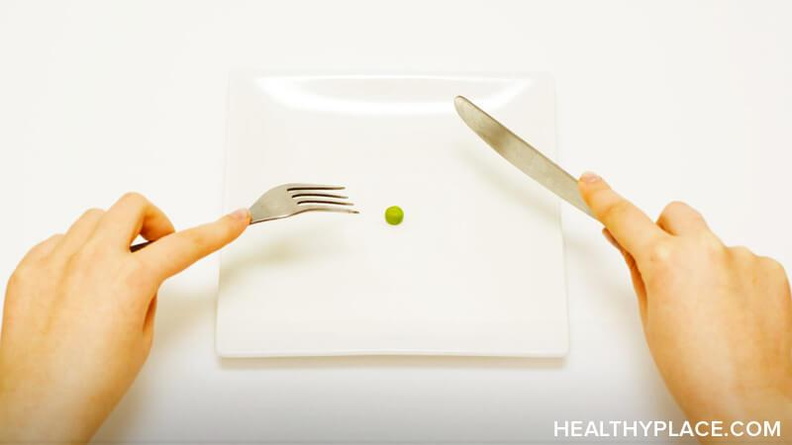 Addiction is a strange thing. No one sets out to become addicted, whether it is to cigarettes, prescription medications, alcohol or any other substance. My father had been an alcoholic and he had made our lives a living hell. I never wanted to see myself in that light.

Then I developed anorexia nervosa. At first, I didn't think of it as an illness of addiction. My husband and I argued about it one night several years ago. I had again started the cycle — restrict, starve, purge with laxatives as needed, and repeat every day.

"You're addicted to starving," he said.

"Anorexia isn't addiction. Anorexia is totally different," I argued. "If you would read some books or something . . . You don't know what you're talking about, you don't understand at all."

"I did read that one book, and anorexia is an addiction. Just like alcoholism."

Anorexia as an Addiction

I felt as if he had slapped me in the face. I was not an addict. My father and grandfather both had been addicted to alcohol, cigarettes and gambling. I watched my father battle alcoholism for years; his drunken rages ruining my childhood and adolescence, making me hate Christmas for years because what I most remembered was decorated trees being torn down in anger and hiding in the bedroom as my mother and father would yell at each other, as if they couldn't stop some sort of weird dance they had to perform every holiday.

I swore my life would be different; that I would be different. Then I went away to college and drank my way through two years at Michigan State University, losing the full-ride scholarship I had earned for being such a good student in high school. I was drinking one night at the bar when I was offered a cigarette, and I became a full-time smoker. I eventually ditched both these habits after graduating with my degree in psychology and working as a social worker, and I began to think I had escaped the family curse of addiction.

Anorexia Is Being Addicted To Starving

I was not an addict. I had anorexia. The two things were different in my mind, and I couldn't believe that was what my husband thought of me.

"You're addicted to starving," he repeated. "You can't seem to stop, no matter what. You know it will kill you, but for some reason, you still starve yourself. That's addiction."

Much later, I realized he was right. I was addicted to starving. Every time I came close to a healthy weight, I pulled back and started cutting out food. I craved the feeling of starvation, the emptiness I felt inside after purging with laxatives, the lightheadedness and dizziness and the way my head would swim if I stood up too quickly. I craved the feeling of bones and a concave stomach and thighs so thin they didn't touch. I craved thinness the way I imagine my father had craved a cold beer after a day at the factory.

I was addicted to starving, and for a long time I struggled to overcome that addiction.

Note: I decided to focus on the addictive qualities of anorexia nervosa to reflect on my personal experiences. However, there are studies and articles that explore the addictive nature of other eating disorders, and I invite you to share your stories in the comment section of this post.

APA Reference
Gambrel, A. (2011, July 15). Addicted to Starving: The Lure of Anorexia, HealthyPlace. Retrieved on 2023, February 4 from https://www.healthyplace.com/blogs/survivinged/2011/07/addicted-to-starving-the-lure-of-anorexia-part-i

Believing In Your Right To Recovery: Silencing The ED Voices
Addicted To Starving: Breaking The Chains (Part II)
ds
September, 27 2014 at 10:18 am

I am on a starvation high right now. It is ecstacy. Lifesucks people suck and this horrible world sucks. God is the only one who doesn't suck. I want to be in his arms. The high is pure heaven. Endorphins have kcked in sand I'm able to struggle throughbeach day.

At the treatment center I went to ALL ranges of disordered eating are treated the same -- as an addiction.
It is all compulsive eating.
They gave us a book and put us on a meal plan based on Food Addiction (sugar-free and flour free).
I have a difficult time discerning if I am addicted to starving or addicted to food. I am eager to embrace anyone that tells me "You are an addict. You can not have a sugary cake or bread because it will send you into a relapse" I can easily accept that because that is exactly what Anorexia tells you.
I am so confused. But I have faith that i will get it all straightened out soon.

OMG this is not a good treatment plan. Part of recovering from an eating disorder is letting go of food rules, not creating more! I would recommend you seek other professionals for your recovery, as that treatment centre seem to just enable more restriction.

I often wondered myself if anorexia is an addiction. I have some experience with this cycle. I am still not entirely sure if its the act of deprivation (starving) or the sense of control I got from restricting my intake and ignoring the accompanying physical sensations.