I was sixteen and on the edge of puberty when I realized I hated my body. I hated having breasts, and the fact that people actually noticed them. I hated the fact that my stomach was round, my thighs were round, even my hair was too round.

I felt awkward and ugly, and that feeling plagues me to this day as I recover from anorexia. 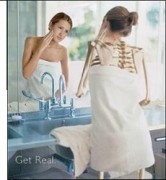 Early Problems With My Body Image

I still find it humiliating to remember how it felt to be a teenager. I struggle to remember and write about how it felt to enter puberty, one of the last ones to do so, and to suddenly face the fact that I had breasts, hips, and thighs — a woman's figure.

I look at the few pictures that survive from that time period, and I see a shy, gawky teenager trying to hide her body. Trying to fold into herself. Trying to pretend she wasn't becoming a woman.

For a long time, I believed that I developed anorexia at the age of 42. However, now that I am finally engaged in therapy, I am discovering that might not be true.

I was the first one in my family to attend college. I went to a large state university, paid for by loans and scholarships given to me for doing so well in high school. I didn't fit in, because many of the other students came from wealthy families and I did not.

Then I decided I was fat.

Let me be clear that I find the word "fat" highly offensive. It rarely describes anyone accurately, and it is often used in a pejorative sense. And honestly, I think this country has gone way overboard in its fight against obesity. I am not saying that obesity is not a problem. However, most people fall within a spectrum weight-wise, and I don't find it useful to constantly focus on extremities. Both low and high weights can and do cause multiple health problems, and in some cases, death.

But I digress. Anyway, I decided I needed to lose some weight and went on a swell diet of mainly coffee, diet pop, and very little else. I did lose weight, and I also lost what little self-esteem I did possess. I went home during a break, hiding my condition with baggy sweatshirts and jeans.

And that was the start of almost three decades of self-hatred.

I went through my twenties loathing my body and trying at every chance to mold it into what society deemed was acceptable at that time. I started wearing makeup and spent hours doing my hair. I went to a tanning salon and slathered baby oil on me, worshipping the sun for hours even though I knew this was not very healthy for me. I wished I could cut of the pieces of my body that stood out.

Then came the nineties and the rise of heroin chic via Kate Moss. For a long time, I scoffed at the idea that that could be "the ideal body," whatever that is. I thought I had made piece with my body, not realizing that my self-hatred and loathing were only dormant and would eventually explode as I again started starving myself.

I can only write about my experiences with body image through the lens of my anorexia. However, I believe that body image and problems with body image is a topic that transcends size and increasingly, gender. I think most of us are susceptible to the constant barrage of images, many of them altered and false, that bombard us daily.

I am not saying that eating disorders are caused by the images that society presents to us. Eating disorders are complex illnesses that have multiple causes, and more research has to be done before anyone can say with certainty that this or that causes them. But it certainly doesn't help, particularly in recovery, either.

I am now at the step that always causes me to relapse. I am gaining weight — and for each person, recovery will be different — and learning yet again to accept my body's natural shape.

The problem is that my body is not yet at its natural shape, and therefore it feels alien and strange to me. I am told that it will straighten itself out eventually, and I know this is true from the first time I successfully weight-restored.

However, I still am at a place in which I hate my body. It feels too soft in some places, and jiggly in others. I avoid mirrors as much as I can, and often try not to look down as I shower.

Learning to Make Peace with My Body

Weight restoration — in my case — is only the first step toward recovery from anorexia. I won't consider myself recovered until the eating disorder voice stops and I have made peace with my body. Making peace will consist of not constantly thinking and berating it every chance I get.

How will that happen? I am not sure, and I am just starting to explore some ways to learn to love my body. I am thinking about doing yoga and walking, since I am still restricted from most exercising. I hope this will help me appreciate my body and the fact that it still works and is relatively healthy in spite of the abuse I have dealt it.

I am also trying to stop putting myself down every chance I get. This will be hard since it is practically a lifelong habit. However, at least I am now aware.

Do you have problems with your body image? What do you do to combat negative body image?