In part one of this series, I talked about the lure of anorexia and how, at first, I didn't think of anorexia as an addiction. But it is and, of course, the first step to breaking the chains of addiction to starving is both very simple and complex at the same time.

I needed to eat and reach a healthy weight. That required me to eat three meals and drink three Ensure Plus daily, and watch as the scale slowly climbed upward. This is very frightening for those of us struggling with anorexia nervosa.

But there is no other way. Until I achieved full and consistent nutrition, the eating disorder part of my brain was going to keep telling me to starve myself. I would be forever chained to anorexia. 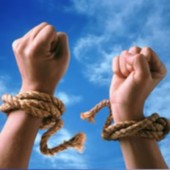 I was supposed to be a shining example of recovery. Everyone said so when I entered the hospital for treatment of anorexia for the first time in August 2008. I had only been battling anorexia for about a year. I ate everything they put in front of me, and after my first-day meltdown, I kept my mouth shut and adopted a passive-aggressive approach to treatment. I didn't know then I wasn't helping myself; I was just marking time until I could get out of the hospital and start starving again. Several nurses and fellow patients were very impressed by my supposed motivation, not realizing I felt as if I were dying on the inside. Several nurses said I would go home and continue to eat and put anorexia behind me. A patient who had been battling anorexia for about fifteen years said many anorexics do not fully recover, but that I was different because of the short duration of my illness and that I would be doctor's success story; the one who made it, the person who recovered and made all his hard work and dedication worthwhile.

It didn't quite happen that way. I ended up being hospitalized five more times for anorexia and anxiety related to trying to recover between December 2008 and February 2009. I took a three-month sick leave from work, returning to work in May 2009 after reaching a healthier weight. Most of my family and loved ones felt I was recovered, and I could almost hear them breathe a collective sigh of relief now that Angela had stopped starving herself.

Learning To Believe In Myself

But I wasn't. The lure of anorexia was always just at the edge of my brain, teasing and taunting me. I relapsed in January 2010, becoming so sick I was hospitalized just a month later and was connected to a NG feeding tube. I couldn't seem to break my addiction to starving and becoming.

"You are so much more than your body size," my doctor said during one session last spring.

I sat there quietly, thinking about that remark. What does he mean? Who am I? Who was I? Unwanted tears—God, I hate being weak; I used to be so strong—threatened to spill as I thought about what I might be besides my body size.

"You have so much to give to the world," he continued.

I felt confused. What do I have to give to the world? The world has demanded that I be thin and I have become very good at accomplishing that. What more does the world want from me? How thin do I need to be to be THIN ENOUGH? But I knew that's not what he was talking about.

"In spite of everything, you are still reaching out, trying to help others," he said. He mentioned my gift for writing and how I try to help people understand anorexia and those who suffer from it with my words, such as with my public blog about my struggles with anorexia that I had been writing for years.

"But what about helping Angela?" he asked.

Sadness filled me, and I whispered, "I don't know."

Then my husband and I separated twice because of my illness. I realized I had to find a way to break anorexia's grip on my soul, or else I would have no life. The first night we separated, I slept on and off for about two hours at a time. I kept listening, thinking he might change his mind and still come home. It was the loneliest night of my life when I realized around 4 a.m. that his van wasn't going to pull into the driveway and he wasn't going to come through the back door.

I wanted to die. But a stronger feeling took over. I wanted to live, really live. Live as I haven't lived for years since anorexia took over. I couldn't stomach food that first day, but I could drink six Ensures (three regular and three Plus.) And so I did and it was the beginning.

I've struggled and have had several slips since then, but I have not become fully engulfed by anorexia and I have worked hard this year to maintain a healthy weight. The chains became broken when I realized I had to break them and set myself free.

I'm beginning to feel an even bigger hope. That I will become myself again. The person I was before anorexia, only better and hopefully, more understanding and compassionate of others.

I will never be able to forget that I was addicted to starving. During times of stress, the lure to starve and become thin as a way to deal with the sometimes overwhelming aspects of life is still tempting. However, the drive to live and have a normal life is stronger, and the chains that once held me are broken.

Addicted to Starving: The Lure of Anorexia
Weight Stigma: An Enduring Prejudice
Missy
August, 19 2011 at 6:04 am

So very inspiring.
This gave me chilly-wills
But a stronger feeling took over. I wanted to live, really live...
I’m beginning to feel an even bigger hope. That I will become myself again. The person I was before anorexia, only better and hopefully, more understanding and compassionate of others.