What Happens When Infidelity and Mental Illness Collide?

Dealing With a Partner's Infidelity and a Mental Illness 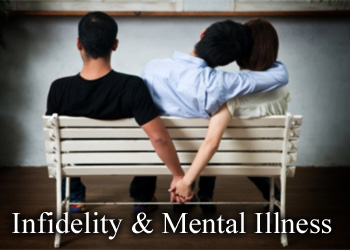 During my last serious relationship, I suffered a depressive episode. My partner was definitely understanding: he'd known about my bipolar for several years and it had never caused any issues in our relationship (Should People With Bipolar Be In Relationships?).

In the beginning of my episode, my boyfriend was supportive. He understood why I had to take time off my job and that my mood would be lower than normal. He seemed to get that it was hard for me to maintain my focus on anything, including him. And he respected that I just wouldn't be talking to him on some days because it was just too hard. In the midst of that episode, even on my worst days, I felt secure in the knowledge that he cared for me and would support me emotionally during my depression.

But soon, I noticed a change in my boyfriend's behavior. He wasn't as available to me as he had been, and he'd started spending less and less time with me. Eventually it came out that he'd been seeing another woman for months, and it had become serious enough to warrant our breakup. I was devastated.

Dealing with my boyfriend's infidelity and a mental illness at the same time deepened my depression. I believed that my disease had driven him away. I ruminated over our interactions and concluded that I was unlovable and that's why he cheated on me. I pondered endlessly over why this new woman was better than me and believed that everyone was better than me.

My brain left no room for rational thought about the end of my relationship, or my ex-boyfriend's role in the matter. A month later I was hospitalized for severe depression which was due to several factors, but clearly exacerbated by the infidelity and exit of my boyfriend.

Confronting Your Own Infidelity and a Mental Illness

When you cheat, it also causes emotional turmoil when living with a mental illness. Before I was officially diagnosed with bipolar disorder, I went through periods of hypersexuality that mark the disease, often coinciding with mania. During an episode of hypomania, I actually cheated on a boyfriend with a man I met at a bar.

On a Saturday, I called my boyfriend to see if he wanted to get together that night. He declined, saying that he had work to do on a new venture and that we could get together the following day. Not only had I wanted to see my boyfriend, but I also wanted to have sex with him. I needed to feel the attention of sexual activity as well as the release of pleasure and endorphins. And I felt rejected and unattractive when my boyfriend postponed our meeting.

Instead of working through my feelings, I met up with a girlfriend at a bar where I struck up a conversation with a single gentleman. By the end of the night, I'd brought the man back to my friend's house for sex. At the time, it was fun. In the cold light of day, I felt guilty, out of control and depressed. I never told the boyfriend about what happened, just as I never told him about my disease. My infidelity and mental illness were both things I kept to myself, along with the shame of having cheated in a relationship.

How Mental Illness Stigma Affects Romantic Relationships
When Changing Therapists is Necessary
Cancerdad
November, 28 2019 at 4:18 am

My wife was sick. I had been through 5 jobs due to contractual issues. Not fired. I had cancer as well and reconstructive surgery along with being financially not able to support ourselves... All the while being the sole support and caregiver to 3 children and a wife with cancer..... I broke down. I had an affair of 8 months... I was looking for anyone to hold onto me and make me feel. Normal....

@mud Please leave your wife! She doesn't deserve to be cheated on the way you're doing her. You have a problem and you need help. Seek counseling, but please leave her and break up. She would really appreciate it in the long run vs if you just drag her along for years while you cheat. She will find out one day.

i am a manic bp. this happened to me 9 years ago with a woman i was seeing for 3 years behind my wife's back. at the time i felt loved,and wanted by her. someone who appriciated me for who i was. i wanted sex,someone to laugh with, whatever. today i am better,ashamed for what i did being bipolar u want sex well i do today,tonight,every morning. it's hard on me.