Furry Therapist: How My Dog Has Helped My Child with His ADHD 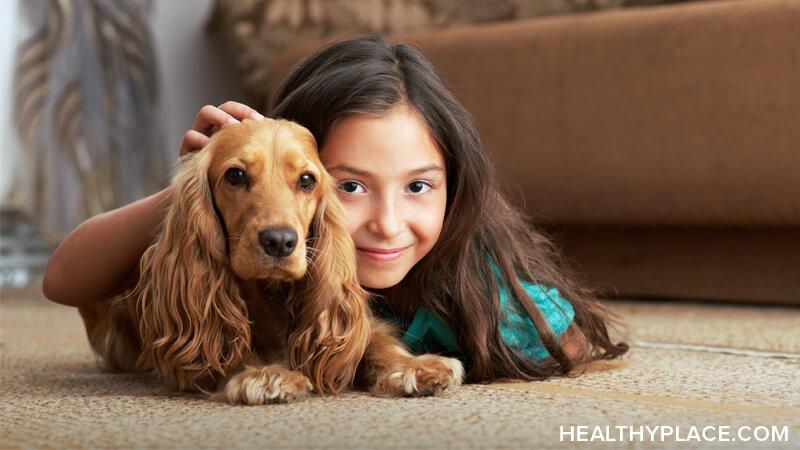 There are two very important people in my life who depend on me for pretty much everything. They're both young. They're both a handful. And they both have so much energy that they drive themselves--and me--a little crazy with it. One of them, though, isn't a person at all. He's my dog, and he's done more for my child's attention-deficit/hyperactivity disorder (ADHD) than anyone else.

This might sound far-fetched, but it isn't. According to Gina McDowell, a counselor and educator at the Big Lots Behavioral Health Pavilion, and Steven Feldman, president of the Human-Animal Bond Research Institute, dogs are like fluffy, slobbery antidepressants for people. Studies have shown that this is what they do for their owner's mental health:

That's what dogs have done for other families. This is what mine has done for my family and my child's ADHD.

My child is learning that his actions affect other living things and that those other living things have feelings that matter just as much as his own. This has been a hard lesson for him to learn because he always goes so fast. He thinks fast, talks fast, moves fast--whatever he does, he does it fast.

"How fast are you going right now?" my sister-in-law asked him one day when his ADHD was really acting up.

"200," he answered simply (and pretty accurately).

With his brain doing "200" all the time--and considering how young he still is--thinking beyond what's in his own head is challenging for my child. He has so many emotions and thoughts and urges that he doesn't have much room left over in his short little attention span to focus on what anyone else feels, thinks, or wants. With my dog, though, it's a different story. When he wants something or when something distresses him, it's just about impossible to ignore it. My dog has managed to teach my child something better than anyone else has--how to grow past his ADHD and into empathy.

Our Furry Therapist Helps My Husband's and My Mental Health Too

Happy parents equal a happy kid, right? In our family's case, that's definitely true. Not only does my child have ADHD, but I have depression and anxiety, while my husband has posttraumatic stress disorder (PTSD). Our dog has helped all of us with our struggles with mental illness.

When my mental health problems are at their worst, my parenting suffers, and it's excruciatingly obvious to my child that Mommy isn't okay. When I'm short-tempered, fatigued, and unmotivated, it aggravates his symptoms, too. However, if I take a moment to appreciate how fluffy, warm, loving, and goofy the dog is, I feel just a little calmer and better equipped to be a parent to a child with ADHD. After all, it's a tough job, and I could use the emotional support of someone who, no matter what, thinks I'm simply fabulous.

Do you have a dog? How has it helped your child with his ADHD or other mental illness? Let's talk about it.

APA Reference
Sharp, S. (2021, July 7). Furry Therapist: How My Dog Has Helped My Child with His ADHD, HealthyPlace. Retrieved on 2023, February 7 from https://www.healthyplace.com/blogs/parentingchildwithmentalillness/2021/7/furry-therapist-how-my-dog-has-helped-my-child-with-his-adhd