What Works When Disciplining a Child with Mental Illness 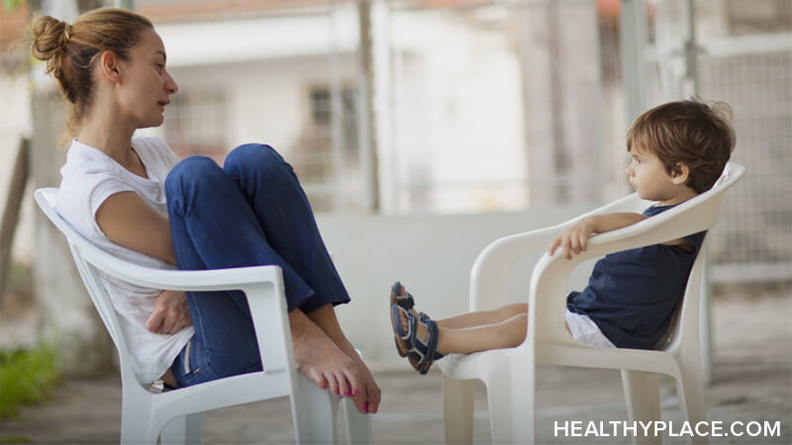 As parents of children with mental illness, we witness extremely bad behavior. We know it is not okay to be disrespectful or put holes in walls. Yet, traditional discipline methods don't work. We become desperate for effective parenting tools for our kids (The Challenge of Difficult Children Homepage). The key is to understand what is driving the bad behavior. Is it the kid or the mental illness?

Is Your Child Acting Out with Bad Behavior or Experiencing Behavioral Symptoms?

Disciplining a Child with Mental Illness at Home

My son Bob kicked a hole in the wall (one of many over the years) when he was 10 years old because his dad told him he was not going to basketball practice in shorts when it was 15 degrees outside. Bob became frustrated because he realized he would have to take off his basketball shoes, put on warm-up pants, put the shoes back on lace them up, and then repeat the process at the gym with everyone watching and judging him. His social anxiety skyrocketed and he kicked the wall.

Dad got mad and felt Bob deserved to be disciplined, "He's got to learn to control his temper!"

The truth is, a time-out, loss of privileges, or any other traditional discipline would have no impact on the situation. Believe me, we've tried them all. Sometimes attempting to discipline a child with mental illness makes the situation worse.

I've discovered my best response is to relate the incident to my son's therapist so she can give Bob better coping skills to deal with his frustration.

Disciplining a Child with Mental Illness at School

I use the same philosophy at school. It is important to differentiate bad behavior from the behavioral symptoms of mental illness. Unfortunately, teachers and administrators are rarely savvy at this skill. Often, it is our responsibility as parents of children with mental illness to educate the educators.

My son Bob's middle school vice principal, Mr. H, had me on speed dial. According to Mr. H, Bob was sent to his office because he was disruptive, disrespectful, loud, out of control, not sitting in his seat, sleeping, or otherwise not in compliance with school policy.

I should mention Bob was normally a good kid who was typically quiet, respectful, compliant, attentive, and horrified if singled out or sent to the principal's office.

I reminded Mr. H of my son's Individual Education Plan (IEP) and explained Bob's bipolar disorder and social anxiety disorder. I described the behavioral symptoms and how they might look like disrespectful or disruptive behavior in the classroom. I said that my son's swearing when unstable (unwell) is like a kid coughing or sneezing with a cold. Bad behavior at school is often a symptom of Bob's mental illness (Is Mental Illness an Excuse for Bad Behavior?).

You Can't Discipline the Mental Illness Out of Your Child

Then we discussed what should happen next. A detention was not the answer. But there were many options worth considering.

The point is to recognize when the mental illness is acting up and respond appropriately.

Disciplining a child with mental illness for bad behavior is like telling a kid with asthma to stop wheezing and just breathe.

APA Reference
Halli, C. (2014, September 28). What Works When Disciplining a Child with Mental Illness, HealthyPlace. Retrieved on 2021, April 15 from https://www.healthyplace.com/blogs/parentingchildwithmentalillness/2014/09/what-works-when-disciplining-a-child-with-mental-illness

It would be great if several people or 1 person can start a list of disciplining practices that have worked for them. This way we can try some of these and see which one works for our child. Also, I have been researching and can't seem to find out, how to tell the difference between mental illness behavior vs kid bad behavior.

My 14 year old brother is also have behave issues, sometimes he even harm himself out of frustration, he always want money beside he gets lots of pocket money, he blackmail my parents with many ways, but mostly he shout at us, he yelled, yelled alot sometimes I feel he is suffering from some mental disorder, and his love for gta game is making him even more aggressive, he never speak in his real voice always in egoistic voice which is very loud, sometimes I got headache due to that but big problem is he never study, he skip school and he even try to scare a teacher by using a bench. What should we do???

Hi, Smalhotra! That sounds tough and scary for you and your family. I'm sorry you're going through that. I'm not sure where you live, but if you're in the U.S., chances are that your local county has child mental health services that can work with your brother. If your parents call the county and request help, that may work. Schools tend to have social workers, too, and if your brother is having behaviors at school, he is most likely known to that social worker. That person can help a lot as well. Your parents can talk to that social worker and see if they can provide referrals about where to get additional help. There may be child crisis lines for your county as well, and if you Google "child mental health crisis line for [your city here]", that may bring up some helpful phone numbers to call when your brother is getting particularly unsafe at home. If he's ever threatening you or your family in a physical way, you may need to call 911. I know that's SUPER hard to do (as a parent of a young child with mental illness myself, that thought is so scary), but the police can transport him to a hospital to get help for his mental health AND keep you and your family safe. When calling 911, state it's a mental health emergency and that officers do not need to have their lights and sirens on when they arrive. Ask for police officers specifically trained in mental health crises, if they're available. That helps decrease the likelihood that the police may misinterpret the situation. That would hopefully be last ditch effort, though. The school will hopefully have the resources your family needs! Good luck, and I hope your brother finds help and your family finds some comfort.

I have been reading alot of info about schizoaffective,conduct disorder, ODD, GAD, to start. I find myself trying to research ways of disciplining and have not been very successful. I hate sending my child to school because of the last 3 years has been terrible and cops are always getting involved. Does anyone know of any good techniques that have worked for othwrs? Help. I have seen comments about needing time to settle down and I have asked repeatedly and still am not able to get the point across. They say that he is manipulative and just is trying to get out of class. Help!!!!!

My Son Is 14 And Has Been Diagnosed With A Severe Conduct Disorder He Has Been On A Lot Of Different Meds But What Works Is Just Listening And A Lot Of Patience .

Our precious granddaughter has been in the hospital for the past week due to a mental episode. I just pray the doctors have been able to give her the skills she needs to cope. Having suffered depression myself, I know it is difficult to deal with.

As a former teacher I highly recommend Dr. Greene's literature when teaching or raising all children, not only those living with mental health or other special needs. Thank you for sharing your insight. It is always better to work cooperatively with the child. Being adversaries never helps.

Thank you for this. I have several clients and a couple of friends who struggle with children who have mental illness, and I find it tragic that so many places like schools and churches don't have systems in place to deal positively with these kids.

Jenise,
You're right, many school and churches have no idea how to deal with children living with mental illness and the bad behaviors the illness causes. I have found myself educating the educators many times. We have a lot of work to do.

Hi T f,
I regret to tell you that we don't have an author working on this blog right now.
- Natasha Tracy
- Blog Manager

Personally for my diagnosed self and my diagnosed children the best thing for an out of control situation is isolation and a chance to reboot. Being removed from a volatile situation and public scrutiny is key to getting back into control. Often over stimulation caused the problem in the first place. Walks or runs in nature away from all the chaos can make a world of difference.

Hi Betsy,
Isolation and a chance to decompress does wonders for my son, too. Thank you for sharing your strategies.

My son has serious behavioral issues, and we learned early on that disciplining him was only making matters worse. We have learned that if you allow him to sit down, and write a letter explaining to you why he reacted the way he did.. You get a completely different insight to the child's' mind. My 7 year old can tell you emotions you would have never thought he was feeling. Not sure if this would work for every child, but it has been a tremendous help with mine.

Cheryl,
Thank you for your comment. It's great you have learned what works with your child. Even better that you get insight to his mind. It's important to remember that the outside behavior we see and sometimes judge, does not always match what is going on inside the mentally ill child's head. My 14 year old daughter, who does not have a mental illness, also is good at writing down her feelings when she cannot articulate them. My son, on the other hand, would admit regret and remorse almost immediately after he acted out. Now at age 17 he can express his anger in words (though graphic) thanks to years of therapy.

Dr. Ross Greene has done a great deal of work in this area. Here is a link to his website if interested.

Hi Sue,
The Explosive Child by Greene is very useful when parenting a child with an explosive temper. It opened my eyes to alternative methods of parenting as traditional methods don't work. It also provides insight to the child's perspective and what may be driving the behavior. I agree his website is a great resource to augment parenting a child with mental illness. Generally, I turn to my child's therapist when I am struggling with his unexplainable bad behavior. Thank you for your comment.