Losing a child is a parent's biggest fear. Mine is to lose my child to suicide. My son, Bob, lives with mental illness and has experienced suicidal ideation. He was hospitalized at age 15 when his suicidal thoughts were too strong to battle on his own. When I heard of Robin Williams' death, I had mixed emotions.

I felt terrified because the suicide statistics for teens are dire. Suicide is the third leading cause of death for people ages 15-23. Roughly 90 percent of those who die by suicide have a diagnosable and treatable mental illness.

Symptoms in teens are often overlooked or dismissed as normal teen behavior. I was told Bob's extreme irritability and apathy were normal for an adolescent boy.

A teen is considered at imminent risk if they have suicidal thoughts, a plan, access to said plan and a predetermined time frame of less than 24 hours. I had the heartbreaking experience of listening to Bob detail his morbid plan to hospital admission staff. He admits he came very close to completing his suicide plan.

Learning that Robin Williams' method of suicide was the same as Bob's plan brought my bleakest fears to the forefront.

My mixed emotions surrounding Robin Williams' suicide include fear, sadness, compassion and hope. When I push through my personal fears, I am hopeful that the much needed conversation about mental illness will grow productively under the brilliant light of a beloved comedian instead of the darkness of another mass shooting. In fact, the media frenzy has been enveloped in love and support for Robin Williams and his illness. 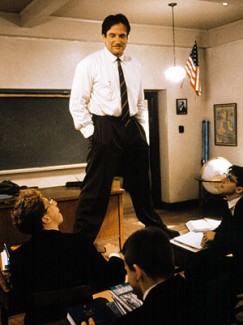 I am hopeful that with more positive dialogue about mental illness, the mental health stigma will decrease and more teens like my son, Bob, will be able to reach out for the help they desperately need.

Parents Can Learn from Suicide

Robin Williams' death is a reminder, if not a wake-up call, that mental illness can be fatal. As parents of children living with mental illness we can learn some important lessons.

I believe Robin Williams' death will not be in vain if we continue to discuss mental illness and suicide. In so doing, we help our children understand mental health, access treatment and ultimately live healthier lives.

Explaining Mental Illness to Your Child and Others
My Teen Stopped Taking His Psychiatric Medication
vibi mere
August, 20 2014 at 8:06 am

Sad for tragedy of a great comedian who brought much laughter to millions!He must have struggled a lot deep inside and ended up! My heart goes for him! Having a bipolar disorder brother who is also well educated and talented,yet loss his job, his wife and living with two little kids!Our family members cannot rescue the kids as he does not allow us to take them away, he is in mania phase that we are helpless, he refused to take medication.I am having sleepless night thinking what will happen to children and himself! what step should we take!

It sounds like you care a lot about your brother and his children. It must be so hard to watch him go through a difficult time. I can understand why you feel confused because you do not know what steps to take to help him. As family members we can educate ourselves about mental illness and support our loved ones.

To Rita: I am a mental health advocate and National Alliance of Mental Illness (NAMI) member of long standing. My husband and I feel your pain, as we have dealt with the same issues of poor services for our children with mental illness diagnosis. Two of my adult children are no longer with us. They succumbed to their symptoms and took their lives. We have a third adult child at risk. My coping skills are my faith, caring friends and family and a loving husband who supports me as well as the wonderful family education I received and taught from the NAMI organization.
I am not ashamed to say that I also take an anti depressant every day. Battling both the dysfunctional mental health system and your relative to find a treatment that works is exhausting, expensive and frustrating, to say the least. It is almost too much to expect you, as a Mom, to be everything to your son when he is so ill. I would urge you to look up the NAMI website and find when the next Family to Family class is in your area. Wonderful support and education for family members such as yourself. You are not alone!

OKAY enough already...I have been dealing with this issue my whole life, personally, as a nurse and having mental illness in my family and directly w/my son. Unless you have a butt load of money there is NO help except Jesus and the person suffering the most has to seek him....which in my case leaves us without help. The help that is offered has been a never ending merry go round of medications that cause more harm than good, yet thru counseling meds multiple hospitalizations, the problem remains with no end in site. In the meantime Im getting caregiver burnout so where is all this so called help. I even tried writing Dr. Phil....no answer

Hi Rita,
It sounds like you are overwhelmed because you are a caregiver for your son. It is really hard to do what you do and come home and deal with it at home, too. I agree the merry go round of medications and hospitalizations is exhausting and discouraging. As parents, the responsibility lies on our shoulders but like you said, if the person suffering doesn't seek help, it feels like we can't win. I can tell you care a lot about others and your son. Thank you for your comment and the advocacy you do for your son everyday.

Thank you, Christina, for this. Our mental health professionals soooo need to have some "breakthroughs". Our son died at age 27 from suicide.
It has been 12 years in July, but Robin Williams' suicide death has really brought mental health to the "light of day"; and for that, I am grateful.

Diana,
My heart aches for your tremendous loss. Like you, I also see a bright light shining on mental health because of Robin Williams' tragic death. I am hopeful the conversation will continue in a positive direction.

Childhood ADHD and Stealing: What's Going on with Your Kid?
Life with Bob
It's Not Unusual If Your Child Hears Voices
Life with Bob
When Your Teen is Admitted to a Psychiatric Hospital
Life with Bob
Child's Mental Illness Can Make Your Marriage Sick, Too
Life with Bob
The Difference Between Oppositional Defiance (ODD) and DMDD
Life with Bob
Tips to Manage DMDD in the Classroom and Beyond
Life with Bob