As I mentioned in this week's audio, Bob recently suffered a reaction to one of his psychiatric medications. He’s fine now, but the discussions between his father and I that have followed leave me wondering if he’ll survive the fallout.

My Ex Believes Bad Parenting, Not Bipolar Disorder or ADHD, is Responsible for Our Son's Behaviors

Bob’s initial symptoms of bipolar disorder and ADHD unfortunately coincided with the very messy breakup of my relationship with his father. Perhaps because of his animosity and opposition toward me, or for other reasons, Bob’s father has been at odds with me (and everyone else) in terms of Bob’s treatment from the beginning. Even when Bob was at his absolute worst—unable to remain in class for longer than a few minutes, putting himself and other kids in harm’s way, physically attacking teachers and other adults who intervened, and unable to provide any explanation why—his father maintained there was nothing wrong with Bob, that all he needed was consistent discipline, and I sought to medicate him into submission because I didn’t “want to parent him.”

In the five years since I filled Bob’s first bipolar medication prescription, his father has voiced his opinion on the matter to therapists, psychiatrists, judges, lawyers, social workers, teachers, principals, strangers, and anyone who will stand still long enough to give him audience. He has withheld medication while Bob is with him, either blatantly refusing to take it from me during our exchange, or not giving it to him without telling me. He has refilled prescriptions and then kept the refill—leaving me unable to obtain a supply because of pharmacy and/or insurance restrictions. Although these actions are annoying, I’ve learned to deal with them.

Disagreement Over Bipolar Diagnosis and Treatment Has Impact on Our Son

What’s most difficult to deal with is how this constant conflict affects Bob. He hears two stories. In one, he has an illness (albeit one that is “okay” and doesn’t make him a lesser person) and the psychiatric medication helps him to control his behavior and thoughts. In the other, the pills are his mother’s way of controlling him, and he wouldn’t need them if he could just be better. 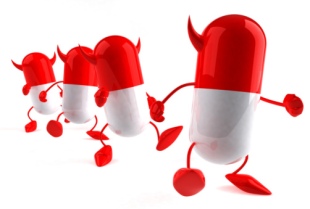 Although things had improved more recently, the recent episode of acute dystonia (dystonia is a neurological movement disorder, sometimes a side-effect of antipsychotic medications, in which sustained muscle contractions cause twisting and repetitive movements or abnormal postures.) has convinced Bob’s father he is right. We were advised by the ER to discontinue a few of Bob’s medications until we could talk to his psychiatrist. Bob informed me Sunday night he hadn’t been given any medication since Saturday morning; that his father told him “if I do a really good job at school, I can prove to you I don’t need pills.”

Nevermind the obvious physical dangers of quitting all psych meds cold turkey—what kind of psychological damage does this message cause? You have to take pills because you’re not good enough. If Bob tries to “control” this and fails, what impact will that have on his already fragile self-esteem?

Compassion Important in Caring for Children with Mental Illness
When Parents Disagree on Psychiatric Treatment - Part 2
herb
March, 18 2015 at 5:23 pm

Thank you so much for your heartfelt honesty and support! Unfortunately, my ex is "too smooth" to ever look like a total idiot, or demonstrate poor judgment, in front of others... That being said, against his will (as he's reminded me several times), I did get him to agree to get my son evaluated by a psychiatrist for yet a third opinion. He wants to pick the doctor and set up the appointment, though, and is now dragging his feet. But, I keep bugging him about it so eventually I think it will happen. In the mean time, he does let my son go to his counselor, so at least he's getting that need met. My girlfriend volunteers for "Safe Journey" (support for abused women) and has a list of lawyers in the area that I will definitely contact if need be... I have to step very carefully on eggshells with him, but as long as he's moving (even at his own slow, controlling pace) in the right direction, I keep hope! I play the game to let him think he's still in total control. I know I can't change him though. I'll keep you posted from time to time; it just helps knowing there's other people out there, unfortunately, going through the same things... Thank you and good luck to you and your son too!!!

My heart goes out to you... I am in the process right now of trying to get my 10 year old son treated with medication for anxiety and depression and my ex (control-freak, verbal abuser, etc.) says it's my problem etc... Both my son's pediatrician and psychologist have suggested meds, but my ex won't budge. I finally - after much arguing and pleading - got him to agree to have my son evaluated by a psychiatrist. Of course my ex put himself in charge of making that appt and hasn't done it yet. Keeps saying he's "working on it." I'm at my wits end. I don't think I'd get full custody because I've been told unless my ex is putting the children in harm, the court won't budge on it. We have 50/50 joint. Any suggestions????? Your ex sounds so much like mine!!!! And it's Bob and my son and other children in the same situation that end up suffering!!!!!

Beth, I wish I had something to offer you. The law varies from state to state (and county to county). I was lucky enough (?) to have an ex who demonstrated poor judgment (to put it mildly) in front of multiple witnesses on multiple occasions, enough for the judge to grant me sole legal custody (making me the sole decision-maker for Bob's medical care and education). Of course, even that has its limits--I can decide to treat him with medication, but I can't force his father to give it to him, nor will the state. I don't know where you live or the particulars of your custody agreement, but I would read your custody order until you know it inside and out. See if there's any way you can even have him talk to a therapist without your ex's consent. Talk to the school, they may have a district liaison or counselor. If you can, talk to an attorney about your agreement, see if there's any chance of getting a partial modification, or if there's any loophole that would allow you to seek treatment for your son without your ex's consent. I know legal help is ridiculously expensive and doesn't always work out in our favor AND doesn't always mean diddly squat (as I know too well). See if there's a legal aid organization in your area, or contact a local law school--attorneys in most states are required to perform a certain number of pro bono (free) service hours per year. Good luck, and take care of yourself and your son.