I have a big speech to give in two days. Fellowship Place in New Haven, CT, whose mission is to “help adults with mental illness lead more meaningful, fulfilling and healthy lives by offering resources, education, and opportunities,” has asked me to be their keynote speaker for their Eighth Annual Dr. Albert Solnit Memorial Lecture.

This is not so much a fundraiser as it is an awareness-raiser, and I want to do justice to that purpose as I prepare my part of the evening, an hour-long “Conversation with the Author of Ben Behind His Voices.”

My problem: how to tell our family’s story, and Ben’s story through our eyes, in a way that will raise awareness? And while I blog often about our current issues as Ben struggles through recovery, for this presentation I need to go back to the early years of his illness to set the stage for the conversation. 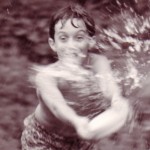 Sure, I went down memory lane to write the book, but here I will be telling it not through the written word but in person, and can use images and sounds to complete the picture. No recent photos, of course; Ben does not want this, and I honor that. He agreed to let me write the book, after all, as long as no current images or his real name were used. I can, however, use some childhood pictures, and I also have some of his writings and taped conversations from his teenage years, when schizophrenia began to emerge gradually.

The memories are hard to face, even now: Ben’s insistence that he had special gifts, that he could read minds, show up in likely places due to “time slips.” There is even a conversation where, in the middle of talking to be, he says, “Quiet, all of you!” Ben and I were the only ones in the room at the time.

I’d forgotten this incident; now I look back and think, how could I not have known what was wrong?

The answer” as NAMI tells us in Family-to-Family, “You can’t know what no one has told you.” Now I know that an educated family is one of the essentials of recovery for Ben – but then? I was drowning in confusion.

But if we had known earlier, treated it earlier - if one of the professionals had been able to see the truth – might we have saved a lot of heartache? Could we have avoided the psychotic breaks that may have caused brain cell loss?

We need more research. More definitive tests for mental illness would be on the wish list for sure. Meanwhile, signs and symptoms will have to do.

Mental Illness and Community: Does it Matter?
Antipsychotics and Mental Illness: the Great Debate
Ken
June, 29 2011 at 4:57 pm

i really dont know when my schizophrenia started. I usually think...when i was 33-34 years old because that's the time when it got really bad. But some days i (we) sit & think what about that day & what about that day when we did this? Was I crazy already then?
I dont know & it dont really make any difference I guess. I am certified & that's all i know. Its here for life and there aint any wishing that's going to take it away. So i deal with it. My ex-wife tells me "Its not that you cant get up early, its because you dont want to." I just let her think the things she thinks because i know i need my sleep. yes i sleep alot but between the meds and life as it is today, that's my life. If i go without my regular sleep of 10-12 hours a night/day, I almost feel as if its yesterday and im in a psychosis again. I didn't really enjoy the other times when i was living in psychotic-ville so why would i want to visit there again?
Ken

Hi Mirtha - Always glad to hear when someone is doing well. The original title of my book "Ben Behind His Voices" was "To Hell and Halfway Back" ...I"m sure you know what I meant by that. The "Hell" part was not knowing what could possibly be causing all the changes in my son.
Thanks for commenting!
Randye

Thanks for sharing. It is very true that the first symptoms are completely
shocking for us, partents. My son is now 43 years old and with his medicine he is doing well.
His onset was at his 21 years old, and was the worst nightmare of our lives.
Thank you.
mirtha

The beginning of Schizophrenia continues to remain a misunderstanding issue, both to professional circle and into general community, particulary. Moreover, this enigma damages chances for a successful early treatment of this disastrous mental disorder. To be more concrete, Shizophrenia presents a group of psychotic entities that imitate every mental disorder: from common anxious reactive condition to extremely agitate psychological derangement. But this one isn't the axis of confusion. It should to know that this serious disease in its onset didn't deteriorate the conscious and cognitive functions of respective person. Indeed, this psychosis unravel the co-ordinate of emotional discharge against the process of thinking. Again, this disbandment between feelings and thoughts grow up these person as cold and unpleasant in their relationship, even they previously were friendly and acceptable in social network. This fact in daily life often is ignored from parents or close relatives of patient under the pretext that their child isn't mad because he knows everything: calculation, computer, poetry, history, enigmatic... . Hence, the psycho-pathological process by time unmerciful progress, which destroys whole psychic function, where the chance for one satisfactory treatment decrease obviously.

Thanks for your valuable insight, as always!
Randye