Turns out, meditation is amazing and can help with your symptoms of adult attention-deficit/hyperactivity disorder (ADHD). Earlier this month, the New York Times' blog, Well, posted on the benefits of meditation for those of us with adult ADHD and whether it could work better than medication. Much of the research cited seemed to show that meditation can be a great addition to medication - and, even better, it can work just as well as medication. How the heck do those of us who can't pay attention well learn to pay attention long enough to meditate? 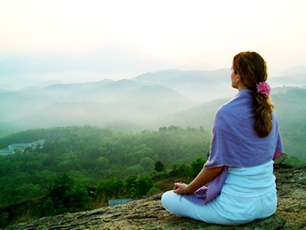 Meditation is super hard at first but anyone can become and expert. My first experience with meditation was during college. The therapist I was seeing at the time was amazing. We discussed cognitive therapy techniques and he taught me how to meditate. All I had to do was count in the number one (in my head) when I inhaled and think the word "calm" as I exhaled. I would count up to ten and then back down to one.

The Effect of Mindful Meditation and Breathing

I had always been afraid of the planes flying over my house. I grew up on Cape Cod and the air force base near there did fly overs all the time. I asked my Dad constantly what the noise was - what if it was a plane carrying a bomb? Really, though, my Dad would have no idea if there would have been a plane with a bomb. After about a month of meditating, though, I heard the same noises I had heard my whole life. Instead of jumping to be afraid, I did my mindful breathing and I stopped being afraid. It was amazing.

Then, a long break from meditation happened. Between the ages of 21 and 30, I have meditated sporadically. I am committed again, though, to make it a regular part of my life. I am starting with the book The Blooming of the Lotus by Thich Nhat Hanh. It has a load of good, simple meditations that are easy to follow. I've been doing it for a few days and I feel good. I feel centered during the meditation and I'm sure that it will eventually lead to feeling more centered outside my specific meditation time.

What experiences have you all had with meditation?

Great article Elizabeth! I've been taking courses on adult ADHD in Essex and my psychiatrist brought up this exact point and I think you have explained it very well!