Jerome et al released a study in 2006 titled What we know about ADHD and driving risk. The study was a meta-analysis, which means that it took the results from many studies and boiled them down to a single clinical bottom line. The meta-analysis showed that those of us with adult attention-deficit/hyperactivity disorder (ADHD) are, indeed, at far "higher than normal rates of negative driving outcomes." This doesn't mean we have higher rates of accidents, exactly, but can include citations, speeding tickets and the like. What do we do? 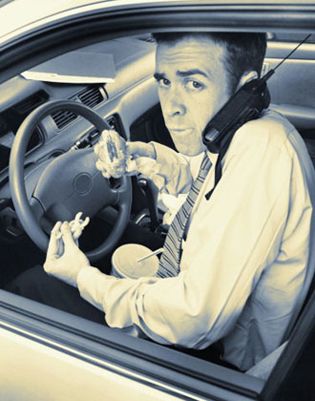 Not only is it illegal in most states to drive and talk/text on your phone, it can cost you big. I don't know about you, but I like having cheap insurance premiums thanks to my good driving record. I'll admit, I got into a large accident during my senior year high school. My parents' premiums were insane after that and I've definitely learned my lesson. I don't want to hurt anyone, myself, my car, or my now-good driving record. Put down the phone. Turn your ringer off so you won't know when someone is texting you. Whatever Joe did this morning that is super hilarious will be just as hilarious when you arrive at your destination and read the text. No, really.

It's more fun to do two things at once - and for a lot of us with adult ADHD, doing two things makes it easier to focus. Go to your local library or use the Overdrive program (a free download-y thing that's library based) and get a really good audiobook. Listening to an audiobook has the bonus that you're working on your auditory skills while driving. What a bang for your buck!

Also, when you switch radio stations constantly, you run the risk of having your eyes off the road for a long enough period to possibly cause damage to yourself and others. The audiobook CD will go for about an hour, which gives you a really good amount of listening for any commute. I recommend starting by listening to your favorite book, so you won't have to beat yourself up when you lose attention for periods. You'll still know the majority of what's happening.

I Use These ADHD Driving Tips

Not talking/texting on my phone and listening to audiobooks are things I do all the time while driving. My driving record was bad when I first started driving. I hit a parked car six days into having my license, a month later hit my brother's parked car and then maybe four months later had a highway accident. I'm lucky nothing bad happened other than monetary consequences. Start developing skills now to focus while driving and you'll be much better off in the long run!