One thing I've learned is to take action in alcohol recovery and stop arguing. Recent well-publicized articles criticizing 12-step programs have been making the social media rounds and set off another flurry of commentary and response (of which I'm a part). I'd like to suggest, however, doing something that in some ways is becoming easier and easier to avoid in the world of instant information--get off the Internet, stop arguing and take action for alcohol recovery.

A recent Atlantic article by author and journalist Gabrielle Glaser posited that Alcoholics Anonymous (AA) (and other 12-step groups) are unscientific, woefully outdated and terribly ineffective. This isn't the first time Glaser has criticized AA; she argued in her 2013 book that AA was ineffective for women. As someone who believes 12-step programs do much more good than harm, I felt defensiveness welling up inside me as I read her article. I disagree with much of the content and with the way the article is framed, although I do not believe AA is the only option for everyone who drinks too much. 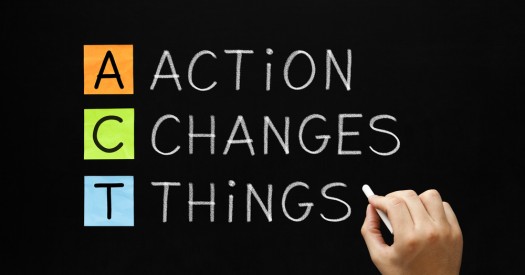 But really, who cares what I think? Who cares what Gabrielle Glaser thinks? If you have an alcohol problem, whether you have cirrhosis of the liver or are just concerned that you're getting a bit sloppier than you'd like, the only way to figure out what will help you is to try things and take action in alcohol recovery. At some point, you have to stop doing Internet research and start being proactive.

My Many Attempts to Stop Abusing Alcohol

I took a lot of action to attain alcohol recovery. I tried going to mental health therapy, I tried taking antidepressants (while still drinking), I tried learning all I could about addiction and alcohol's effects, and I tried inpatient rehab that incorporated various treatment models, including the 12-steps. I also attended 12-step meetings while continuing to drink. Some of these endeavors were helpful and some of them were completely useless but none of them dried me up, at least not right away.

As I've written about previously, I got sober in a rigorous outpatient program that involved confrontational therapy. As part of that program, which built a tight-knit therapeutic community, I also attended many 12-step meetings. When I transitioned out of that private program, 12-step groups were there to guide me and help keep me grounded. I don't know if I would have gotten sober eventually with 12-step groups alone, but I know they've given me a tremendous amount of support, understanding, empathy and positive direction.

The Science of Alcohol Abuse and the 12-Step Program

That being said, Glaser is absolutely correct that the 12-steps are not a scientific approach. Or perhaps, they are, in the sense that science is beginning to show that certain tenets of 12-step programs, such as letting go of resentments and being of service to others leads to healthier lives. But 12-step programs do not incorporate the latest research into their functioning. Glaser writes highly of naltrexone (ReVia), an opioid-inhibiting drug that may reduce alcohol cravings. Alcoholics Anonymous does not technically have an opinion on naltrexone, although some individual members might.

I would point out that being on the cutting edge of science isn't always the most effective path either. Scientific findings are constantly changing, contradicting information that was considered unassailable fact 10 or 20 years before. This is why I urge struggling alcohol users to try things for yourself. Stop searching for an opinion or a story that will vindicate you in your dislike for AA or your distrust of naltrexone. You simply cannot know if a treatment option will work for you by reading what somebody else has to say about it (including me).

If naltrexone turned your life around, great. If therapy sessions incorporating cognitive behavioral therapy have led you to a productive and fulfilling life, fantastic. If AA is the only path for you, wonderful. I believe 12-step programs have a tremendous amount to offer, but that doesn't mean they are the best fit for everybody or that members can look to 12-step programs to fill their every need. But when it comes to something as monumentally important as alcohol recovery, why take anyone else's word for it? Get out there and find what works for you.

Dual Diagnosis: Recovering from Depression and Alcoholism
Alcoholism Recovery is the Most Important Part of My Life