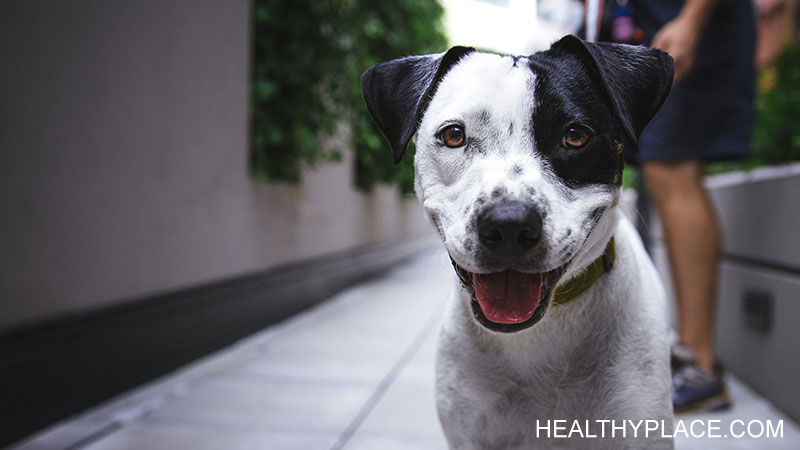 There are several reasons why spending time with animals helps with depression. Animal lovers and pet owners often say that their animal companions are good therapy for their mental health, but spending time with animals could have benefits beyond contact with the animals. Animals may help with depression, and it's a great idea to find out how it works.

Animals Help With Depression by Getting Us Into Nature

Most animals either live outdoors or need to spend time outside. Although no scientific studies have proven that animal or pet therapy for depression helps in itself, the evidence for ecotherapy is more conclusive. I worked for several months at a conservation charity where I saw the benefits for myself. Many adults came with quite severe mental health issues, including major depressive disorder, but the improvements achieved through regular time outdoors in nature were sometimes considerable. It seems that nature is a profound therapy for depression; animals help with depression because they are part of the natural world that we need to maintain good mental health.

From a personal perspective as an animal lover and pet owner, I do love cuddles with my pets, but a big benefit of having them is that to meet their needs I have to spend time outside. My dog needs walks, he needs playtime outside to work off his energy. I've never been a walking enthusiast and without a dog there's no way I'd just go out for a walk. Having an animal helps me when depression causes a lack of motivation. Plus, I get pleasure from seeing my dog splashing in a stream, running around in circles playing chase or fetching sticks.

As I've mentioned above, I wouldn't be a walker if it wasn't for being a dog owner. I also volunteer once a week at a local animal shelter, where there are rescued farm animals, including Larry the sheep, as well as cats and small animals. All the residents have personalities and they are so cheeky if they think they can get a biscuit or a Polo mint off you.

Our oldest sheep, Dotty the Hebridean, comes right up to you and stamps her little hoof with a "baa" when she knows there are biscuits in your pocket and they've not made their way into her mouth yet. Lambkins, rescued as an abandoned lamb, will jump up at the gate like a dog when she sees you coming. Larry loves to play and he's sometimes a bit naughty, headbutting your behind when you're not looking. Wilberforce the micro-pig has learned the same trick.

Every week I get a big dose of animal cuteness that never fails to cheer me up, and an animal's ability to make us feel better really helps with depression. Besides that, volunteering at the animal shelter is also hard physical exercise (Does Exercise Really Make A Difference In Combating Depression?). On an average volunteer shift, I'll have lugged at least one full wheelbarrow of horse poop from one end of the field to the other, carried a few buckets of water, made up feeds, cleaned cages, groomed the horse and mucked out the stable, pig arc and shelter for the older sheep. I might well get very wet if it's raining, as it often is in England. Somehow though, I never feel drained by a volunteer shift; I always feel better when I get home. I love the time I spend with the animals, but I also think that the exercise helps combat depression.

Like with my dog, the animals are my main motivator to get out of that door and get stuck into some exercise and time in nature - even if it means dealing with lots of poop. I'm an animal lover, so that in itself helps with depression, but for other people it might be something else. The key is to find that motivation despite depression to get outdoors and move around, especially with a beloved animal, because most of the time you'll feel better for it.

Avoid Disablist Language in Mental Health Discussions
Tips for Traveling with Depression to Avoid Anxiety
Kelly
November, 2 2017 at 5:24 am

At one point in my life my cats kept me from suicide. I know it seems strange, but I didn't think anyone could take care of them like I could and I didn't want to leave them behind. Many years later, I know my animals help me. Whether it is my dogs being SO happy to see me come home, or my cats purring in my lap, I know I feel better with them around.

Watching my dogs sleep and laying down next to them helps me relax and sleep.

I remember the genuine pronunciation of my respected professor-Polenakovic, that the nature is the best equipped scientific laboratory in the world. Nature is complex and still unrecognized subject of scientific research. So, animals as constitutive part of nature exhibit great and interesting field of humane knowledge. They are important part of ecosystem with substantial impact on healthy preservation of our world, where we live and work. Amid numerous positive effects on saving our planet, their presence and innocent liveliness improve mental welfare of any person. Depression, also ! It is advisable to use mindfully this opportunity of Animal Planet, through our take care of domestic and wild animals. On the other hand, the close contact with animals provides our organism with positive energy, that block up the development of depression, as negative aspect of modern life. In accordance with up to date mental health investigation, healthylifestyling implies outdoors staying than indoors one. These and others benefits from animals are enough reason to like animals.

I'm sure this is one of the key ways, to improve mental well being.
After getting my little hammy, it has certainty made me feel a tad better.
studentterrore.blogspot.co.uk/