I like Facebook, but, unfortunately, too much Facebook can actually worsen depression. Living with depression can make you feel lonely, and social media can be a useful tool for keeping up your interactions with others, especially when you’re not getting out much. But, there’s a downside too. A worsening of depression can come from too much Facebook.

Do you find yourself looking at other people’s status updates, photos and profiles and feeling like your own life never matches up? Do you feel like everyone else is having a better time than you? If so, you may be suffering from a common modern affliction known as “comparisonitis”. And if you have depression, comparing yourself to others' online lives can be dangerous.

Too much social media trawling can skew our perceptions of what other people’s lives are like. Take the snaps people put on of their “perfect vacation,” all laughing children frolicking in the waves and happy families on the beach. It’s important to remember that social media is an edited version of life. Of course they’ll post all the photos and videos of when the kids were being good and the weather was beautiful. There won’t be any of the Naomi Campbell-worthy tantrum the two-year-old threw on the plane or the day it rained for eight hours solid. People will only post what they want others to see and create a social media image that is the best version of their lives. It’s not necessarily reality.

It’s easy to share everything with your online friends these days, from what you had for your dinner to the daily shifting of your moods. I know this is ironic coming from someone who blogs publicly on the Internet about living with depression, but this comes from experience. Just because you can share it in 140 characters or less, it doesn’t mean you should.

As I used to say when I was in youth work to my groups, once it’s online, you don’t control it any more. I recommend not posting if you’re having a really bad day. It might make you feel better initially to get it out there, but it’s better to talk to someone you trust about how you are feeling, or phone a mental health helpline. You don’t need a permanent and public record of your worst days online. If you want to track your moods, you could use a mood diary that’s not accessible to anyone else.

Drama on Facebook Worsens Depression and Drains Your Emotional Energy 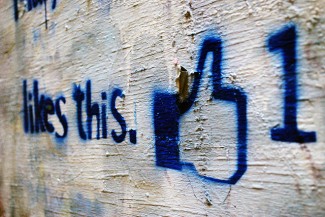 As well as being mindful of what we put on Facebook, we also need to set some limits on how much we engage with other people’s online dramas. My filters don’t work as well when I’m struggling with depression, so it’s harder not to rise to bait on social media. We all have those friends and contacts who like to shock, create controversy or overshare, but if you’re feeling fragile yourself, I’d advise not engaging. Hide their feeds if you have to. I recently had to do this with a friend and I felt a bit guilty, but I found the constant barrage of posts stressful. If a friend really needs you, they’ll call you, they won’t tweet you. And if you’re not spending your time engaging with unnecessary contrived drama, then you’ll have the energy to be there for the people who matter.

APA Reference
Smith, L. (2015, July 3). Too Much Facebook Can Worsen Depression, HealthyPlace. Retrieved on 2022, May 26 from https://www.healthyplace.com/blogs/copingwithdepression/2015/07/got-depression-shut-your-facebook

At times , I feel I'd should delete my facebook . Nothing but drama,in my opinion. I was a much happier person ,when I wasn't on facebook. The only reason why I am on because of my some members of my family, being so far away . There are a few, that I would like to keep in touch. Some people post too, much of their good fortune . Just to brag, and then you have people making negative comments,as they did , back , in high school again. Just to get under your skin. Who needs it bullying on facebook . A family member can be just as nasty,and critical . Who needs it . The less time I am on it the better .Now I am thinking ,it's best for me to delete it . END OF this DEBATE .

Facebook as potent social media has invaded every person, on any time and on each place all over the world. Thus it has became common activity in up to date society. With its greats tele-inter-personal performances FB social media has overloaded mental and emotional energy of each person, particularly person with depression, as downfall category of mentally ill population. In a word we are victims of its overuse, because through virtual relationship we had dramatically drained natural interpersonal relation, as primary emotionally feed. Depressive people have insufficient emotional energy and if they consume this on FB, then its weak mood will become desert. I agree with your objection, that over share of personal end emotional experiences leads to syndrome of " Comparisonitis", which one exessively smash their negative emotional state. In conclusion, it ought to use mindfully this common social media, with strict limits and personal needs, in order to strength self-esteem as counter-poison of depressive disorder.

It's good to see that others can see through the facade of social media and can either use it in a healthy way without obsessing or just quit it, if that's what makes you happier. Nobody should feel they have to be on social media or to engage with anybody on there. I found that sometimes the expectations from other people about whether you would "Like" something or comment on it were the hardest to deal with. Many people seem to need a lot of validation on social media.

I used to cry when I saw photos of friends of mine from my country of origin at parties with many friends around them. I started to ask myself, why did I leave my country, they all look so happy there, and I don't have many friends here. My feeling spiralled into the most negatives. I didn't stop Facebook, but I learnt to take EVERYTHING with a grain of salt. I believe that the computer in general maintains people in isolation, something very bad for people with depression!

I also discovered that Facebook can set off triggers- when you involve yourself in hypothetical arguments which have nothing to do with you per se-it can likewise drive you into mania. I likewise have made a decision not to involve myself in other peoples' dramas on the system, as it is harmful for me. If it's not a positive message, I delete the poster. There are far too many people out there selling a negative agenda on the network, in my opinion.

Hi, thanks for the post! I'm in a tricky situation regarding Facebook and depression. Recently I was diagnosed with depression, something I have felt I've had for a few years, though it has always been under control until as of late. I deleted Facebook in February. I was annoyed with comparing my life with others, I would feel down because other people have better things. I would see my family share pictures of parties of family parties that I was never invited to. Basically, Facebook made me feel alone. However, when I deleted Facebook, I felt really disconnected with the world. Only three of four of my friends would keep in touch, the rest didn't actually do anything (whether this means they're not real friends, that's for another debate). So while I have depression, I find Facebook can be a two sided sword. Lately, I've started writing my own blog about depression, in the format of a diary. It's a tricky one, isn't it?