Self-Injury 101: Why Some People with BPD Self-Injure

Self-injury is one of the major symptoms of borderline personality disorder (BPD). It is so characteristic of the disorder that some mental health professionals will diagnose a patient of having BPD even if no other symptoms are present. But many people are still in the dark about self-injury: why people self-injure, what self-injury accomplishes, and how to approach someone who self-injures. 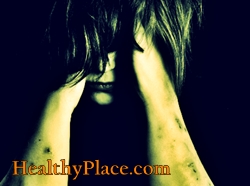 Self-injury is a deliberate act of harming oneself with the paradoxical hope that injury to the body will dull mental and emotional pain. Contrary to popular belief, it is not a suicide attempt. It’s uncertain how many Americans do this: a University of Missouri—Columbia study reported that nearly three million Americans engage in self-injury, a Time article reported two million did so. Regardless of the number, it is a serious problem.

The first high-profile individual to admit she self-injured was the late Lady Diana Spencer (aka Princess Di). She gave one of the best descriptions I've ever heard of self-injury: “You have so much pain inside yourself that you try and hurt yourself on the outside because you want help.”

I personally self-injure to gain strength. According to my twisted logic, if I’m not afraid of pain, I can override the pain from the current situation and take action.

Self-injury is all about survival. It is a way to give voice to the unspeakable. It is a way to ease pain. Remember that and you can understand--intellectually, at least.

People who self-injure don't do it to die, although there is a link between self-injury and suicide. They don't do it for attention. They do it as a coping skill--a negative coping skill, to be sure, but a coping skill all the same. As Fiona Apple says, ""It was never, like, 'I am going to hurt myself and put myself in the hospital.' ...It is that I am going to give myself the pain that I need to feel to put the punctuation on this [expletive] that's going inside."

Musician Richey Edwards wrote ""When I cut myself I feel so much better. All the little things that might have been annoying me suddenly seem so trivial because I'm concentrating on the pain. "

He continued "It's all about self-discipline. Like, self-obsession is connected completely with self-loathing, and it's the same with, um, if you've got a weight problem. It's all about... finding some worth in yourself, knowing that you've got the discipline to do it, and knowing that other people maybe can't do it. And it's also, I think, really connected to the fact that you almost feel, like, silent, you have no voice, you're mute, there's just no, you've got no option' Even if you could express yourself nobody would listen anyway' Things that go on inside you, there's no other way to get rid of them."

How to approach someone who self-injures

In If Nobody Speaks of Remarkable Things, John McGregor writes "I wanted someone to see me, I wanted someone to come rushing in, to take hold of me and say hey hey what are you doing, hey come on, what’s wrong." This is the best way to approach someone who self-injures: to talk to them and ask what's wrong.

Don't judge. Don't assume the person is faking it. Don't assume it's all for attention. Try to understand that the person is in pain and try to help them find another way to deal with it. Refer the person to a therapist if necessary, or ask them to call their therapist. Set limits, but don't give an ultimatum. Educate yourself. But most importantly, be there.

Deep inside, while it may be difficult to talk about, we want to talk. Please listen.

APA Reference
Oberg, B. (2012, December 11). Self-Injury 101: Why Some People with BPD Self-Injure, HealthyPlace. Retrieved on 2022, September 29 from https://www.healthyplace.com/blogs/borderline/2012/12/self-injury-101-why-some-people-with-bpd-self-injure

I am always amazed by people who think, "Oh, s/he's just doing it to get attention."
Well, ok, if someone needs attention so badly as to do that, then please - give them some good quality attention.