It's bad enough to be a trauma survivor with symptoms of borderline personality disorder (BPD). However, sometimes people hurt us further when we reach out for help--this is called "secondary wounding".

What is secondary wounding? 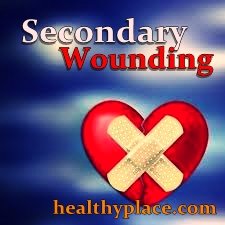 According to Dr. Aphrodite Matsakis' classic I Can't Get Over It, secondary wounding can occur in many forms. People may disbelieve or deny the trauma; for example, someone may say "That could never happen" or "You're making a mountain out of a molehill." In addition to denial and disbelief, there is also minimizing. Minimizing occurs when people discount a trauma survivor's reaction to the event, saying "It shouldn't affect you this much."

Blaming the victim is also common, especially in sexual assault cases. We've all heard "Look at the way she dresses" or "She was flirting". Blaming the victim, according to Matsakis, further increases the victim's sense of self-esteem and fuels the fires of self-blame.

Stigmatization is also common. This occurs when people treat us as less of a person because of our illness. An example is "If you just had enough faith and wanted to be better, you would be."

Finally, denial of assistance is a form of secondary wounding. An example is trying to get disability benefits and being told that you weren't hurt enough.

Many times, ignorance is a cause of secondary wounding. The person simply doesn't understand. People who have never been hurt can not emphasize with someone who has been deeply wounded.

Burnout is another cause--the helping professionals may be emotionally depleted and therefore unable to empathize. They may cause secondary wounding in order to keep their own system of denial intact.

The "just world" philosophy is another cause of secondary wounding. According to this philosophy, people get what they deserve. If you are moral enough, you can avoid misfortune. If you are immoral, you will suffer. It would be nice if this were true, but it's not. As Jesus said, it rains on both the righteous and unrighteous, and the sun shines on both the righteous and unrighteous.

Finally, cultural influences can cause secondary wounding. The U.S. was founded by rugged individualists. We pride ourselves on overcoming hardship to succeed. We believe that man can be master of his own fate. Sadly, some things are out of our control--but that does not jive with the American Dream. Try being fatalistic and see what happens.

So how do we do that?

A question-and-answer session with a journal or competent therapist is a good place to start. Matsakis recommends asking the following questions:

Borderline Personality Disorder and the "I Let It Happen" Myth
Hot Enough For You? Psychiatric Medications and Heat Exhaustion
Kathleen Brannon
August, 2 2012 at 4:06 pm

I haven't heard this term before, but I have so many secondary wounds they almost cover up the primary ones! Starting with my mother who blamed me for being depressed as a child (and who denied any pain I felt from our terrible early childhood relationship) to friends over the years who dropped me because they "just don't think I'm really ill" or they felt I should "just stop" the behaviors and emotions to many, many psychiatrists, psychologists, nurses, social workers in hospital settings who pretty much hated people with BPD because we made their job harder or their actions less successful or they just plain lacked empathy. As a result, if I am hospitalized I dissociate and become my "Crazy Self" who is a classic mental patient. I keep telling them I have PTSD where the trauma was hospitalization in psych units. It's true. It happens. They should give those people training on how not to traumatize people -- "secondarily wound" them. Thanks for this posting.

This has been the story of my life lately. I've heard all the platitudes.. "i think you like being miserable", "why don't you just snap out of it".."get over it already..that was the past"..."You're depressing me"..."You walk around here all depressed..you don't see me walking around all depressed..." rolls my eyes. What's worse...that's MY HUSBAND telling me those things. Imagine how hurtful that is!!!! And the more i try to explain, the more he doesn't listen and just blames it all on me. I keep telling him to go find someone "normal"..but he says he loves me... yeah, right.. then why say stuff like that?