The Stigma of Social Security Disability for Mental Illness 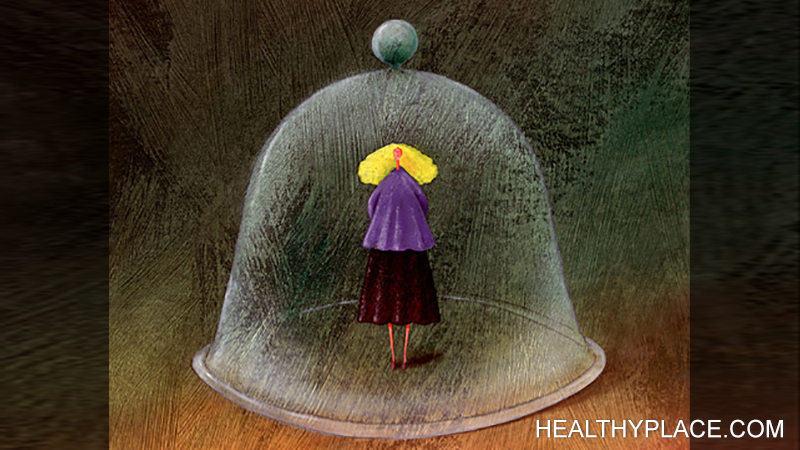 Yet there remains a stigma not only to mental illness in and of itself, but also being disabled because of it. We're often assumed to be lazy and conning the system--after all, we don't have a trace of a visible illness. We don't look sick. We should be able to work.

The sad thing is people don't see the aftermath of what happens when we try to work. Being overwhelmed and exhausted is common, but not a good way to keep your job. Getting fired is a common fate; I've lost one job and was discharged from the Army due to my illness. It's seen as a discipline issue, not as a health issue.

I've noticed that the stigma is the worst among the religious crowd. There's even a joke about it; the short version is that Jesus is healing people when one says "Get away from me; I'm on disability." It's as if the religious crowd believes we choose to be sick, when the truth is nobody in their right mind would choose to have a mental illness.

Last night, a local ministry stopped by my apartment to bring pizza. Once they started talking about mental illness, I questioned whether the free pizza was worth it. They claimed that Jesus could heal any illness and that if I had enough faith Jesus would heal me from demonic attack. "By his stripes we are healed," after all.

The sad thing is this stigma can lead to the illness getting worse. My ex-fiance went off his medication, claiming "Medication can't do nothing Jesus can't do." Long story short, that's why he's now an ex. He violated a court order for treatment, skipped the state, got married, got divorced, and is now on his second marriage before age 30--probably none of which would have happened had he stayed on his medication.

When he was in college, my youngest brother worked on fighting the stigma of disability. Every time someone made a disparaging comment, he would tell my story: that his sister couldn't work because she'd lose her disability insurance, then wouldn't be able to afford her medication, then wouldn't be able to work due to her now-untreated disability. I was about to tell him I appreciated this when he said "But I don't tell them you have a mental illness. I tell them you have diabetes. Otherwise they wouldn't understand."

I recently finished acting in a play called Nobody Needs to Know by Carol Bozena. The play addresses stigma as an issue we all have some control over. While disability is not directly addressed, there is a line in which a relative accuses a major character of being lazy and "using this depression as a vacation from your responsibilities." Ironically, a similarly-harsh social worker calls treatment "the hardest work you've ever done."

When I was waiting for my discharge from the Army, one of my buddies made a stigmatizing comment about mental illness. I explained that our brains are like a circuit--that under normal circumstances, they worked fine, but when they short-circuited due to a chemical imbalance, we became ill. It was a physical condition that manifested itself in the emotions.

Like it or not, it is up to us to educate people about mental illness. And that starts by addressing the stigma.

APA Reference
Oberg, B. (2012, June 5). The Stigma of Social Security Disability for Mental Illness, HealthyPlace. Retrieved on 2021, January 27 from https://www.healthyplace.com/blogs/borderline/2012/06/the-stigma-of-disability

How Pharmaceutical Companies Can Improve Our Medications
An Open Letter to My Addiction
Virginia
July, 18 2012 at 6:11 pm

Right above my right elbow is where it grips with pressure so shocking the protest is lost in my throat..my Borderline Denial is a clawing, grasping and fumbling force constantly using deceptions so that I may slow my trickle of reality based thoughts enough for it to get the grip it needs to spin me into a full fact confrontation whose bare mirrored obscenities seal the need to go screaming for the shade of my alter fanasty life I keep running like an old projector I can find comfort in hearing the reels spin knowing when the paper people start their paper cutting I can walk into the dark room illumenated by the projector who plays out my life in real time but perfect like the paper people say it should look. Whoever my paper lover is that day will hold me and confirm my safety for I am cherished and let my eyes rest from lies listening to him mummer the story of my at sea rescue. Now I can act paper again and hold the paper hands beside me.
I titled this poem paper doll chain
I have BPD. I am exhausted of trying to fix myself so I can live in this pile of shit. I cannot remember what being ok felt like but I leave myself notes that read this cut will close you will not break and I know I did not feel like this when I had the foresight to write those. Thank you for your bravery in being a kindley lite corner.

I enjoyed so much reading this blog, Becky. You are a wonderful person and a great blogger.