Harmful Core Beliefs and How to Change Them 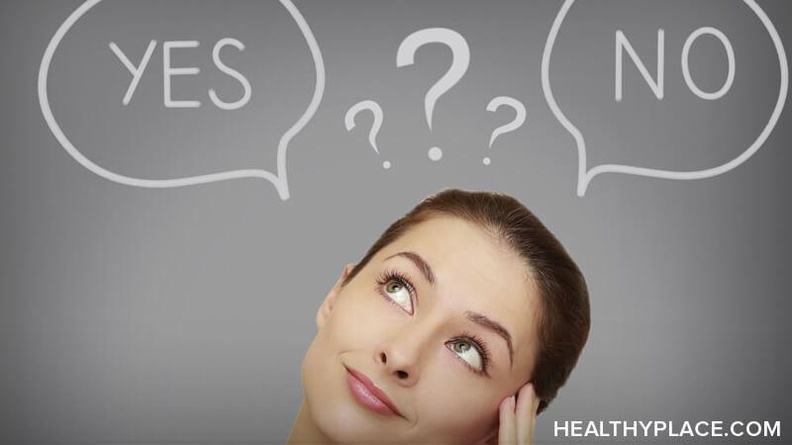 One of the problems with borderline personality disorder (BPD) is the ease with which we believe harmful core beliefs. It's as if we think that they are the insight of the century. But believing something does not automatically make it true--not everything you think is trustworthy. Here are six steps to changing a harmful core belief.

This requires some introspection. Identify the core belief that underlies your distress and behavior. There may be more than one, but for now we'll focus on one at a time. An example of a negative core belief is "I can't trust anybody."

Step 2: Examine the evidence that supports the belief.

What in your experience backs up the belief? An example might be "My friends from church broke confidentiality about my getting kicked off a mission trip team after promising they wouldn't."

Step 3: Challenge the evidence behind the harmful core belief.

Challenge the evidence. Was there another explanation? Were you really responsible or does blame belong somewhere else? Are you applying what you've learned about one situation to another? Are you filtering, or seeing only the evidence you want to see?

Even in clear cases of support for a negative core belief, there will be evidence challenging it. An example might be "My therapist keeps confidentiality. Even though my church friends didn't honor their promise to keep silent, my therapist keeps quiet about everything not involving danger to self or others."

Step 4: Re-state the belief to include the new evidence.

Take in all the evidence. Restate your belief to include all of the evidence. This new belief will not be rigid; rather, it will be more flexible and therefore more accurate. An example might be "There are some people I can trust" instead of "I can't trust anybody." List the evidence for this modified belief. Use what you've learned in therapy.

The liberating part of this step is that the new core belief allows you to believe the best, not the worst. You are no longer caught in a miserable belief. It allows you to escape the "black or white thinking" common to BPD.

Don't believe me? Which would you rather believe--that the world is hostile, or that there are good people out there? Either way, you're probably right. If you believe the world is hostile, you will find evidence (albeit filtered) to confirm that belief. If you believe there are good people out there, you will find it is easier to trust the people you need to trust--your psychiatrist, your therapist, and so on. This is extremely liberating.

An example might be trusting someone with inconsequential information and seeing what happens. When you confide that you're annoyed by people singing showtunes, do they keep it secret? If they do, you've found a person who may be trustworthy. If they don't, well--how many times can someone sing When the Foe-Man Bares His Steel?

You've discovered one person who can't be trusted. Try another person. Eventually you will find someone who can be trusted.

Record how you feel about doing this and about the outcome. A written record of evidence for the new core belief is vital to maintaining that belief. The old core belief had a lot of "evidence", so the new core belief should as well. This also allows you to restate the belief as necessary.

APA Reference
Oberg, B. (2011, November 18). Harmful Core Beliefs and How to Change Them, HealthyPlace. Retrieved on 2022, June 30 from https://www.healthyplace.com/blogs/borderline/2011/11/core-beliefs-and-how-to-change-them