BPD and Catastrophizing: Is It Worth It?

Recently, my computer suffered a small explosion. As I tried to transfer some files, I heard a loud bang and saw smoke rising from the CPU fan. At first I panicked--a common reaction for anyone, but especially common for people with borderline personality disorder (BPD). It was tempting to assume a worst-case scenario, or catastrophize the situation. Would I lose my job as a freelancer? How would I pay for a new computer? What would I do in the meantime?

Sound familiar? Many people with BPD can see things as a lot worse than they actually are, which can trigger other psychiatric symptoms.

It's Watching Me with Beady Little Eyes 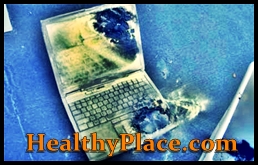 The computer blew up around my bedtime. As I lay on my bed, I realized I was watching the computer out of one eye. I believed it was plotting to kill me as soon as I fell asleep. I also realized that this was an irrational thought.

This works for false beliefs, whether they are "I destroyed the computer" to "I mess up everything I touch". In order to challenge these beliefs, we need to look logically at the evidence. When we look at the evidence, we can either confirm or refute the belief. For example, you can argue against "I mess up everything I touch" by thinking of things you have accomplished. For example, you've learned to read this post--you didn't mess that up. You can write a comment if you choose to do so--you didn't mess that up.

Catastrophic Thinking: It's the End of the World!

When my computer began to have pre-explosion problems, I started to panic. A software issue was going to cost me $200. I didn't have the money, and even if I did, why sink it into a six-year-old computer? But like a runaway train, I began to picture the absolute worst case scenario: losing all my writing jobs, pawning my possessions to get the money to repair or replace the computer, and so forth.

I fought back by making possible plans. For example, I could go to the library and use their computers to write my posts or do my research. I could borrow some money from family members to repair or replace. I could ask for repairs or a replacement for my birthday in September. Once I began to form realistic plans, I calmed down and realized that things weren't as bad as my BPD mind was making them out to be.

Sometimes things go horrifically wrong, but I believe every problem has a solution. It may not be an easy solution, and you may not like the solution, but it's there. In spite of what you feel, it's not the end of the world.

There's a big difference between whether a feeling is valid and whether it is true. All feelings are valid simply because that's the way you feel. You can't always control that. You can, however, control how you act on your feelings.

While your feelings are valid, they may not be true. They may be a result of interpreting the situation incorrectly, or they may be inappropriate for the situation. For example, you may feel frightened when you see a green dress because you were wearing a green dress when you were raped. The feeling is valid, but not an accurate response because you're not back there now. By reminding yourself of this fact, you can eventually overcome the fear.

A friend of mine asked me what the most important thing I learned in the BASE program was. I thought for a moment, then said "I learned to ask myself 'Is it worth it'?" Ask yourself "Is it worth panicking? Is it worth my reaction? Is this really a catastrophe?"

More often than not, the answer is no. Respond appropriately.

APA Reference
Oberg, B. (2011, June 1). BPD and Catastrophizing: Is It Worth It?, HealthyPlace. Retrieved on 2022, May 24 from https://www.healthyplace.com/blogs/borderline/2011/06/bpd-and-catastrophizing-is-it-worth-it